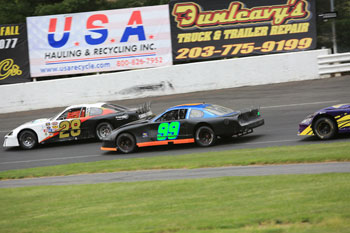 (Stafford Springs, CT)—Although he has only made 2 starts thus far in Stafford Speedway’s Late Model division in 2017, Chase Cook, driver of the #99 Erasable Images Powerwashing Chevrolet, heads into this Friday night, July 21st, looking for his third consecutive top-10 finish. The Oakdale native began his racing career in the quarter midget ranks at both the Little T and Silver City Speedways before a gamble landed him in Stafford’s Late Model division as a rookie driver in 2015.

“I ran a full season of quarter midgets at Little T and then a few seasons at Silver City,” said Cook. “I got started with the Late Model back when Michael Bennett sold his car to my dad. Once that happened, my cousin and myself asked my dad if we could come up with some money to fund the car ourselves, could we race his old car, which was a back up. He said that if we could come up with the money, not really believing that we could do it, and we really didn’t think we could do it ourselves either, then we could go racing. We were able to come up with some sponsorship and that’s how I got started racing Late Models. It was almost a joke on our part asking him in the first place, but we went around to some local businesses in our area and found some sponsors willing to help us out.”

Between balancing commitments to school and football, Cook has yet to record a full season behind the wheel of the #99 machine. Cook finished 11th in the points standings during his rookie season of 2015 with 4 top-10 finishes in 17 starts and he finished 12th in the points last season with 4 more top-10 finishes while only making 11 starts. With another limited schedule this season, Cook has recorded top-10 finishes in each of his first two starts and he is looking to build on that during his remaining starts in 2017. 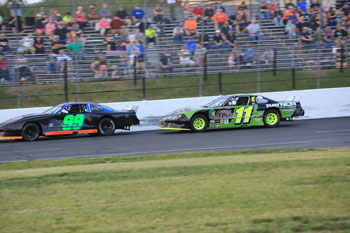 “A good result for us would be to finish the year out with the car in one piece and be able to come back after August and September to run the Fall Final,” said Cook. “I think we’re looking at running until about mid August before the Fall Final. We’ve been trying to figure the car out this season and we’ve been working with Jay Stuart with some stuff. I’m hoping that this week we can really show what we’ve got and what we’ve been working up to. There’s always room to learn something about the car. I have to give a big thank you to JMD Chassis and Jay Stuart, Erasable Images Powerwashing, Eco Blast, my Dad, my Uncle Jimmy, and my two good friends Cody and Keator. Being able to work with Jay, I’m very thankful for that. He’s only about 2 miles down the road from us so knowing that he’s right there if we have any questions or need any help, I’m very thankful to have him there to help us out.”

With another limited schedule ahead of him, Cook’s plan is to go all out and get the best possible finishes they can. Cook’s father Scott scored his lone Late Model victory at Stafford back in 2007 and Cook says he is literally speechless at the thought of what his emotions would be if he could one day join his father on the Late Model feature winners list. 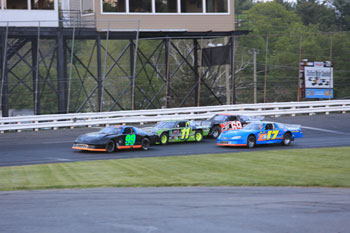 “Based off this season, if we can get consecutive top-5 finishes, we’d be more than happy,” said Cook. “If we could burn off a third, second, or even a win, that would be icing on the cake for us. I honestly have no clue how I would feel if we were able to get a win. This division is tough, it’s no joke. You’re racing against the best of the best like Tom Fearn, Michael Bennett, Kevin Gambacorta, there’s a lot of experienced guys so you’re going to have to give it everything you have just to get a top-5. They all know what they’re doing. But nothing beats being able to work in the shop with your friends and family on a weeknight after work having fun. The day you stop having fun is the day you should stop racing. I’d love to be able to keep on racing for a long time, it’s very addicting. This season is just me and my Uncle Jim and we figured since we’re only going to take part in a few races with a limited budget, we figured lets go full out and try to make these races our best races we’ve ever had.”

During his senior year at Old Saybrook-Westbrook High School, Cook ran for over 1,200 and 17 touchdowns as a running back and he says there are a lot of parallels between football and racing. 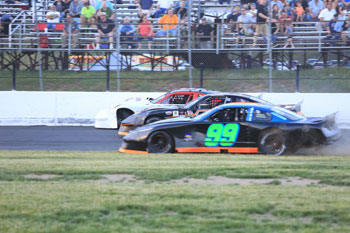 “I think there’s a lot of similarities between football and racing,” said Cook. “You need to have a competitive edge for sure but you also have to have respect. Although you’re in different cars, you’re all in the same division so it’s like you’re all on the same team. You have to be able to work well with others because that’s what’s going to help you in the long run knowing you have someone’s back and they have your back. Within your team, everyone has to be on the same page and get along because that’s what will get you going well.”

This Friday night, July 21st will see the Exit Realty Modified Touring Series join Stafford’s weekly divisions in feature action as part of the Lincoln Tech 100 program. Tickets for the Lincoln Tech 100 are available and on sale now at the Stafford Speedway box office. Tickets are priced at $30.00 for adult general admission tickets, $5.00 for children ages 6-14, and children ages 5 and under are admitted free of charge when accompanied by an adult. Reserved seat tickets are $32.00 for all ages. All ticket prices include 10% CT Admission Tax. Stafford Motor Speedway offers plenty of free parking along with overnight parking available for self contained Recreational Vehicles. Stafford’s five NASCAR Whelen All-American Series divisions will join the Exit Realty Modified Touring Series in feature action.