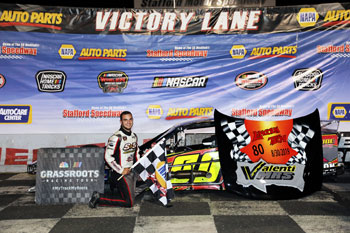 (Stafford Springs, CT)—The Valenti Modified Racing Series returned to Stafford Motor Speedway on Friday, August 30th for the Lincoln Tech VMRS 80. Chase Dowling took the lead on lap-24 of the 80-lap event and he led the rest of the way, holding off Keith Rocco on several late restarts to win the Lincoln Tech 80.

The race took the green flag with Cam McDermott going outside polesitter Brad VanHouten to take the early race lead. Chase Dowling was quickly took second with Ronnie Williams coming up to third. Keith Rocco was fourth with Matt Galko up to fifth as VanHouten was side by side with Les Hinckley, Jr. for sixth place on lap-5.

Dowling made a power move to the outside of McDermott going into turn 3 on lap-24 to move into the lead. Williams followed him into second and it appeared that McDermott’s car began to drop off the pace and he pulled on pit road on lap-26. Rocco was now third behind Dowling and Williams with Galko fourth and Flannery fifth.

With 45 laps complete Dowling was still in command with Williams, Rocco, Galko, Flannery, and Lashua lined up behind him. Etheridge was now seventh followed by Nocella, Hinckley, and Mike Willis, Jr. to make up the top-10.

Dowling was still comfortably in the lead with 10 laps to go with Williams, Rocco, Galko, and Flannery all still giving chase. Lashua, Etheridge, Nocella, Willis, and Dan Meservey, Jr. made up the top-10. The complexion of the race changed drastically when the caution came out with 75 laps complete for George Sherman, who came to a stop in the turn 4 grass to set up a 5-lap sprint to the finish.

DiMatteo and VanHouten both spun on the backstretch to bring the caution back out on the restart. The next restart saw spins in turn 4 by Etheridge and Meservey. Dowling took the lead on the third restart with Williams in second. Williams dropped off the pace with a flat right front tire and was limping back to pit road when the caution came back out with 76 laps complete. Williams’s misfortune put Rocco alongside Dowling for the next restart with Flannery and Owen making up the second row.

Dowling took the lead on the restart with Rocco in second and Galko in third. Rocco couldn’t get close enough to Dowling to make a move as Dowling took the checkered flag to win the Lincoln Tech 80. Galko finished third behind Dowling and Rocco with Flannery and Hinckley rounding out the top-5.