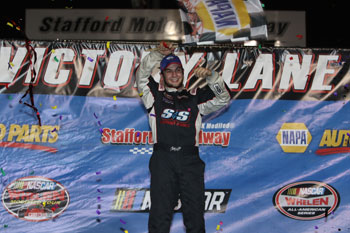 (Stafford Springs, CT)—After posting 4 wins and finishing second in the 2017 SK Modified® standings at Stafford, Roxbury, CT native Chase Dowling has changed plans for the 2018 season.  With the help of Ben Dodge and the support of his sponsors, Dowling is set to run for the 2018 SK Modified® championship at Stafford.

“We had a deal to race this year, but that fell through,” said Dowling. “I really wanted to race SK’s this year and thanks to the help of Ben Dodge along with my sponsors Wicked Powersports, S & S Asphalt Paving, Hocon Industrial Gas, and Carrigan Heating and Air Conditioning, we were able to find a car and put a deal together at the last minute. Ben Dodge has been the shoulder that I’ve been leaning on for the past month. He always told me if I ever needed someone to talk to, I should give him a call. We numbered the car 36 in his honor, which is a number that has a lot of meaning for Ben. We’re basically running this deal like we did with my family operation a couple years ago and working on the car every day up here at the shop. There hasn’t really been an LFR car full-time at Stafford so I’m pretty excited to see what we can bring this season. It’s a bit of short notice, but we run the business during the day and then I’m picking away at the car every night. We’re in pretty good shape right now and we’ll be ready to go for the Sizzler.”

Despite the short time left before the first green flag of the 2018 season at the NAPA Auto Parts Spring Sizzler® on April 28-29, Dowling will be ready to hit the track full speed ahead. Dowling also isn’t worried about the lack of track time in the SK Modified® division with an LFR Chassis car. 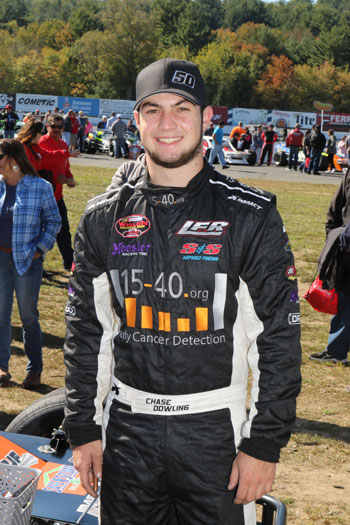 “I think we’ll be pretty good,” said Dowling. “We’ve never really had an LFR car competing at Stafford so we’re starting with a small notebook for the SK and it’s going to be a learning curve for a little while. I’m sure we’ll get it figured out and Rob Fuller is giving us a lot of time and effort in setting the car up so I don’t think it’ll be too long before we can get back to victory lane. We have all the resources we need behind us to do good. It might be a couple of races before we get the setup down. I think we’ll be a contender every week once the season gets rolling and we’ll see at the end of the year if we’re in the hunt for the championship or not.”

In addition to his new SK Modified® ride, Dowling is making a return to full-time status on the NASCAR Whelen Modified Tour with Rob Fuller Racing and the #15 machine. Dowling ran the NAPA Spring Sizzler® and the NAPA Fall Final last year at Stafford and he notched a podium effort with a 3rd place finish in the Sizzler® and he finished 4th in the Fall Final. Now in his fourth season on the Tour, Dowling is still in search of his first career Tour victory and he would like nothing more than for his first win to come at Stafford in “The Greatest Race in the History of Spring.”

With new rules in place for pit stops where teams can only change one tire per stop, Dowling says that it’s anyone’s guess as to who will take the checkered flag. With the race distance being 200 laps, there will also be a pit stop for teams to take fuel and teams cannot take fuel and change tires in the same stop.

“I think that the pit rules will put a lot on the teams with strategy calls,” said Dowling. “We had the new rules in place last year and I think you’re going to see a lot of different leaders and people on different strategies with getting tires at different points of the race. This will make for a great race for the fans to watch. It seemed like in the past the guys with the dominant cars ended up back at the front at the end of the race but this year I think you might see guys with a dominant car hanging on with older tires at the end with some guys making a late charge with fresher tires.”

The 47th Annual NAPA Spring Sizzler® is set for April 28-29. Tickets for the “Greatest Race in the History of Spring” are on sale now at the Speedway Box Office. Tickets are priced at $40.00 for adult general admission tickets, $5.00 for children ages 6-14, and children ages 5 and under are admitted free of charge when accompanied by an adult. Reserved seating is priced at $42.00 for all ages. As always, Stafford Motor Speedway offers free parking with overnight parking available. Tickets are good for both Saturday and Sunday admission. All ticket prices include 10% CT Admission Tax. Discount Tickets are now available at participating NAPA Auto Parts stores. For a full list of the 72 participating locations throughout Connecticut, Massachusetts, New York, Rhode Island, and Vermont, please call the speedway office or visit us on the web at www.staffordmotorspeedway.com/participating-napa-auto-parts-stores.

For more information, or to order tickets for the 47th Annual NAPA Auto Parts Spring Sizzler®, contact the Stafford Motor Speedway track office at 860-684-2783 or visit us on the web at www.staffordspeedway.com.