(Stafford Springs, CT)—Stafford Speedway returned to NASCAR Whelen All-American Series racing action with the 4th Annual NAPA Auto Parts SK 5k, which paid the winner $5,000 out of a purse of over $27,000. With the Dunleavy’s Truck and Trailer Sales Gambler’s Challenge bonus of $5,300 and a total heat race bonus of $2,000 from Wheelers Auto of Hamden, the total posted awards were over $34,000.  The Gambler’s Challenge had four different possible outcomes and in NAPA Victory Lane, Doug Dunleavy pulled the split among the 6th through 10th place finishers option, giving Dowling a total payday of $5,675 in purse and contingencies.  Dunleavy also arranged for several lap leader prizes with Michael Gervais, Jr. winning a $50 Home Depot gift card from Robert Yates Racing for leading lap-25, while Dowling won $250 from Newtown Pools for leading lap-50 and a $100 gift card to Lowe’s from Robert Yates Racing for leading lap-75.  In other feature action, Michael Bennett won the Late Model feature, Wesley Prucker was a first time winner in the SK Light feature, R.J. Surdell was a first time winner in the Limited Late Model division, and Vince Gambacorta won the DARE Stock feature for his first Stafford victory since the 2006 NAPA Fall Final. 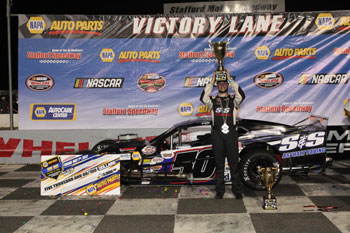 Rocco went around Reen to move into third on lap-11 as Gervais was comfortably a half second ahead of McDermott in the battle for the race lead. Josh Wood dropped off the pace and he brought his car behind the wall on lap-17 and looked to be finished for the night. Chase Dowling cracked into the top-10 as he was slowly working his way towards the front.

With 25 laps complete, Gervais was still in command with McDermott, Rocco, Reen, Pennink, Owen, Dowling, Izzo, Mike Christopher, Jr., and Ryan Preece making up the top-5. Dylan Izzo spun coming out of turn 2 to bring the caution out with 26 laps complete.

Gervais took the lead on the restart with Rocco pulling alongside. The lead duo fought side by side for the lead with Rocco taking the lead on lap-29 with a pass in turn 2. Pennink also got around Gervais to move into second while McDermott was now side by side with Gervais for third on lap-31. A multicar incident in turn 1 involved Tom Bolles, Ronnie Williams, Izzo, Avery, Ted Christopher, Brendon Bock, Abele, and Tommy Membrino, Jr. brought the caution out with 31 laps complete.

Rocco took the lead back under green with Pennink moving into second. McDermott was third with Dowling fourth and Gervais fifth. Pennink took to the outside groove and took the lead from Rocco on lap-34. Carlos Gray spun in turn 4 to bring the caution out with 36 laps complete.

Pennink and Rocco ran side by side for the lead with Rocco leading the lap by a nose at the line. One lap later saw Pennink power his way back into the lead with Dowling moving to the inside of Rocco and taking second. Preece was up to fourth behind Rocco with McDermott still running in fifth. Dowling took a look to the inside of Pennink in turn 3 on lap-41 but Pennink was able to hold him off.

After applying heavy pressure, Dowling was finally able to make a pass stick for the lead and he took the lead from Pennink on lap-47. Preece was third with Rocco in fourth and Owen in fifth. McDermott was sixth, Mike Christopher, Jr. was seventh and charging his way back towards the front, Glen Reen was eighth, Williams was ninth, and Avery rounded out the top-10 at the halfway point. Tommy Membrino, Jr. spun on the backstretch to bring the caution out with 53 laps complete. Under the caution, McDermott and Ted Christopher came to pit road for adjustment.

Dowling took the lead back under green with Preece taking second from Pennink. Owen and Rocco were side by side for fourth with Mike Christopher, Jr., Williams, Gervais, Avery, and Matt Galko making up the top-10. Carlos Gray spun in the middle of turns 1+2 to bring the caution out with 67 laps complete.

Dowling took the lead on the restart after fending off a challenge from Preece with Owen making a strong move to get up to third behind the lead duo. Pennink was fourth with Rocco in fifth. Williams was in sixth with Mike Christopher, Jr., Ted Christopher, Brendon Bock, and Avery making up the top-10. Dowling began to stretch out his lead over Preece, pulling out to nearly a one second lead with 22 laps to go. Owen and Pennink were locked in a duel for third behind the two lead cars with Rocco, Williams, Mike Christopher, Jr., and Ted Christopher lined up single file behind them.

Pennink was able to finally work his way past Owen to move into third on lap-85 after he had tried to make the move for the past several laps. Dowling pulled away from Preece in the closing laps to score his biggest paying victory of his Stafford career. Pennink finished third with Owen and Rocco rounding out the top-5. 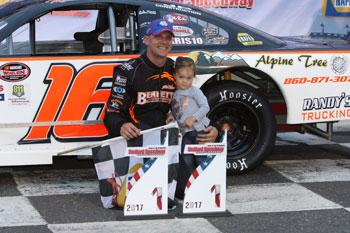 In the 30-lap Late Model feature event, Michael Bennett looked like he was shot out of a cannon at the start of the race as he took to the outside lane and went from 4th to the lead in the first corner. Glen Reen quickly moved into second with Tom Fearn slicing his way through traffic to take third. Tyler Leary was fourth with Michael Wray in fifth.

Paul Arute moved around Matt Vassar to take sixth on lap-5 as Bennett continued to lead the race with Reen giving chase. The top-5 ran unchanged to the checkered flag in a green to checkered feature event with Bennett picking up his second win of the 2017 season. Reen finished second with Fearn, Leary, and Wray rounding out the top-5. 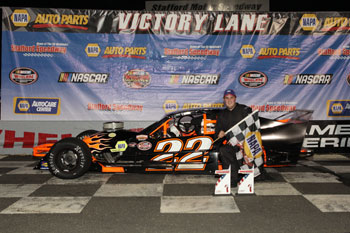 In the 20-lap SK Light feature event, Wesley Prucker took the early lead with Geoff Nooney, Chris Viens, Chris Matthews, and Glenn Korner giving chase. The caution came out with 2 laps complete for a spin in turn 4 by Rit Dulac.

Back under green, Prucker and Nooney took the first two spots with Chris Matthews moving up to third. Keith Caruso moved into fourth and Marcello Rufrano took fifth as Korner’s car was having trouble getting up to speed on the restart. He slid back to 10th in line and up front, Nooney went around Prucker to take the lead on lap-5.

Prucker was hounding Nooney for the lead but Nooney was able to fend off his challenges. Rufrano got into the backstretch wall to bring the caution back out with 9 laps complete.

Prucker took the lead back under green with Nooney, George Nocera, Jr., Brett Gonyaw, and Chris Matthews lined up behind him. The caution came back out with 11 laps complete for Glenn Griswold, who hit the turn 3 wall.

Prucker took the lead on the restart with Gonyaw pulling alongside Nooney for second. Gonyaw got clear into second on lap-13 and he was making a move for the lead in turn 1 on lap-14. Gonyaw completed his pass in turn 3 and his pass allowed Cory DiMatteo to follow him past Prucker and move into second. Nocera and DiMatteo touched tires in turn 2 and Nocera spun and collected Matthews and Caruso to bring the caution out with 15 laps complete.

The field completed one lap before the caution came back out for spins in turn 1 by Bob Charland, Andrew Les, and Cassandra Cole.

Gonyaw took the lead on the restart but DiMatteo was applying heavy pressure to his back bumper. The two cars made contact going into turn 3 with Gonyaw spinning around and DiMatteo shot directly into the wall to bring the caution out and set up a green white checkered finish. The wreck put Prucker back on point with Nooney alongside and Rufrano and David Arute in the second row for the restart.

Prucker took the lead with Rufrano moving around Nooney to take second. Prucker held off Rufrano on the final lap to pick up his first career SK Light feature victory. Nooney finished third with Arute and Nocera rounding out the top-5. 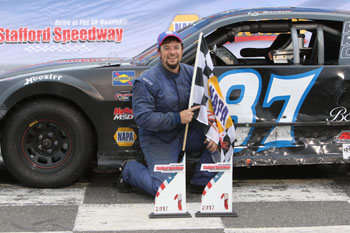 In the 20-lap Limited Late Model feature, R.J. Surdell took the lead at the green with Matt Clement slotting into second. Tyler Trott quickly moved into third with Bryan Narducci and Alexandra Fearn side by side for fourth. Narducci moved into second on lap-3 by going past Trott and he brought Al Saunders and Duane Provost with him as Trott fell back to fifth in the running order with Jeremy Lavoie right on his bumper.

With 8 laps complete, it was still Surdell in the lead followed by Narducci, Al Saunders, Provost, and Lavoie. Cliff Saunders was sixth with Trott back to seventh in line. Narducci had run Surdell down and was beginning to apply some pressure for the race lead as they hit the halfway point. Provost had closed the gap to Narducci in second so it was now a three-car train for the lead.

Just as Provost and Narducci had closed in on Surdell for the lead, Surdell found another gear and began to slowly but surely extend his advantage. Surdell was able to hold off Provost and Narducci to the checkered flag to pick up his very first career Ltd. Late Model feature victory. Narducci finished second, with Provost, Lavoie, and Saunders rounding out the top-5. 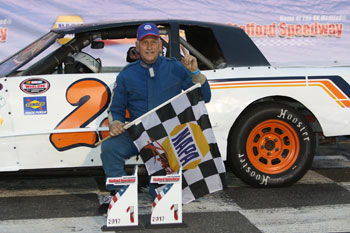 In the 15-lap DARE Stock feature, Chuck Harrison took the early lead with Chris Sanford, Vince Gambacorta, Trace Beyer, and George Bessette, Jr. lined up behind him. With 1 lap complete, Nicole Chambrello spun in the middle of turns 1+2 to bring the caution out.

Harrison took the lead on the restart but he was quickly overtaken by Vince Gambacorta. Behind Gambacorta, Zack Robinson and Johnny Walker were slicing their way through traffic and moved into the top-5. Robinson moved into second while Walker settled into fourth behind George Bessette, Jr. with Beyer running in fifth. Walker moved around Bessette for third on lap-9 as everyone was still chasing after Gambacorta in the lead.

Gambacorta was able to maintain the lead to the checkered flag to pick up his first DARE Stock feature win since the NAPA Fall Final in 2006. Robinson finished second with Walker, Bessette, and Beyer rounding out the top-5.