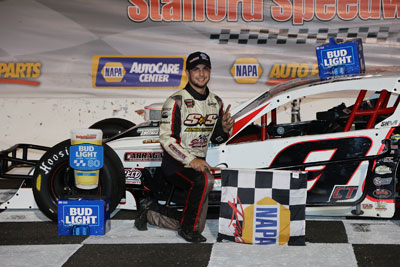 (Stafford Springs, CT)—Open Modified cars returned to Stafford Motor Speedway for the third of four visits during the 2021 season on Friday, July 30th for the Bud Light Open 80.  Chase Dowling took the lead from Ryan Preece on lap-56 and drove away from the field to win the Bud Light 80 and take home contingency bonuses of $1,000 from GAF Roofing, $500 from New England Racing Fuel, and $500 from Rayner Real Estate to push his winner’s check up to $5,500.

Ryan Preece led the field to the green flag and he took the early lead with Ronnie Williams, Chase Dowling, Matt Galko, and Joey Cipriano behind him.  Williams nearly made a move for the lead on lap-4, but he fell back into line in second place behind Preece.  The caution came out with 10 laps complete for Les Rose, Jr. and Robert Bloxsom, III, who both got into the turn 3 wall.

With 30 laps complete, the top-3 of Preece, Williams, and Dowling remained unchanged but Pitkat was now up to fourth with Cipriano in fifth.  Galko was sixth followed by Eric Goodale, Craig Lutz, Chris Pasteryak, and Dana DiMatteo.  The caution came back out with 38 laps complete for a spin in turn 2 by Bloxsom.

Under the caution every car except for Andrew Molleur decided to come to pit road for a change of 2 tires and adjustments.  Preece won the race off of pit road followed by Dowling, Williams, Cipriano, Goodale, Pitkat, Lutz, Anthony Nocella, and Pasteryak.

Molleur led the first lap after the restart but Preece charged his way into the lead on lap-40.  Dowling quickly worked his way up to second and Williams took third, dropping Molleur from the lead back to fourth place.  Cipriano took fourth from Molleur on lap-42 and Pitkat followed him through into fifth as Molleur began to slide backwards.  Pitkat then took fourth from Cipriano on lap-45 while Dowling was starting to apply heavy pressure to the back bumper of Preece for the race lead.  Bloxsom brought the caution back out with 50 laps complete with a spin coming out of turn 2.

Dowling went wheel to wheel on the outside of Preece for 2 laps after the restart before getting clear into the lead on lap-53.  Pitkat was up to third with Williams fourth and Cipriano in fifth.  Pasteryak was sixth followed by Nocella, DiMatteo, Owen, and Galko.  Brett Gonyaw spun in turn 4 to bring the caution back out with 57 laps complete.

Dowling took the lead on the restart with Pitkat getting around Preece to move into second.  Williams was fourth in line with Cipriano right behind him in fifth.  Pasteryak was sixth with Nocella and DiMatteo side by side for seventh, Galko was ninth and Noah Korner was up to tenth.

Dowilng cruised to his second consecutive Open Modified victory at Stafford with Pitkat coming home in second.  Williams finished third with Cipriano and Pasteryak rounding out the top-5.