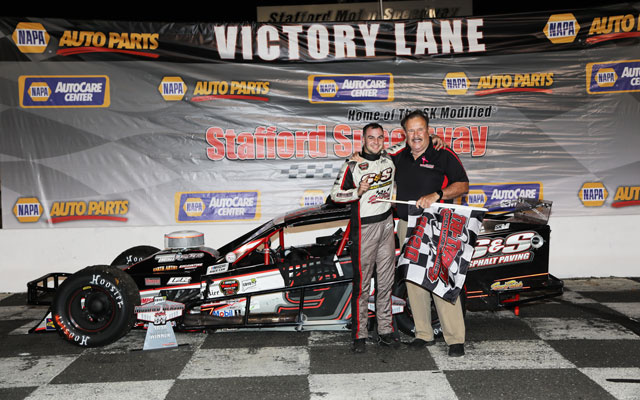 (Stafford Springs, CT)—Stafford Motor Speedway welcomed the Tri-Track Open Modified Series to the track for their first visit to Stafford for the $10,000 to win Call Before You Dig 81.  With 51 cars on hand to qualify for 32 starting positions, there was also a 25-lap B-Main feature that sent the top-2 finishers to the main event and paid a purse of nearly $10,000 to the non-qualifiers.  Chase Dowling held off Matt Hirschman through a host of mid-race restarts before pulling away from the field in the closing laps to win the race and the $10,000 payday.  Noah Korner won the B-Main and Dylan Izzo finished second to advance into the CBYD 81 main feature.

The Call Before You Dig 81 took the green flag with Ronnie Williams going outside Burt Myers to take the early lead.  Ryan Preece went from fourth to second on the start with Chase Dowling taking third.  Myers slotted into line in fourth, just in front of Woody Pitkat.  Pitkat got around Myers to take fourth place on lap-4 and Keith Rocco took fifth on lap-5 as Myers was sliding backwards to ninth place.  Dowling took the lead from Williams on lap-12 just before the caution came out for Marcello Rufrano who spun into the frontstretch grass.

Dowling took the lead back under green with Williams, Pitkat, Preece, and Tommy Barrett, Jr. lined up behind him.  Matt Hirschman was up to sixth place and he took fifth from Barrett on lap-15 while up front, Pitkat and Preece both got by Williams to move into second and third.  Preece took second from Pitkat on lap-20 while Dowling was starting to stretch out his advantage up front.

With 25 laps complete, the running order was Dowling, Preece, Pitkat, Hirschman, Williams, Doug Coby, Joey Cipriano, Barrett, Jon McKennedy, and Michael Christopher, Jr.  The caution flew with 30 laps complete for a spin in the middle of turns 3+4 by Noah Korner.  Under the caution period, the majority of cars came to pit road for service.  The cars that stayed out were Preece, Coby, Christopher, Eric Goodale, Dylan Izzo, and Matt Swanson.  The order for the restart was Preece and Coby on the front row, Christopher and Goodale in row 2 and Izzo and Swanson in row 3.  Several cars piled up on the restart in turn 1 involving Marcello Rufrano, Dave Etheridge, Matt Galko, Anthony Sesely, Brian Robie, and Ryan Doucette, while on the backstretch Jon McKennedy and Woody Pitkat came together and collected the car of Sapienza to bring the red and yellow flags out as Pitkat’s car was pinned on its side against the backstretch wall.

Preece took the lead on the restart with Christopher in second.  Izzo was third but on lap-32 Dowling went 3-wide with Izzo and Swanson to move into third and then he took second from Christopher.  Izzo got into the backstretch wall on lap-37 and he limped back to pit road but his car came to a stop just at the entrance to pit road to bring the caution out.

Swanson spun on the restart coming out of turn 2 to bring the caution flag right back out.  Goodale spun on the frontstretch to bring the caution out again before a lap could be completed on the next restart.  The third restart saw Dowling power his way around Preece in the outside lane to take the lead.  Hirschman followed suit and moved into second with Joey Cipriano taking third, Ronnie Silk fourth, and Christopher fifth.  Preece slid back to sixth place but he would lose that place to Williams on lap-41.  Rufrano spun in turn 3 with 45 laps complete to bring the caution out.

Dowling took the lead on the restart with Hirschman in second.  Cipriano was third followed by Silk and Williams but the caution came back out with 46 laps complete as Preece and Coby both got into the turn 3 wall and were done for the night.  Dana DiMatteo was black flagged and parked for the remainder of the race by Tri-Track officials for making contact with Preece and Coby.

Hirschman and Dowling went side by side for the lead for 2 laps after the restart with Dowling getting clear to the lead on lap-49.  Cipriano was third in line followed by Silk, Williams, Korner, Owen, Goodale, Rufrano, and Pasteryak.  The caution came back out with 52 laps complete for a spin by Pasteryak in turn 4 that also involved Rufrano.

Dowling took the lead back under green with Hirschman right behind him in second.  Cipriano and Silk were side by side for third place with Williams and Owen side by side for fifth.  Noah Korner spun on the backstetch to bring the caution back out with 56 laps complete.

Dowling again took the lead on the restart with Hirschman slotting into second.  Williams and Cipriano were side by side for third place with Goodale in fifth.  Cipriano got clear of Williams for third on lap-58 before the caution came back out with 59 laps complete for spins in turn 3 by Andy Jankowiak and Christopher.

Dowling shot back into the lead on the restart with Williams pulling alongside Hirschman for second.  Justin Bonsignore was up to fourth and Swanson and Goodale were side by side for fifth place.  Williams was able to clear Hirschman for second on lap-63 while Goodale’s car dropped off the pace and he pulled behind the pit wall.  This made the running order Dowling, Williams, Hirschman, Bonsignore, and Swanson with 18 laps to go.

With 5 laps to go it was still Dowling in command with Williams, Hirschman, Bonsignore, and Swanson giving chase.  Hirschman and Williams were fighting hard for second place, which was allowing Dowling to slowly build up a lead lap by lap as the field closed in on the checkered flag.

Dowling led the field to the checkered flag to win the race and the $10,000 payday that came with the victory.  Williams finished second with Hirschman, Bonsignore, and Swanson rounding out the top-5.

Call Before You Dig 81 Feature Results

The 25-lap B-Main feature took the green with Noah Korner setting the early pace followed by Blake Barney, Joey Mucciacciaro, Max Zachem, and Tommy Membrino, Jr.  Membrino spun in turn 3 and collected the cars of Brett Gonyaw and Paul Kusheba to bring the caution out with 3 laps complete.

Barney nearly took the lead from Korner on the restart but Korner was able to maintain the lead.  TJ Bleau spun in the middle of turns 3+4and collected the cars of Walt Sutcliffe, Jr. and Anthony Flannery to bring the caution back out with 5 laps complete.

The field completed one lap before the caution came back out for Membrino, who got into the turn 3 wall.  Korner again took the lead on the restart with Barney right on his back bumper in second.  Zachem was third in line followed by Mucciacciaro and Dylan Izzo.  Calvin Carroll brought the caution back out with 14 laps complete with a spin in the middle of turns 1+2.

Korner took the lead on the restart while George Sherman spun in turn 3 but was able to get going and the race stayed green.  Izzo got around Zachem to take over second place on lap-17 with Barney third in line.  Mucciacciaro and Zachem were side by side for fourth place but Mucciacciaro got loose in turn 4 and fell back to 13th place before pulling his car on to pit road.

Korner took the checkered flag to win the B-Main and advance to the Call Before You Dig 81.  Dylan Izzo finished second and earned the second transfer spot.  Barney finished third with Zachem and Gonyaw rounding out the top-5.