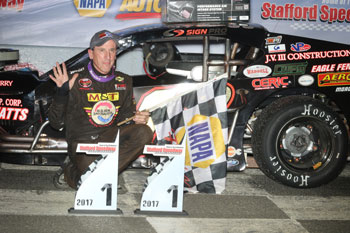 In the 40-lap SK Modified® feature, Glen Reen took the early lead from the pole with Ronnie Williams second, Keith Rocco third, Josh Wood fourth, and Dan Avery fifth. Avery got around Wood to take fourth on lap-3 with Michael Gervais, Jr. taking fifth as Wood was slowly fading back outside the top-10.

Williams went to the lead on lap-5 with Rocco moving up to second as Reen fell back to third in line. Avery was fourth and Matt Galko got around Gervais to take over fifth.

Avery got out of shape on lap-12 and he fell back to the rear of the field as Williams was still out front. Rocco took the lead from Williams on lap-13 and the caution came out with 14 laps complete as Reen spun coming out of turn 4.

Rocco took the lead back under green with Christopher moving into second. The caution came back out with 16 laps complete for a spin in turns 3+4 by Matt Galko.

Rocco and Christopher resumed their duel for the lead on the restart but it only lasted one lap before the caution came back out for a spin in turn 2 by Tom Bolles.

On the restart, Cam McDermott touched wheels with another car which sent him up and over the car in front of him and several cars got into the turn 3 wall to bring the caution back out before a lap could be completed.

Rocco took the lead with Christopher right on his bumper. Christopher made a move to Rocco’s inside in turns 3+4 on lap-18 to move into the lead. Todd Owen was up to third and he pulled alongside Rocco for second on lap-19. Owen got clear on lap-21 and Tony Membrino, Jr. was now fourth with Williams in fifth. Gervais spun coming out of turn 4 and Reen came to a stop on the frontstretch infield after taking an off track excursion to bring the caution out with 23 laps complete.

Christopher took the lead on the restart with Owen right on his back bumper. Rocco was third with Membrino in fourth and Williams in fifth. Owen was all over Christopher’s back bumper and he nearly made a pass coming out of turn 4 on lap-28 but he had to back out of his move which gave Rocco all the room he needed to take second from Owen.

With 10 laps to go, Christopher led Rocco, Owen, Membrino, Williams, Galko, Rowan Pennink, and Chase Dowling. Owen went around Rocco to take over second on lap-33 and then Rocco’s car dropped off the pace and he limped back to pit road.

Christopher and Owen now had a comfortable margin back to Williams in third, who now had Dowling in fourth and Pennink in fifth behind him. Christopher led Owen to the checkered flag to pick up his fifth win of the 2017 season and second consecutive. Williams finished third with Dowling and Pennink rounding out the top-5. 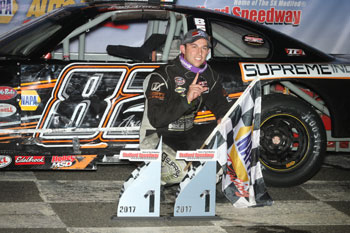 In the 30-lap Late Model feature, Paul Arute took the lead at the drop of the green with Tom Fearn moving into second. Josh Wood got around Rich Hammann for third on lap-3 and he brought Kevin Gambacorta with him and Glen Reen took over fifth as Hammann slid back to tenth in the running order.

Fearn was hounding Arute for the lead but Arute was able to fend off his challenges for the time being. Behind the leaders, Reen got out of shape in turn 4 and fell from fifth back to seventh. Reen took sixth back from Tyler Leary on lap-10 and the caution came out with 10 laps complete as Mike Mordino spun in turn 2. Under the caution Reen brought his car to pit road where his crew made an adjustment as did Josh Wood.

Arute took the lead back under green while Gambacorta pulled alongside Fearn for second and he took second at the line. Leary was now side by side with Fearn for third place with Michael Bennett and Wayne Coury, Jr. side by side for fifth. Leary took third with Fearn slotting into fourth and Bennett took fifth.

Bennett made a move to the inside of Fearn on lap-14 to move up to fourth but he got loose in turn 1 with several cars and he slid back to eighth place behind Fearn as Michael Wray took fourth, Reen fifth, and Coury sixth with Arute still leading Gambacorta and Leary.

Leary made a move to the inside of Gambacorta on lap-23 to move into second as Arute was still in command of the race. Wray got by Gambacorta on lap-25 to move into third with Reen in fifth. Arute led Leary to the checkered flag to pick up his first career Late Model feature win. Fearn spun in turn 4 on the final lap to drop back to 10th in the finish with Wray, Gambacorta, and Reen rounding out the top-5. 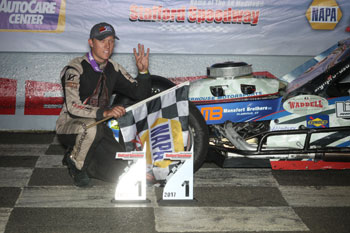 In the 20-lap SK Light feature, Andrew Les took the lead from the pole with Glenn Korner behind him in second. Bob Charland took third with George Nocera, Jr. pulling alongside David Arute for fourth. Arute was able to hold Nocera off and Nocera was now side by side with Brett Gonyaw for fifth.

Gonyaw got a good run in the outside lane and he took fourth from Arute on lap-7 as Les was still leading Korner and Charland. Korner made a move to the inside of Les on lap-9 but couldn’t complete the pass and they ran side by side. Korner finally slotted back into second behind Les on lap-12 with Gonyaw now in third. Cory DiMatteo was up to fourth and Charland was fifth. Korner spun into the turn 4 wall to bring the caution out with 13 laps complete.

Back under green DiMatteo made a move through the middle of Les and Gonyaw and took the lead in turns 1+2. The caution came out with 14 laps complete for Mikey Flynn, who came to a stop on the old L & R turn on the backstretch.

Gonyaw and DiMatteo went side by side for the lead back under green with Les third, Nocera fourth, and Marcello Rufrano in fifth. With one lap to go, the two lead cars were still side by side but the caution came out for Glenn Griswold, who spun in turn 4 to set up a green white checkered finish.

DiMatteo and Gonyaw went back side by side on the restart and coming through turns 3+4 Rufrano made a move for the lead. Rufrano got into second and he and DiMatteo ran side by side for the final lap. They were still side by side coming out of turn 4 and as they came to the line, DiMatteo beat Rufrano by the nose of his car to take down his fourth win of the 2017 season. Gonyaw finished third with Nocera and Arute rounding out the top-5. 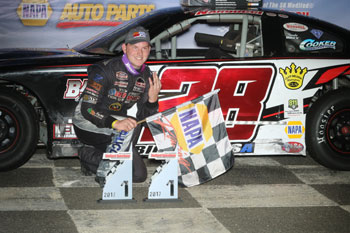 In the 20-lap Limited Late Model feature, Tyler Trott took the lead at the green but Cliff Saunders streaked past him and into the lead with a power move in turn 3. Trott was side by side with Alexandra Fearn for second with Bryan Narducci and Jeremy Lavoie behind them. Fearn took second with Narducci moving up to third and Lavoie to fourth on lap-3 as Trot slid back to fifth. Trott would lose fifth to Ryan Fearn on lap-5 and he continued to slide backwards as a train of cars went by him on his inside. R.J. Surdell and Gary Patnode spun in turn 4 to bring the caution out with 6 laps complete.

The restart was scintillating as Narducci made a bold three-wide move in turn 3 to get by both Cliff Saunders and Alexandra Fearn to take over the lead. Saunders and Fearn were side by side for second with Ryan Fearn in fourth and Duane Provost was up to fifth.

Narducci led Saunders to the checkered flag to pick up his second consecutive win of the 2017 season. Alexandra Fearn finished third with Ryan Fearn and Provost rounding out the top-5. 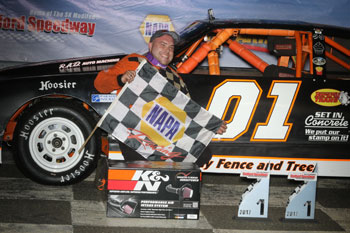 In the 15-lap DARE Stock feature, Jake Higginson spun in turn 3 and got hit by Paul Bourdon, Jr. to bring the caution out before the first lap could be completed.

Chuck Harrison took the lead on the restart with Nicole Chambrello and George Bessette, Jr. side by side for second. Johnny Walker was fourth with Travis Hydar holding off Mike Hopkins for fifth. On lap-4 Walker worked his way to the inside of Chambrello and he took over second on lap-5 with Chambrello falling back to third. Bessette was fourth with Hydar still holding off Hopkins for fifth. Walker completed his charge to the front by taking the lead from Harrison on lap-7 with a pass in turns 3+4.

The top-7 cars were now lined up in a train of cars with Walker leading Harrison, Chambrello, Bessette, Hydar, Hopkins, Dave Secore, and Vince Gambacorta. Chambrello and Bessette were side by side for third when Chambrello spun in turn 2 to bring the caution out with 10 laps complete.

Harrison got into the wall on the restart but the race stayed green with Walker taking the lead with Bessette, Secore, Gambacorta, and Greg DeMone lined up behind him. Chambrello and Hydar had a quick spin in turn 2 on lap-13 but they were both able to get going and the race stayed under green flag conditions. Walker led Bessette to the checkered flag to pick up his fifth win of the 2017 season. Secore finished third with Gambacorta and DeMone rounding out the top-5. 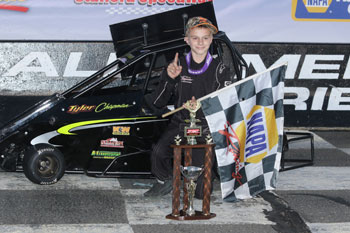 In the 20-lap Wild Thing Karts Junior Outlaws feature, Tyler Palmer took the lead but he was overtaken on lap-2 by Cameron Pearl. Palmer came back to take second on lap-3 but he lost that spot to Tyler Chapman on lap-4 as Cha[pman was charging his way towards the front after starting sixth. Palmer was third with Jake Hines fourth and Kevin Cormier fifth.

Chapman was right on Pearl’s back bumper when the caution came out with 9 laps complete for Jason Chapman and Nathan Wenzel, who came together and got into the turn 4 wall.

Chapman got a good run to the outside of Pearl in turn 1 on the restart to grab the lead. Pearl slotted into second with Cormier charging up to third. Hines was fourth with Palmer in fifth. Chapman led Pearl to the checkered flag to pick up his 8th Jr. Outlaws feature win of the 2017 season. Cormier finished third with Hines and Palmer rounding out the top-5.