(Stafford Springs, CT)—Stafford Speedway returned to NASCAR Whelen All-American Series racing action on Friday, July 21st with the Exit Realty Modified Touring Series making their second visit of the 2017 season to Stafford for the Lincoln Tech 100 with Stafford’s five NASCAR Whelen All-American Series divisions joining them in feature action. Taking down weekly feature wins on the night were Ted Christopher, who drove with a broken right hand, in the SK Modified® division, Tom Fearn in the Late Model division, David Arute in the SK Light division, Ryan Fearn in the Limited Late Model division, and Zack Robinson in the DARE Stock feature. 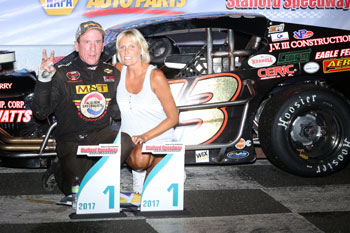 In the 40-lap SK Modified® feature event, Michael Gervais, Jr. took the lead at the green with Dan Avery in second. Glen Reen was third with Cam McDermott and Stephen Kopcik side by side for fourth place. Reen nearly got sideways on lap-6 but he gathered his car up and nearly made a 3-wide move for third. He settled back into line in fifth behind McDermott and Kopcik as Gervais and Avery continued to set the pace out front. Rowan Pennink took a hard hit into the turn 3 wall to bring the caution and red flags out with 8 laps complete.

Gervais took the lead back under green with McDermott moving into second. Avery settled into third after a duel with Mike Christopher, Jr. with Kopcik in fifth. McDermott was applying heavy pressure to Gervais for the lead and nearly made a pass in turn 4 on lap-13 but Gervais was able to hold him off. Christopher, Jr. was also working Avery over for third and he went to the outside groove to try to make the pass. Gervais and McDermott touched in turns 1+2 with Gervais spinning in turn 2 to bring the caution out. One lap earlier, Chase Dowling’s car dropped off the pace and he limped to pit road. McDermott was black flagged for overaggressive driving, which put Christopher, Jr. out front for the restart.

Christopher led on the restart, but he was quickly overtaken by Todd Owen. Owen’s move opened the door for Keith Rocco and Ted Christopher to also get past Christopher, Jr. to drop him from the lead back to fourth. Avery was running fifth with 22 laps complete. Gervais spun in turn 4 to bring the caution out with 24 laps complete.

Owen took the lead on the restart with Ted Christopher getting around Rocco to move into second. Avery was fourth with Mike Christopher, Jr. on his outside in fifth. Christopher took the lead from Owen on lap-28 and then the caution came out for spin in turn 1 by Reen.

Owen ran side by side with Christopher for a lap before he settled back into second. Rocco was third with Mike Christopher, Jr. fourth and Josh Wood and Avery were side by side for fifth place. Owen was looking high and low for a way to get back around Christopher for the lead, but Christopher was able to fend off his challenges. Wood and Brendon Bock touched and spun in turn 2 to bring the caution back out with 33 laps complete.

Christopher took the lead on the restart with Owen immediately slotting into second behind him. Rocco was third with Avery and Christopher, Jr. side by side for fourth place. Owen again was looking high and low on Christopher for the lead but John Catania and Tommy Membrino, Jr. got into the turn 3 wall to bring the caution back out with 35 laps complete. 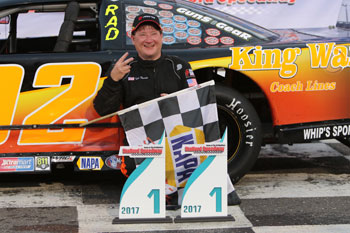 In the 30-lap Late Model feature event, Matt Vassar took the early lead with Rich Hammann right behind him in second. Hammann would lose second to Josh Wood on lap-4 and Wood made a move on lap-5 in turns 1+2 to take the lead from Vassar. Kevin Gambacorta was running in fourth and Tom Fearn was fifth. Paul Arute got into the turn 4 wall to bring the caution out with 5 laps complete. Under the caution, Michael Wray came to pit road for an adjustment and Michael Bennett was sent to the rear of the field for overaggressive driving.

Wood took the lead back under green with Gambacorta moving into second. Fearn took third with Glen Reen charging into fourth and Mike Mordino was in fifth. Fearn took second from Gambacorta on lap-8 and he took over the lead on lap-11. Reen got around Wood for second on lap-14 and Gambacorta made a move to take over third from Wood on lap-16.

Fearn and Reen were slowly pulling away from Gambacorta in third with Wood in fourth and Mordino still in fifth with 20 laps complete. Bennett was charging his way back through the field after his earlier penalty and he took sixth from Tyler Leary on lap-21. Bennett was all over Mordino for fifth and he was finally able to make a pass on lap-27 to move into fifth. He took fourth from Wood on lap-28 as Gambacorta was closing in on Fearn and Reen at the front of the pack.

Fearn was able to hold off Reen to the checkered flag to pick up his second win of the 2017 season. Gambacorta finished third with Bennett and Leary rounding out the top-5. 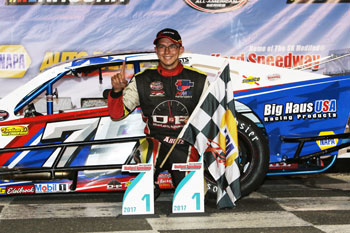 In the 20-lap SK Light feature event, Keith Caruso took the lead at the green. David Arute was in the process of taking the lead on lap-3, but before the lap could be completed the caution came out for a spin in turn 4 by Bob Charland.

Caruso took the lead on the restart but he lost the lead to Arute on lap-4 as Arute made a pass in turn 4. Glenn Korner was third behind Arute and Caruso with Geoff Nooney in fourth and Cory DiMatteo in fifth.   Glenn Griswold hit the wall coming out of turn 4 to bring the caution out with 5 laps complete.

Arute took the lead back under green with Korner in second. DiMatteo was third with Caruso and Joey Ferrigno making up the top-5. Korner briefly moved to the front on lap-8 but Arute came back strong in the outside groove and went back to the point. DiMatteo had closed the gap to the two leader and it was now a 3-car train for the lead. Wesley Prucker came to a stop backwards on the frontstretch to bring the caution out with 13 laps complete.

Arute took the lead back under green with DiMatteo getting around Korner to move into second. Caruso was side by side with Ferrigno for fourth. Ferrigno took fourth on lap-15 and he brought Daniel Wesson with him in the outside lane into fifth as Caruso slid back several spots. Chris Viens and Geoff Nooney came together and got into the turn 4 wall to bring the caution and red flags out with 15 laps complete.

On the restart, the start was called back before the cars of Wesson and Korner got hooked together and Wesson went up and over Korner’s right rear tire. Arute took the lead with DiMatteo right behind him in second. DiMatteo was looking to make a pass, but Arute was able to hold him off to the checkered flag to pick up his first win of the 2017 season. Wesson finished third with Brett Gonyaw and Marcello Rufrano rounding out the top-5. 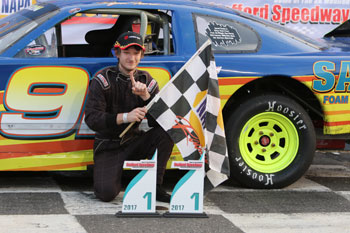 In the 20-lap Limited Late Model feature event, David Tefft took the lead at the green with Tyler Trott in second. Ryan Fearn was third with Cliff Saunders and Bryan Narducci in fifth. William Galinski spun in turn 2 to bring the caution out with 3 laps complete.

Fearn and Trott moved to the front on the restart and one lap after the restart, Trott got sideways in turns 3+4 but he managed to control his sideways slide and he rejoined in third as Cliff Saunders moved into second. Trott got out of shape coming out of turn 4 on lap-6 and he spun on the frontstretch to bring the caution out. Just as the caution came out, R.J. Surdell came to a stop in turn 3 with a trail of fluid behind his car that brought the red flag out.

Fearn took the lead back under green with Narducci getting by Cliff Saunders on lap-8 to take over second. Al Saunders was fourth behind his twin brother and Jeremy Lavoie was fifth with Duane Provost in sixth. Fearn was beginning to stretch out his lead over Narducci while Narducci all the way back to Trott in seventh were locked in a nose to tail train.

Cliff Saunders made a move for second on lap-13 to the inside of Narducci and he was able to take the spot by a nose at the line. Al Saunders made the same move on lap-14 to move into third and drop Lavoie back to fourth place. Fearn cruised to the checkered flag to pick up his first Limited Late Model feature win. Cliff and Al Saunders came home in second and third with Lavoie and Provost rounding out the top-5. 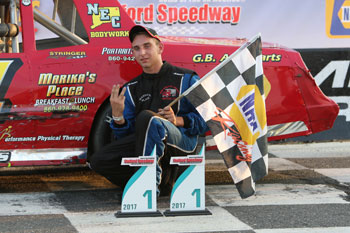 In the 15-lap DARE Stock feature event, the field took the green with Nicole Chambrello and Chris Sanford spinning, which collected Brandon Michael and Paul Bourdon, Jr. had to take evasive action through the grass to bring the caution out before a lap could be completed.

George Bessette, Jr. took the lead on the restart with Chris Bagnall in second. Vince Gambacorta and Trace Beyer were having a spirited battle for third with Johnny Walker in fifth and Zack Robinson in sixth. Beyer took third from Gambacorta on lap-4 and his move opened the door for Walker and Robinson to follow him through and drop Gambacorta back to sixth as Bessette and Bagnall continued to set the pace out front. Chambrello spun in turn 2 to bring the caution back out with 7 laps complete.

Robinson held off Walker to the checkered flag to pick up his third win of the 2017 season. Bessette finished third with Beyer and Bagnall rounding out the top-5.