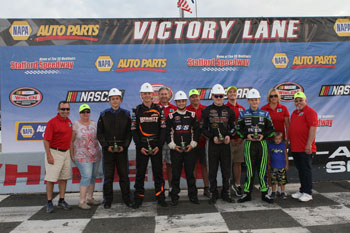 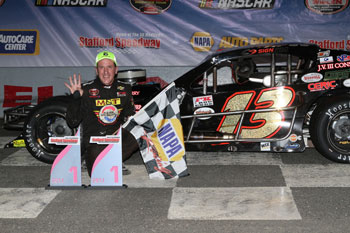 In the 40-lap SK Modified® feature event, the action at the front was fast and furious as Tom Abele, Jr. went by polesitter Glen Reen to lead the first lap before giving way to Rowan Pennink, who took the lead on lap-2. Mike Christopher, Jr. was second behind Pennink with Ted Christopher quickly moving up to third. Tommy Membrino, Jr. spun in the middle of turns 3+4 brought the caution out with 5 laps complete.

The restart saw Rocco, Stephen Kopcik, and John Catania spin on the backstretch to bring the caution right back out before a lap couple be completed. Rocco’s car was double hooked off the track and he was finished for the night.

Ted Christopher took the lead back under green with Pennink all over his back bumper. Christopher was able to get clear on lap-15 and Todd Owen was now on the outside of Pennink in a challenge for second. Pennink won that battle and Owen was now side by side with Christopher, Jr. for third with Matt Galko and Chase Dowling side by side for fifth. At the halfway point, Ted Christopher still had Pennink glued to his back bumper with Christopher, Jr., Owen, and Dowling lined up in third to fifth. Tommy Membrino came to a stop on the backstretch to bring the caution out with 25 laps complete.

Christopher was able to hold off Pennink to the checkered flag to pick up his fourth win of the 2017 season. Pennink got loose in the last corner and nearly lost second to Dowling, but he was abel to beat Dowling to the line by inches. Christopher, Jr. finished fourth with Hines rounding out the top-5. 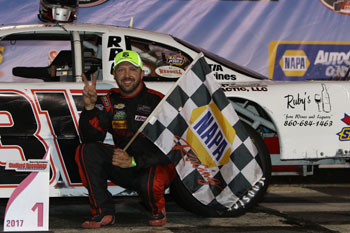 In the 30-lap Late Model feature event, Paul Arute took the lead at the green with Josh Wood going side by side with Rich Hammann for second. Wood got clear on lap-2 and Glen Reen took third with Tom Fearn taking fourth on lap-3 as Hammann was sliding backwards. Tyler Leary took fifth from Hammann on lap-4 and Hammann was able to get back in line in sixth, just in front of Kevin Gambacorta.

Reen got around Wood to move into second on lap-5 and he brought Fearn with him as Wood fell back to fourth. Michael Bennett abruptly pulled off the track and went to pit road under green on lap-7 with his team going under the hood. Bennett rejoined the race three laps down. Arute was still in command of the race with Reen and Fearn bearing down on his back bumper with 9 laps complete.

At the halfway point of the race Arute was still out front with Reen and Fearn behind him. Leary was fourth and Wood was fifth with Gambacorta sixth. Reen took the lead from Arute on lap-18 and Fearn followed him by as Arute slotted into third.

Once he took the lead, Reen opened up a comfortable lead over Fearn and he cruised to his second win of the 2017 season. Fearn finished second with Leary, Arute, and Wood rounding out the top-5. 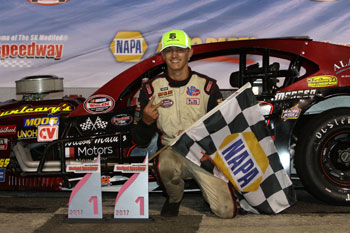 In the 20-lap SK Light feature event, several cars got out of shape on the backstretch exiting turn 2 on the very first lap to bring the caution out. Glenn Korner took the lead on the start with Bob Charland holding off Todd Douillard for second. Cassandra Cole spun coming out of turn 2 and Charland ended up against the wall in turn 3 to bring the caution out with 2 laps complete.

Korner took the lead back under green with Douillard in second. Marcello Rufrano was third with Brett Gonyaw fourth and David Arute in fifth. Rufrano charged into third, then second, and he took the lead from Korner on lap-6. Douillard and Gonyaw were now side by side for third behind Rufrano and Korner with Dan Wesson and Arute side by side for fifth. Things then settled down as Rufrano, Korner, Gonyaw, Wesson, and Cory DiMatteo were in a single file line at the halfway point with Arute and Douillard side by side for sixth. Wesson went around in the middle of turns 1+2 to bring the caution out with 13 laps complete.

Rufrano took the lead on the restart with Gonyaw taking second. Arute and Korner were side by side for third with Douillard in fifth. Arute would get clear of Korner on lap-18 to move into third as Rufrano was still in the lead with Gonyaw in second. Rufrano led Gonyaw and Arute to the checkered flag to pick up his second win of the 2017 season. Korner finished fourth with DiMatteo rounding out the top-5. 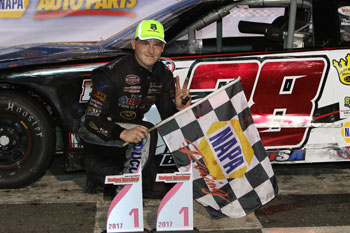 In the 20-lap Limited Late Model feature event, several cars got out of shape at the start with Duane Provost taking a trip through the infield and rejoining at the rear of the field. Tyler Trott had the early lead and he led the first lap before the caution came out for a spin by Gary Patnode.

Trott got loose on the restart, allowing Bryan Narducci to charge into the lead. Trott was second with Alexandra Fearn third, Jeremy Lavoie fourth and Al Saunders fifth. Alexandra Fearn moved into second on lap-4 with Lavoie following her by Trott as did Saunders and Provost as Trott fell back to eighth in the running order. The caution came out with 4 laps complete as Trott and Ryan Fearn came together and got into the turn 4 wall.

Narducci took the lead back under green with Lavoie working his way to the inside of Fearn in a fight for second. Provost and Al Saunders were side by side for fourth with Robert Bloxsom, III in sixth. Lavoie was working his hardest to get by Fearn but Fearn was hanging tough in the outside lane. Lavoie was finally able to complete a pass on lap-8 and the caution came back out with 8 laps complete as Fearn spun in turn 4.

Narducci took the lead again on the restart with Provost taking second. Bloxsom went by Lavoie on lap-9 to move up to third and he brought Saunders with him up to fourth as Lavoie fell back to fifth. Saunders got around Lavoie for fourth and he then took third from Bloxsom on lap-11. Lavoie followed him by Bloxsom to move up to fourth and kick Bloxsom back to fifth in the running order.

Saunders was beginning to turn the fastest laps of the race now that he was third and he took second from Provost on lap-16 and began to set his sights on Narducci, who had a lead of just over 1 second with 4 laps to go. Saunders couldn’t catch Narducci as Narducci picked up his second win of the 2017 season and first win since the season opening NAPA Spring Sizzler feature event. Provost finished third with Lavoie and Bloxsom rounding out the top-5. 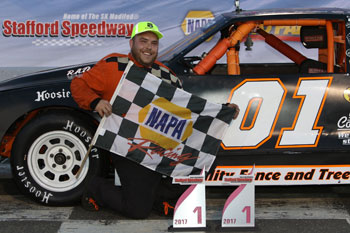 In the 15-lap DARE Stock feature event, Chris Bagnall took the lead at the green with Mike Hopkins taking second. George Bessette, Jr. was side by side with Chuck Harrison for third with Johnny Walker in fifth. Walker took fourth on lap-3 with Travis Hydar following him by Harrison to take over fifth.

Hopkins was applying heavy pressure to the back bumper of Bagnall for the lead but Bagnall was able to fend off his challenges. Bessette worked his way to the inside of Hopkins on lap-7 and as they raced through turns 3+4, Hopkins spun and Bessette nearly spun to bring the caution out. Bessette was sent to the rear of the field for making contact with Hopkins.

Back under green Walker was able to keep pace with Bagnall in the outside groove and he took the lead by a nose at the line. Walker got clear of Bagnall on lap-9 while behind them Vince Gambacorta made a 3-wide move to take over third. Hydar was now fourth on the outside of Gambacorta while Bagnall was fifth. With 10 laps complete, coming out of turn 4 the cars of Nicole Chambrello, Greg DeMone, and Harrison all spun to bring the caution back out.

Trace Beyer briefly pulled ahead of Walker on the restart and they came back to the line in a dead heat. Walker got clear of Beyer on lap-12 with Gambacorta taking third, Hopkins fourth and Hydar fifth with Bessette back up to sixth in line. Beyer closed in right on Walker’s back bumper as they took the white flag and he nearly made a pass in turns 1+2. Beyer got another good run to the inside of Walker coming through turns 3+4 and as they streaked to the checkered flag Walker beat Beyer to the line by a nose to take down his fourth win of the 2017 season. Hopkins finished third with Hydar and Gambacorta rounding out the top-5. 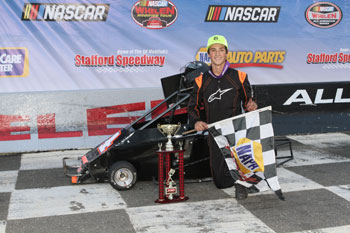 In the 20-lap Wild Thing Karts Senior Outlaws feature event, Christopher Buffone took the lead at the green with Alex Grab moving into second. Wyatt Chambers was third with Josh Gayman up to fourth and Alexander Pearl in fifth.

With 5 laps complete. Buffone and Grab were pulling away from Daniel Gayman in third withi Josho GAyman still in fourth and Chambers was back to fifth in line.

Pearl got around Chambers to move into fifth on lap-12 with Buffone still in the lead with Grab giving chase. The Gayman brothers were still third and fourth with Daniel leading Josh.

Buffone cruised to victory with Grab, Daniel Gayman, Josh Gayman, and Pearl rounding out the top-5.