(Stafford Springs, CT)—Stafford Motor Speedway concluded its 2018 NASCAR racing season with feature events for the SK Modified®, Late Model, and SK Light Modified divisions as part of its NAPA Auto Parts Fall Final Weekend. Taking down feature wins were Michael Christopher, Jr. in the SK Modified® feature, Michael Wray in the Late Model feature, and Alexander Pearl in the SK Light feature. Marcello Rufrano clinched the SK Light Modified track championship after both he and Bryan Narducci wrecked while racing for the lead in the closing laps of the feature event. 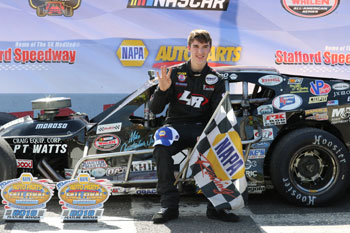 In the 40-lap SK Modified® feature, Matt Galko took the lead on the opening lap with Tyler Hines moving into second and Eric Berndt taking third. Todd Owen moved up to fourth and Keith Rocco was fifth. The caution came out with 1 lap complete for a spin in turn 3 that involved the cars of Ronnie Williams, Dan Avery, and Stephen Kopcik all making contact with the wall.

Galko took the lead on the restart while Berndt, Hines and David Arute were three-wide for second. Berndt and Hines emerged side by side for second with Keith Rocco moving into fourth while Arute slotted into fifth. John Montesanto spun coming out of turn 4 to bring the caution out with 3 laps complete.

Galko took the lead at the drop of the green on the restart but by the time the leaders reached turn 3, Rocco had taken the lead from Galko. Owen was third behind Rocco and Galko with Berndt fourth and Hines in fifth. Owen made a move to the inside of Galko for second on lap-8 and Berndt nearly made it three-wide for second on lap-9 but he backed out of the move. Owen took second from Galko on lap-10 and the caution came back out with 10 laps complete for Michael Gervais, Jr., who made contact with the wall and came to a stop in turn 4.

Rocco took the lead back under green with Owen right behind him in second. Berndt was third with Galko fourth and Michael Christopher, Jr. up to fifth. Christopher took fourth from Galko on lap-15 with a move going into turn 3. Marcello Rufrano was up to sixth with Glen Ren, Nick Salva, Joey Cipriano, and Shawn Thibeault making up the top-10. The caution came out with 17 laps complete for spins in the middle of turns 1+2 involving Kopcik, Tony Membrino, Jr., Arute, Thibeault, Robert Palmer, and Montesanto.

The restart saw Joe Allegro, Jr. get out of shape on the backstretch to bring the caution right back out before a lap could be completed. Owen took the lead by a nose at the line on the next restart and he got clear to the lead on lap-19. Christopher followed in Owen’s tire tracks in the outside lane and he also got by Rocco to move into second and drop Rocco back to third. Rufrano was up to fourth while Berndt and Joey Cipriano were side by side for fifth. The caution came back out with 21 laps complete for Josh Wood, who came to a stop against the wall in turn 2.

Rocco got by Cipriano and moved into second place on lap-30 with Owen fourth behind Cipriano and Berndt was still running fifth as Christopher was still comfortably in the lead. Arute spun coming out of turn 4 on lap-35 but he was able to keep going and the race stayed green.

Christopher led Rocco to the checkered flag to pick up his third consecutive win of the 2018 season and fourth overall. Owen finished third with Cipriano and Berndt rounding out the top-5. Rufrano spun coming out of turn 2 on the final lap and collected the car of Arute. 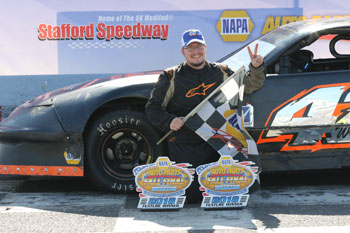 In the 30-lap Late Model feature, the caution came out at the start as Tom Keller got into the wall in the middle of turns 1+2. Tyler Leary took the lead on the restart with Paul Arute and Michael Wray side by side for second. Cliff Saunders hit the wall in turn 1 and several other cars including Willie Kuhn, Paul Varricchio, Jr., Jeff Connors, Tom Butler, and Greg DeMone were collected to bring the caution out with 1 lap complete.

Wray took the lead from Leary on the restart while the car of Tom Fearn dropped off the pace and fell to the rear of the field. Al Saunders took second from Leary and Kevin Gambacorta moved into third as Leary slipped back to fourth with Arute making up the top-5. Arute took fourth from Leary on lap-5 with Wray starting to stretch out his lead over Saunders.

Saunders began to reel Wray in for the lead and by lap-12 he was right behind Wray. Gambacorta was still third with Arute fourth and Leary in fifth. Just behind Leary was Glen Reen and Darrell Keane in sixth and seventh place.

With 10 laps to go, Wray was still leading Saunders with Gambacorta, Arute, and Leary giving chase. Saunders’ car began to show smoke at the rear of the car and he was black flagged, ending his great run. Gambacorta was now second behind Wray with Arute third, Keane fourth, and Reen fifth.

Wray led the field to the checkered flag to pick up his second win of the 2018 season. Gambacorta finished second with Keane, Arute, and Reen rounding out the top-5. 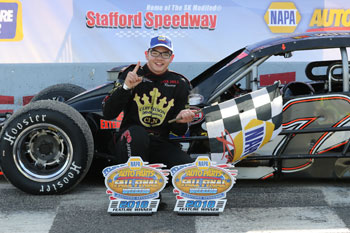 In the 20-lap SK Light Modified feature, Norm Sears and Wesley Prucker and Norm Sears ran the first 2 laps side by side for the lead before Prucker got clear to the lead on lap-3. Glenn Griswold slotted into second with Cassandra Cole working her way up to third. The caution came out with 4 laps complete for a spin in turn 2 by Alina Bryden.

Griswold took the lead on the restart with Prucker and Chris Matthews side by side for second. Marcello Rufrano was fourth in line with Teddy Hodgdon fifth. Joey Ferrigno and Alexander Pearl were side by side for sixth with Bryan Narducci in eighth. Narducci got around both Ferrigno and Pearl to move into sixth on lap-8. George Nocera got upside down and slid down the backstretch and into turn 3 on his roof to bring the yellow and red flags out.

Griswold took the lead on the restart with Prucker and Matthews side by side for second. Just behind them was the race for the SK Light championship with Rufrano and Narducci side by side for fourth. The caution came back out with 10 laps complete as Ed Chicoski and Amanda West came together in the middle of turns 3+4.

Griswold took the lead with Narducci working his way from sixth up to second while Rufrano took third. Narducci took the lead from Griswold on lap-13 and Rufrano followed right behind him to take second and drop Griswold back to third. Bryden brought the caution back out with a spin in turns 3+4 with 13 laps complete. 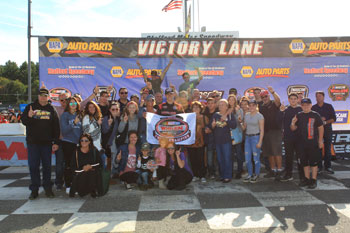 Narducci took the lead back under green with Rufrano right behind him in second. Pearl was third with Griswold fourth and Prucker and Matthews side by side for fifth. Rufrano took a look to the inside of Narducci on lap-15 but he couldn’t make a pass. The caution came back out with 15 laps complete for a multicar spin on the backstretch involving Pete Lopuch, Marc Burke, Kevin Jasper, and Joe Graf, Jr.

Rufrano took the lead from Narducci on the restart but Narducci came back to Rufrano’s inside and they were side by side at the line. Rufrano got into the wall on the backstretch and as he came off the wall he got into Narducci and both cars hit the wall into turn 3 to bring the red and yellow flags out with 16 laps complete.

Pearl took the lead on the restart with Griswold slotting into second. Andrew Molleur was side by side with Prucker for third with Mark Bakaj and Teddy Hodgdon side by side for fifth. Pearl led the field to the checkered flag to pick up his first career win at Stafford. Molleur beat Griswold to the line by a nose for second with Bakaj and Prucker rounding out the top-5.