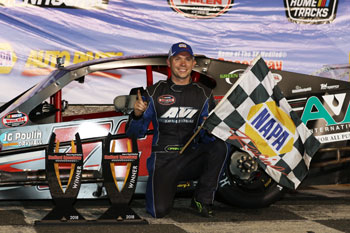 In the 40-lap SK Modified® feature event, Joey Cipriano took the early lead but the caution came out with 2 laps complete for a spin on the backstretch by Matt Galko.

Back under green, Cipriano took the lead with Rowan Pennink moving up to second. Stephen Kopcik was third with Tyler Hines in fourth and Keith Rocco up to fifth. Rocco got by Hines to move into fourth on lap-10 and Michael Christopher, Jr. took fifth from Hines on lap-11.

Christopher was hounding Kopcik for second and he nearly had a pass made in turn 4 on lap-31 but Kopcik was able to fend off his challenge. Christopher made the pass in turns 3+4 stick on lap-32 as he moved into second. Pennink was still fourth with Rocco, Glen Reen, and Ronnie Williams behind him but that order changed on lap-35 as Rocco took fourth, Reen moved to fifth and Williams took sixth to drop Pennink back to seventh in line.

Cipriano led the field to the checkered flag to pick up his first career SK Modified® feature victory at Stafford. Christopher finished second with Kopcik, Reen, and Williams rounding out the top-5. 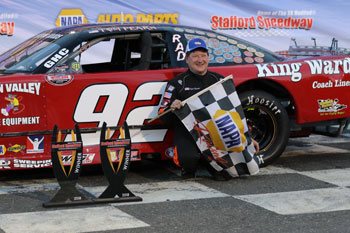 In the 30-lap Late Model feature event, it was a wild start as Kevin Gambacorta went 3 wide and nearly took the lead coming out of turn 2 but it was Al Saunders who emerged as the early leader. Darrell Keane got out of shape and drove through the grass on the backstretch but was able to keep going and the race stayed green. Tyler Leary took second with Gambacorta falling back into third after his 3-wide move. Michael Wray was fourth with Tom Butler quickly working his way up to fifth with Tom Fearn right on his bumper in sixth. Butler spun on the frontstretch but he kept going and the race stayed under green flag conditions briefly before the caution came out with 5 laps complete as Butler’s car came to a stop in the turn 1 grass.

Fearn led Gambacorta to the checkered flag to pick up his sixth consecutive win of the 2018 season and extend his Stafford track record for consecutive Late Model wins. Leary finished third with Arute and Al Saunders rounding out the top-5. 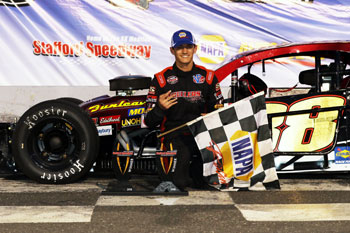 In the 20-lap SK Light Modified feature event, Cassandra Cole led the field to the green but she lost the lead to a 3-wide move that saw Geoff Nooney take the lead with Chris Viens taking second. Wesley Prucker moved into third with Mikey Flynn fourth and Marcello Rufrano fifth. Cole slid back outside the top-10 and the caution came out with 5 laps complete as Brett Gonyaw spun in turn 4 and Cole nearly spun in turn 3.

Nooney took the lead on the restart with Chris Viens moving into second. Prucker and Rufrano were side by side for third with Rufrano then taking the spot and moving by Viens for second. The caution came back out with 6 laps complete for a spin in turn 3 by Brett Gonyaw with Norm Sears also coming to a stop on the racetrack in turn 3.

Rufrano took the lead from Nooney on the restart with Mark Bakaj taking third. The action behind the lead trio was fast and furious with Mikey Flynn, Andrew Molleur, Bryan Narducci, George Nocera, Jr., and Teddy Hodgdon going 2 and 3 wide for several laps before getting sorted into a single file line.

With 5 laps to go, Rufrano was starting to pull away from Nooney and Bakaj while Narducci was up to fourth with Nocera, Flynn, Hodgdon, and Molleur lined up behind him after some more two and three wide racing. Bakaj was able to get by Nooney for second on lap-19 but it was all Rufrano as he scored his division leading fourth win of the 2018 season. Bakaj finished second with Nooney, Narducci, and Nocera rounding out the top-5. 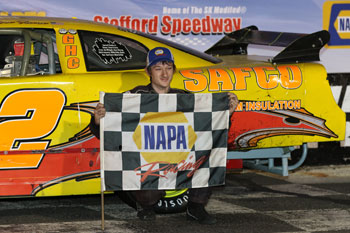 In the 20-lap Limited Late Model feature event, Gary Patnode and Matt Clement dueled for the lead for the first 2 laps before Ryan Fearn charged past them both and took over the lead on lap-3. Patnode settled into second with R.J. Surdell third, Jeremy Lavoie fourth, and Clement back to fifth. Justin Bren was working Clement over for the fifth spot and he took the spot on lap-5. The caution came out with 6 laps complete for a spin in turn 3 by Lavoie that collected the cars of Clement, Duane Provost, and Bren.

Fearn took the lead back under green with Patnode, Surdell, Steven Midford, and Andy Marchese lined up behind him. Surdell got around Patnode to move into second on lap-12 as Fearn continued to hold the lead. Marchese brought the caution back out when he got into the turn 4 wall with 16 laps complete.

Fearn took the lead back under green with Surdell holding off Patnode for second. Midford was fourth with Steve Martel in fifth. Fearn led the field to the checkered flag to pick up his third win of the 2018 season. Surdell finished second with Patnode, Midford, and Martel rounding out the top-5. 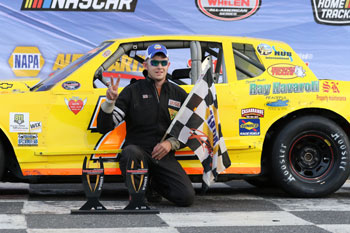 In the 20-lap Street Stock feature event, Richard Ciriello and Chris Bagnall ran side by side for the lead for the first lap before Ciriello got clear on lap-2. Nicole Chambrello was quickly working her way to the front as she moved into third on lap-3. Travis Hydar took the lead from Ciriello on lap-4 with Chambrello following Hydar by Ciriello to move into second. Jason Lafayette was now looking to take third from Ciriello with George Bessette, Jr. all over his back bumper.

Lafayette took third from Ciriello on lap-7 with Bessette following him through to drop Ciriello back to fifth. Brando Michael then took fifth from Ciriello on lap-8 while up front Chambrello was applying heavy pressure to Hydar for the lead. The caution came out with 8 laps complete as Scott Manse spun in turn 1 as the leaders were putting him one lap down.

Hydar took the lead back under green with Chambrello right on his bumper. Bessette was third with Meghan Fuller moving into fourth with Lafayette in fifth. Chambrello made a move to the inside of Hydar to take the lead on lap-11 but Hydar came back to Chambrello’s inside and as they entered turn 3, the two cars touched and spun, collecting Bessette with Chambrello’s car doing one full barrel roll to bring the caution and red flags out with 10 laps complete.

Fuller and Lafayette led the field back to the green flag with Fuller taking the lead. Michael was side by side with Lafayette for second with Tess Beyer up to fourth and Bagnall was in fifth. Beyer and Lafayette touched and spun in the middle of turns 1+2 to bring the caution back out with 11 laps complete.

Fuller took the lead on the restart but Michael pulled alongside Fuller and he took the lead on lap-12 with a pass in turn 3. Samantha Anderson spun in turn 2 to bring the caution back out with 12 laps complete.

Michael took the lead on the restart with Fuller in second. Bagnall was back up to third with Lafayette and Beyer lined up behind him. Lafayette made a 3-wide move to take over third place and his move allowed Beyer to follow him by and take fourth to drop Bagnall back to fifth. Beyer and Lafayette touched in turn 4 with Lafayette getting into the wall to bring the caution back out with 15 laps complete.

Michael again took the lead with Fuller second and Bagnall in third. Nick Bendiak was now in fourth with Ciriello back up to fifth. Michael led Fuller to the checkered flag to pick up his second win of the 2018 season. Bagnall finished third with Bendiak and Ciriello rounding out the top-5.