(Stafford Springs, CT)—Stafford Motor Speedway kicked off its final race event of the 2019 season with feature events for its Limited Late Model, and Street Stock divisions, as well as a feature event for the Vintage All-Stars and the special Ladies Challenge feature that raised over $18,000 for various charities as part of the Saturday NAPA Auto Parts Fall Final Weekend festivities. The Street Stock feature was also the third and final leg of the RSMPCO.com Street Stock Triple Crown that split $4,500 from RSMPCO.com among the top-10 finishers with Meghan Fuller taking home the winner’s share of $1,000. Taking feature wins were Matt Clement in the Limited Late Model feature, Fuller in the Street Stock feature, Don Howe in the Vintage All-Stars Feature, and Nicole LaRose in the Ladies Challenge. Jeremy Lavoie clinched his second consecutive Limited Late Model track championship and Zack Robinson became the 2019 Street Stock track champion. 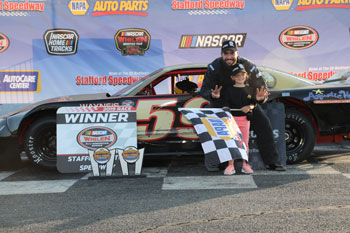 In the 20-lap Limited Late Model feature, Gary Patnode took the lead at the drop of the green and began to open up his lead over Matt Clement in second. Duane Provost was third with Jeremy Lavoie fourth and Andrew Durand in fifth. Clement was starting to close down the gap to Patnode and with 8 laps complete, Patnode’s lead was a car length over Clement with Provost and Lavoie right behind Clement. 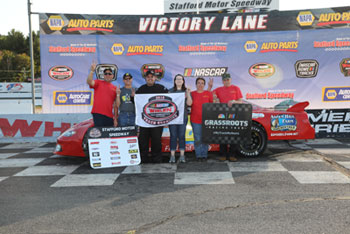 Clement was able to take the lead from Patnode on lap-12 and that move opened the door for Provost to move into second and Lavoie into third as Patnode slid back to fourth. Provost briefly took the lead from Clement on lap-18 but Clement was able to retake the lead. The two leaders took the white flag with Provost glued to Clement’s back bumper. Provost was unable to get by Clement as Clement scored his 7th win of the 2019 season. Lavoie finished third to clinch his second consecutive Limited Late Model track championship with Patnode and Devon Jencik rounding out the top-5. 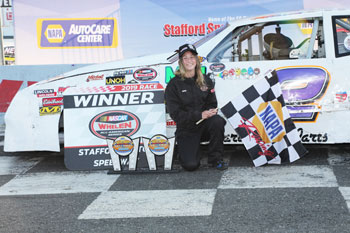 In the 30-lap Street Stock feature, Nicole Chambrello took the lead from polesitter Marvin Minkler at the drop of the green flag with Tyler Trott taking second. Meghan fuller was third with Minkler slotting into line in fourth and Tyler Trott was fifth in the early laps.

Zack Robinson made a move to the inside of Trott for fifth on lap-4 to move into fifth. Minkler’s car went high in turn 2 on lap-4 and he lost several positions and the caution came out for a spin by Dave Secore coming out of turn 2 with 4 laps complete.

Chambrello took the lead on the restart with Fuller and Hydar side by side for second. Robinson was fourth and behind him Walker, Adrien Paradis, III, and Trott went 3-wide for fifth with Walker taking fifth. Fuller took second and Robinson got by Hydar on lap-7 to move into third as Chambrello and Fuller were still leading the field. 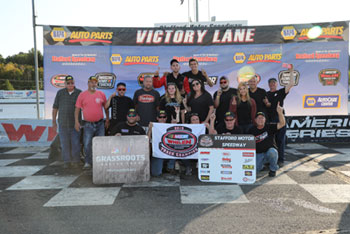 Fuller was applying heavy pressure to Chambrello and she was able to take the lead from Chambrello on lap-9. Robinson followed Fuller by Chambrello and took second. Hydar also took advantage of Fuller’s move for the lead to take third as Chambrello fell back to fourth with Walker fifth.   Hydar went around Robinson to take second place on lap-12.

At the halfway point of the race, Fuller held the lead with Hydar, Robinson, Walker, George Bessette, Jr., Jason Lafayette, Chambrello, Paradis, Trott, and Nick Bendiak lined up behind her in the top-10. Adam Huff and Bendiak both spun on lap-20 but they were both able to keep going and the race stayed green.

Hydar was starting to apply heavy pressure to the back bumper of Fuller on lap-22, looking high and low for a way to get by and take over the lead. Fuller was still leading Hydar as they came to the two to go mark. Fuller was able to hold off Hydar to the checkered flag to pick up her fifth feature win of the 2019 season. Robinson finished third, which made him the 2019 Street Stock track champion. Walker finished fourth with Bessette rounding out the top-5. 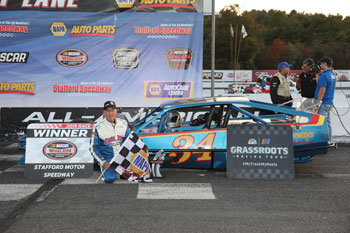 In the 15-lap Vintage All-Stars feature, Don Howe took the lead at the green with Scott Anderson, Jim Kelly, Mark Miller, and John Maybury making up the top-5. The caution 2 complete for a spin in turn 2 by Frank Saladino.

Howe took the lead back under green with Anderson, Kelly, Maybury, and Miller making up the top-5. Howe and Anderson were quickly stretching out their advantage over Kelly in third. The two leaders split a lapped car going three-wide on lap-8 with Howe maintaining the lead over Anderson.

The two leaders continued to split lapped traffic with Howe able to keep Anderson behind him. They came to the white flag with Anderson right on the back bumper of Howe but he was unable to make a pass as Howe took the checkered flag. When the race was over, Dave Morgensein took a Bob Potter Tribute car around the track for a tribute to the 5-time Stafford track champion who passed away. 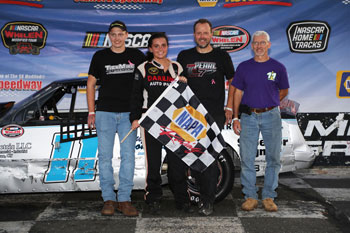 In the 8-lap Ladies Challenge feature event, Debbie DeSanctis took the lead at the green with Nicole LaRose right behind her in second. LaRose took to the outside lane to take the lead from DeSanctis on lap-2. DeSanctis nearly retook the lead on lap-3 but LaRose used lapped traffic to her advantage to keep DeSanctis behind her.

DeSanctis regrouped and charged back into the lead on lap-5 but the caution came out with 4 laps complete for a spin in turns 1+2 by Brianna Macha to put LaRose back in front for the restart.

LaRose took the lead on the restart with DeSanctis giving chase from second. The caution came out with 5 laps complete as DeSanctis spun in turn 2.

LaRose took the lead on the restart with Laura Secore taking second. Dana Janetty was third in line with DeSanctis coming from the back up to fourth and Mary Ann Gambacorta was fifth. It was all LaRose at the front as she took the checkered flag to win the Ladies Challenge. DeSanctis charged back up to second at the end with Secore, Jannetty, and Gambacorta rounding out the top-5.