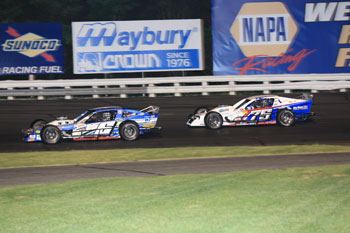 (Stafford Springs, CT)—After racing in the Legend Cars division at Stafford and scoring 7 wins from 2014-2015, Farmington native Cory DiMatteo moved into SK Light competition for the 2017 season. DiMatteo’s rookie campaign was filled with a combination of the highest of highs and lows but in the end DiMatteo and the #6 Island Cove Marina team were strong and consistent enough to win the track championship.

Winning a championship as a rookie driver usually isn’t a commonplace thing, but DiMatteo becomes the fourth rookie driver to win the SK Light championship at Stafford, joining Michael Gervais, Jr. in 2009, Matt Galko in 2010, and Jeremy Sorel in 2015. DiMatteo tied for the division lead with 4 wins this season and he also tied for the division lead with 14 top-10 finishes.

“I knew we would be good but I never thought we’d be this good,” said DiMatteo. “I figured we might get some top-5’s and maybe a win. We definitely exceeded my expectations.” 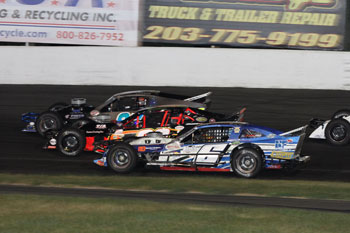 DiMatteo’s championship campaign ran the gamut of highs and lows throughout the year. DiMatteo began the season by winning the first two races to get himself off to a 20 point lead in the race for the championship. But just as DiMatteo and the team were riding high after those first two races, they ran into some troubles with three finishes outside of the top-15 in three of the next five races to fall as far down as 7th in the championship standings and as much as 48 points out of the lead. Just as things were not looking good, DiMatteo and the #6 team got their season back on a good track and they scored ten top-6 finishes in the final 10 races to slowly but surely get back into championship contention and ultimately win the championship.

A major turning point in the season was the final Friday Night Shoot-Out on Sept. 22nd. DiMatteo entered that race second in the points, 6 points behind David Arute with Dan Wesson third, 12 points behind DiMatteo and 18 points behind Arute. Arute got caught up in a wreck during that race while Wesson won and DiMatteo finished third, setting up a championship duel between Wesson and DiMatteo at the NAPA Fall Final with Arute a longshot for the championship. Wesson finished third in the NAPA Fall Final feature with DiMatteo right behind him in fourth and that was enough to clinch the championship by a 4 point margin over Wesson. 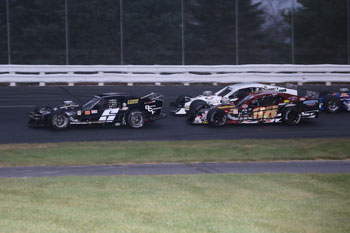 “It’s been a long roller coaster season and we’ve had a lot of ups and downs and I’m just happy to finish on top,” said DiMatteo. “I just tried to put [the points race] in the back of my mind and tried to go out and win races. One week you look and you’re ahead and the next week you look and it looks like you have no shot. I guess it’s just Stafford, this place is crazy. It’s kind of a shock and disbelief that we won the championship. It’s definitely been cool to come here as a rookie and run the way we have and win the championship.”

DiMatteo will officially be recognized as the 2017 SK Light champion at the 48th Annual Stafford Speedway Champions Awards Ceremony to be held on Friday, November 17 at Maneeley’s in South Windsor.