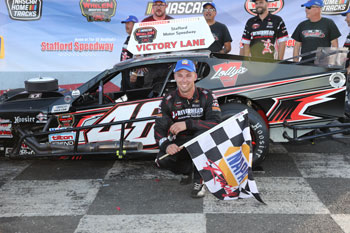 Craig Lutz took the lead from Doug Coby on a restart with 33 laps to go, and drove away from Coby, and defending series champion Justin Bonsignore, to earn his first career checkered flag in his 66th series start.

For the first time, the Miller Place, New York, driver was able to celebrate a trophy.

“The first win is always special,” Lutz said. “Everyone kept on asking me when it was coming. To finally knock one off, it’s an amazing feeling.”

Lutz started ninth and rode inside the top 10 for the duration of the race, but shined when it mattered most. Chris Pasteryak earned his first career Mayhew Tools Dominator Pole award in qualifying, and led the first six laps, before Coby took control. 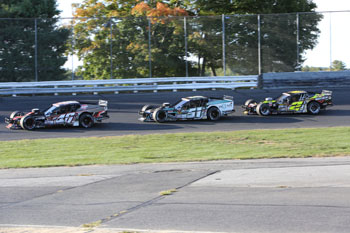 Bonsignore took the lead from Coby just before halfway, and paced the field until a caution just after lap 100, when leaders pitted multiple times for tires. It would be the only caution of the day that Coby, Bonsignore and Lutz entered pit road.

Pasteryak would lead eight more laps after cycling back to the lead, but couldn’t hold the top spot, as Coby slid by, then a restart gave Lutz his opportunity. Lutz passed Coby and never looked back, minding a gap back to Bonsignore for the final 10 laps.

“I just didn’t look in my mirror,” Lutz said. “I have an awesome spotter, who has a lot of experience, and he kept telling me to stay smooth and hit my marks. That’s what I kept doing.”

Bonsignore would finish second, while Coby settled for third. Chuck Hossfeld, who missed practice and qualifying on Saturday, charged from the rear of the field to finish fourth. Matt Swanson was fifth.

The NASCAR Whelen Modified Tour returns to the track for the annual Sunoco World Series at Thompson Speedway Motorsports Park, the final race of the season, on Sunday, October 13.