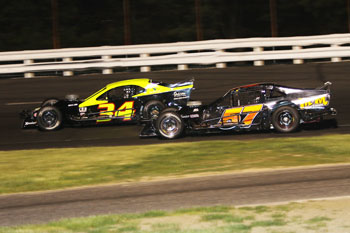 (Stafford Springs, CT)—Stafford Speedway will host the Valenti Modified Racing Series for the first of two races in 2018 Friday, May 18, and perhaps no driver is more excited for the race than Portland, CT native Dave Etheridge. The driver of the #34 Warner Turf Equipment / Belltown Motors Chevrolet is looking for his first top-10 finish of the 2018 season after finishes of 13th at Thompson and 19th at Waterford. Stafford has been a good track for Etheridge over the past two seasons with top-4 finishes in four of out of the last five VMRS races held at Stafford in 2016-2017.

“We’re looking to have a good run,” said Etheridge. “The car is always solid, especially at Stafford. It’s my home track and it seems like we’ve been really running well there lately. At Thompson I was driving someone else’s car and that didn’t really pan out so now I’m back in my own car. We blew the dust off the car at Waterford and now we have a couple weeks to work on it to get it ready for Stafford, where we’re looking to have a good run.”

While Etheridge’s record at Stafford over the last 2 years has been stellar, he says that his car is still lacking in the setup department to be good for the final 20 laps of the 80-lap VMRS race. Etheridge will have help in the setup department as he will be bringing a second car for Anthony Flannery, who is coming off a career best second place finish at Waterford.

“Every time we come to Stafford we seem to be running up front,” said Etheridge. “It always comes down to the last 20 laps where we’ve been working on our setup to make the car better for the end of the race. We’ll have Anthony Flannery in a team car and he’s been trying some different things and it seems to be working for him with the 2nd place finish at Waterford. The plan is to have a couple of setups to try during practice and see if maybe Anthony’s setup works better or not. His stuff seems to work pretty well so we’re going to give it a shot at Stafford and see how it works. We’ll have the car where we can change the setups back and forth pretty quickly if I don’t like Anthony’s setup I’m pretty confident that my basic setup I always come to Stafford with will be pretty good.” 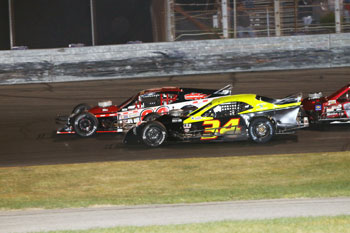 “We always want to win and do well for the sponsors and all the guys on the team who work so hard on these cars,” said Etheridge. “At the same time I want to see Anthony do well and try to help him along with his career because I think he’s a heck of a wheelman. Any win is special but I think a win at Stafford would be a little more special since that’s where I got started with the ProStock and Stafford is the premier track around to be racing at.”

Competition for the checkered flag is going to be tough as Rowan Pennink has already won 2 of the first three VMRS races of the season and Etheridge knows that he will have to look out for other SK Modified® drivers who will be pulling double duty.

“It seems like Rowan has a good setup going this year and whichever SK Modified® guys are doing double duty are going to be strong,” said Etheridge. “Anthony Nocella has been strong at Stafford and I think there’s about 10 cars that could win the race. The SK Modified® division is so tight that those guys are always searching for any little thing that will make them faster, so I think those guys might have a little bit of an advantage over guys who don’t run weekly.”

Etheridge will also be looking for a good finish in Stafford’s upcoming Open Modified 80 races on June 8 and July 13, which both he and Flannery are entered for both races.

“I’m real excited for those Open Modified 80 races,” said Etheridge. “Any time we show up to Stafford we feel like we’re a contender and I think we’ve shown that the last few times we’ve been to Stafford by running up front and leading some laps so we’re looking to do that again in the open shows.”