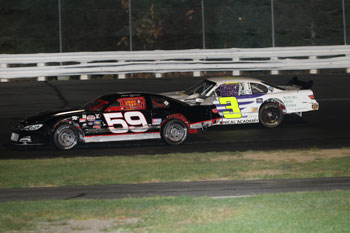 (Stafford Springs, CT)—After getting his feet wet with a five-race foray into the Limited Late Model division in 2015, Southampton, MA native David Tefft ran his first full season at Stafford Speedway in 2016 with a truly unique crew.  Tefft and his students from Westfield Technical Academy and now William J. Dean Technical High School help serve as his crew both in the shop during the week and at the track on Friday nights.  Tefft and his team of students are busy preparing his #3 machine for action in 2017.  With a full season under their belts, Tefft is expanding the student program to include students from Dean Technical High School to join his students from Westfield.

“The car is at school 100% of the time and I’d say over the last year we’ve had on and off around 35 different kids as part of the program,” said Tefft. “During the season whatever work on the car that is curriculum relevant we do during the day and if it isn’t then we usually take one day a week after school to come in and work on the car and we keep the same schedule during the offseason. Currently we’re at a point of doing some paint and touchup work on the car. On average I’d say I have 2 or 3 students at the track with me each Friday night and we have our sponsors Belco Construction, Alburg Golf Links, and Westfield Sign Shop to thank for getting them into the track each Friday night. I’d say this program has been a success so far. I don’t think any other schools offer a program like this. Whereas playing basketball or football doesn’t really apply to a student’s trade area, we’re doing things that will directly apply to student’s fields once they graduate. We’re looking at adding students from Dean Technical High School to join our students from Westfield to make this program even bigger and better.” 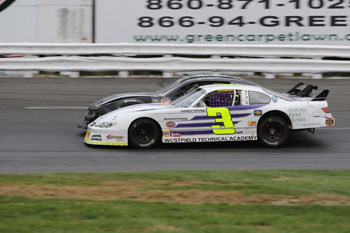 While the main focus of the #3 team is automotive, the world of auto racing has drawn students from all different departments at the school. In addition to racing the car on Friday nights, Tefft has brought his #3 machine to local fairs and car shows to show off and promote his student program, which reaches into the marketing world and draws students from some of the other vocational programs that Westfield Technical Academy has to offer.

“We did a lot of work at the end of the year doing local fairs like the Taste of Westfield in the hopes of picking up another sponsor or two,” said Tefft. “I had several students helping me out with the shows so they’re getting the marketing side of things as well as the automotive. Our business technology group created some pamphlets that we handed out at shows that explained the program for the shows we did. This project encompasses many trade areas such as marketing, graphics, business, collision, and auto technology. We actually have a lot of parts on the car that were made by our machine technology department. They did our alternator brackets and if you could have looked under the hood of the car, you would have seen the school logo engraved into the brackets.”

After struggling a bit with the car during the first half of the 2016 season, Tefft and his team of students got things turned around in the second half by recording top-10 finishes in 7 of the remaining 9 races. Tefft ended the 2016 season on a high note with a second place finish in the NAPA Fall Final feature event. Tefft started up front and he led for the majority of the 20-lap distance before losing the lead with 2 laps to go. This highlight performance has Tefft and his crew of students looking forward to what they can accomplish together in 2017. 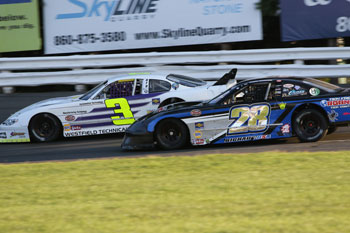 “We made some good leaps and bounds towards the end of last year,” said Tefft. “We went through some rough patches to start off with and we got a lot of different opinions on what we needed to do with the car and I tried them all. Some ideas worked and others didn’t quite work out so well. Towards the end of year we put together the things that did work for us. With some help from Bob Fill we got the car dialed in and we were 2nd fastest in the Fall Final practice and we led for most of the race until my mind got running and I overdrove a couple corners and blew it. We got a 2nd place finish and we’re excited to come back with a similar setup for the Spring Sizzler. That race was huge for us. I had a pretty good idea I could wheel the car and it was really special to give the students who have put their hard work into the car some reward for their efforts. They all keep up on how well we do at the track and a funny thing last year was early in the year I had spun out and hit the wall. I was in a similar situation later on in the year and I kept my foot to the floor and I drifted through the corner so the kids kind of made me famous on social media throughout the school for my drifting ability. While all the kids enjoyed that, I had to explain that drifting normally isn’t the quickest way to get around the track.”

With a second place finish to their credit, Tefft says the goal is to now get the car into NAPA Victory Lane and stand on the top step of the podium. 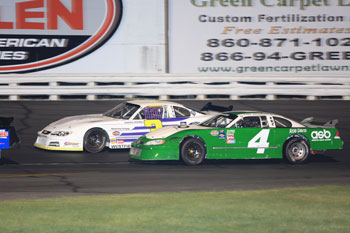 “A win would be a huge thing for this program,” said Tefft. “I’ve thought back to how long it took to get this program up and running and to be able to stand on the top step of the podium would be something way ahead of what I could have ever expected. The competition at Stafford is some of the toughest in the Northeast and a win at Stafford would be very gratifying for us. We’re looking good and I’m pretty excited about 2017. We definitely want to pull off a win this year and a few top-3 finishes would be nice. I don’t think I can say we’ll contend for the championship but a top-5 or top-6 finish in the points would be outstanding for us.”

Tefft and his student crew will get their first opportunity to go for victory lane of the 2017 season as part of the 46th Annual NAPA Auto Parts Spring Sizzler on April 28-30. Tickets for the “Greatest Race in the History of Spring” are on sale now at the Speedway Box Office. Tickets are priced at $40.00 for adult general admission tickets, $5.00 for children ages 6-14, and children ages 5 and under are admitted free of charge when accompanied by an adult. Reserved seating is priced at $42.00 for all ages. As always, Stafford Motor Speedway offers free parking with overnight parking available. All tickets are good for both Saturday and Sunday admission. All ticket prices include 10% CT Admission Tax.