(Stafford Springs, CT)—Stafford Speedway hosted the Whelen Modified Tour for the NAPA Auto Parts 150 with the SK Lights, Limited Late Models, and Vintage All-Stars also in feature action.  Derek Debbis scored his 7th win of the 2021 season in the SK Light feature, Mike Hopkins took down his second win of the 2021 season in the Limited Late Model feature, and Ben Levangie won the Vintage All-Stars feature with a last lap pass. 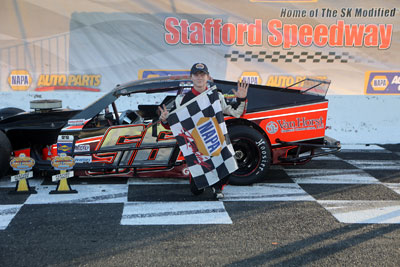 In the 20-lap SK Light feature event, Tyler Barry took the lead at the drop of the green flag with Meghan Fuller right behind him in second.  Amanda West and Chris Matthews were side by side for third with Nick Anglace and Tyler Chapman side by side for fifth.  West and Fuller slid backwards on lap-7 as Matthews moved up to second, Tyler Chapman third, Anglace fourth, and Alexander Pearl fifth.  Fuller fell back to ninth place and West faded back to eleventh place.  The caution came out with 10 laps complete for Geoff Boisjolie, who came to a stop on the frontstretch infield.

Matthews took the lead on the restart with Tyler Chapman taking second.  Pearl was looking to take third, but his car got loose in turn 2 which bottlenecked the field  behind him and saw Casey Vogt spin to bring the caution flag back out with 11 laps complete.

Matthews again took the lead back under green with Pearl taking second.  Tyler Chapman was third in line with Derek Debbis fourth and Barry fifth.  Nick Halkowicz spun coming out of turn 4 to bring the caution back out with 13 laps complete.

Matthews continued to hold the lead on the restart with Tyler Chapman moving up to second.  Pearl was third but he was able to get around Chapman on lap-15 to move into second.  Debbis followed him by to take third and drop Chapman back to fourth, just in front of Barry.  The caution came back out with 17 laps complete as Alina Bryden ended up against the turn 4 wall with several other cars spinning.

Matthews took the lead with Debbis getting by Pearl to move up to second on the restart.  Tyler Chapman was fourth in line with Brian Sullivan in fifth.  Debbis got into the back of Matthews as they took the white flag but Matthews was able to stay out front.  Debbis took the lead from Matthews in turns 3+4 coming to the checkered flag and he picked up his seventh win of the 2021 season.  Matthews finished second with Pearl, Tyler Chapman, and Sullivan rounding out the top-5. 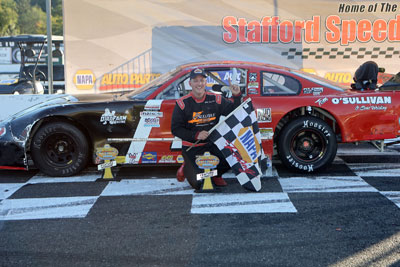 In the 20-lap Limited Late Model feature event, R.J. Surdell led the field to the green but Ari Jencik took the lead on the opening lap.  Mike Hopkins went around Surdell on lap-2 to move into second with Matt Clement and Rich Hammann lined up behind Surdell.  Alexandra Fearn was on the charge, moving up to fifth by lap-5 after starting at the rear of the field.  Clement slid back to sixth place while Hammann was up to fourth.

Hammann went by Surdell on lap-9 to move into third and Fearn followed him by Surdell on lap-10 to move up to fourth and drop Surdell back to fifth place.  The caution flag came out with 12 laps complete as Gary Patnode had a flat right front tire and rode the frontstretch wall until he came to a stop at the entrance of turn 1.

Ari Jencik took the lead back under green with Hopkins settling into second after taking a look for the lead.  Hammann was third with Fearn in fourth and Surdell in fifth.  Jeremy Lavoie got by Surdell to move into fifth on lap-18 and lap-19 saw Hopkins take the lead from Jencik.  Jencik slid back to fourth place as Hammann moved into second and Fearn took third place.  Jencik got into the turn 1 wall to bring the caution out with 19 laps complete and set up a green white checkered finish.

Hopkins took the lead with Hammann, Fearn, Lavoie, and Clement lined up behind him.  That is the way they came to the checkered flag as Hopkins took down his second win of the 2021 season. 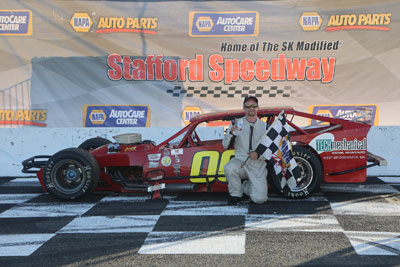 In the 15-lap Vintage All-Stars feature event, Ben Levangie took the lead at the green but Jim Lowrey streaked into the lead before the first lap was completed.  Boots Jasinsksi was third in line followed by Glen Billings and Mark Miller.

The duel for the lead lasted all the way to the final lap where Levangie got around Lowrey and took the checkered flag to back up his Vintage All-Stars feature win from the NAPA Spring Sizzler back in April at Stafford.  Jasinski finished third with Gagner and Miller rounding out the top-5.