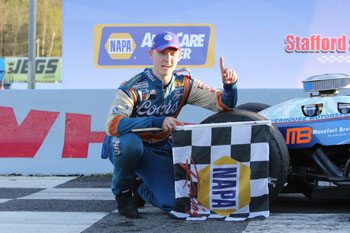 The 20-lap SK Light Modified feature took the green flag with Joey Ferrigno taking the lead on the outside of Andrew Les. The field completed 2 laps before the caution came out for Brett Gonyaw, who got into the wall coming out of turn 2 and came to a stop on the backstretch.

Ferrigno took the lead back under green with Tony Santangelo hot on his bumper. David Arute was up to third with Glenn Griswold in fourth and Jay Goff fifth. Marcello Rufrano and Chris Matthews were side by side for sixth as Ferrigno began to stretch out his advantage over Arute in second.

The caution came out with 8 laps complete as Geoff Nooney and Marcello Rufrano came together in turn 2.

On the restart, Arute ended up against the turn 2 wall to bring the caution right back out due to a flat right front tire. Ferrigno powered his way into the lead on the restart with Matthews lined up right on his bumper in second. George Nocera, Jr. was side by side for third with Cory DiMatteo after starting deep in the field. The caution came back out with 10 laps complete for spins by Glenn Bartowski and Nathan Pytko.

Ferrigno took the lead on the restart with DiMatteo moving into second. Dan Wesson moved into third with Nocera fourth and Matthews fell back to fifth. Wesson went by DiMatteo on lap-13 to take over second place. Wesson was now looking on the outside of Ferrigno for the lead but he fell back into a side by side duel with DiMatteo for second and then fell back into line in third on lap-15 as Ferrigno continued to lead. The caution came back out with 16 laps complete as Chris Viens and Ted Cain spun in turn 1.

Cain’s car turned into the frontstretch wall on the restart to bring the caution right back out. Ferrigno took the lead with Wesson all over his bumper on the restart. As they took the white flag, Wesson was looking on the high side of Ferrigno. As they raced through turns 1+2, Wesson went to make a crossover move and the two cars touched and Ferrigno spun. Wesson was black flagged by NASCAR Officials, making DiMatteo the winner in his very first SK Light start. Keith Caruso finished second with Nocera, Santangelo, and Wesley Prucker rounding out the top-5. 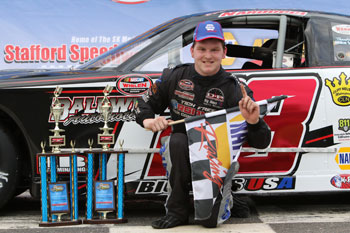 The 20-lap Limited Late Model feature took the green flag with Al Saunders blasting into the lead. Duane Provost quickly took second with Bryan Narducci in third, Jeremy Lavoie in fourth and Robert Bloxsom, III was running fifth until lap-7 when David Tefft took the spot from him. The caution came out with 7 laps complete for a spin in turn 3 by R.J. Surdell and Matt Clement.

Provost took the lead from Saunders on the restart but it was a short lived time out front as Saunders went back to the front one lap later. The caution came out with 8 laps complete for a spin coming out of turn 2 by Tyler Trott.

Saunders took the lead with Narducci and Provost side by side for second behind him. Tefft moved up to fourth with Lavoie hold on to the fifth position. Trott spun in the middle of turns 3+4 to bring the caution back out with 10 laps complete.

Narducci made a power move on the restart to take the lead on the outside of Saunders. Saunders came right back at Narducci and was all over his back bumper for the lead but Narducci was able to stay out front. Provost was third with Lavoie fourth and Bloxsom fifth. Surdell spun in the middle of turns 3+4 to bring the caution out with 14 laps complete.

Narducci took the lead back under green with Provost and Saunders side by side for second. Bloxsom took fourth with Lavoie falling back to fifth in line. Provost took second from Saunders on lap-16 and Bloxsom moved up to third as Saunders fell back to fourth. Saunders lost fourth to Lavoie on lap-17 and he had Tefft now hounding him for fifth as Narducci took the two to go signal from the flagstand.

Narducci held Provost off to the checkered flag to pick up the feature victory. Bloxsom finished third with Lavoie and Saunders rounding out the top-5. 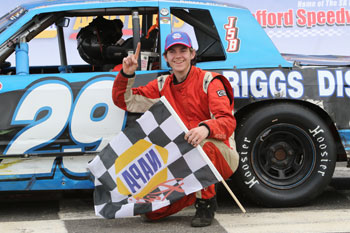 The 15-lap DARE Stock feature took the green flag with Trace Beyer shooting into the lead with Michael Hopkins and Zack Robinson lined up behind him. The field completed one lap before the caution came out for a spin in turn 4 by Paul Bourdon, Jr.

At lap-10, Beyer was still in command with Robinson and Walker now dueling for second and third with Hopkins and Michael having fallen back some from the leaders in a battle for fourth. Walker got around Robinson to move into second on lap-12 as they navigated their way through lapped traffic but a caution with 14 laps complete for a spin in turn 4 by Jake Higginson brought the field together to set up a green white checkered finish.

Beyer charged into the lead while Walker looked to have a problem with his car as he fell from second all the way back to 13th place. Robinson and Michael moved into second and third but they couldn’t catch Beyer as he took the victory. Robinson, Michael, Vince Gambacorta, and Nicole Chambrello rounded out the top-5 behind Beyer. 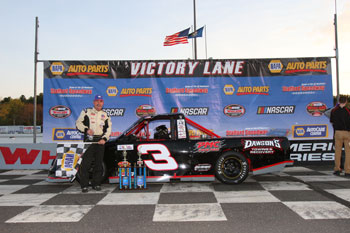 In the 20-lap Mr. Rooter Truck Series feature, Andy Lindeman took the lead at the green with Dan Turbush and Gerald Giordano in tow. Jim Thompson spun in turn 2 to bring the caution out with 1 lap complete.

The restart came on lap-8 with Erin Solomito hitting the wall and then Jordan Churchill found the wall as well to bring the caution and red flags out.

Lindeman and Giordano ran side by side for a lap on the lap-14 restart before Lindeman got clear into the lead on lap-15. Frank Dumicich took over second on lap-15 with Tony Lafo, Turbush, Jim Boyle, and Allen Coates all moved up a spot as Giordano fell back to seventh. Giordano worked his way back up to fifth by lap-23 as Lindeman held a several truck length lead over Dumicich. Frank Dumicich, Sr. spun in turn 1 to bring the caution out with 28 laps complete.

Lindeman took the lead on the lap-31 restart with Lafo moving into second. Dumicich, Jr. pulled back alongside Lafo but he fell back and then lost third to Josh Stringer on lap-32. Coates spun in turn 4 with 32 laps complete to bring the caution out.

Lindeman took the lead back under green with Stringer second and Duane Noll in third. Stringer couldn’t catch up to Lindeman as Lindeman took the checkered flag. Noll finished third with Dumicich, Jr. and Lafo rounding out the top-5.