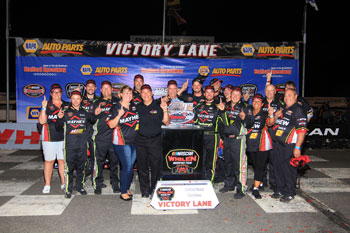 STAFFORD, Conn. — Doug Coby was not going to be denied on Friday night at Stafford Motor Speedway.

The five-time and defending NASCAR Whelen Modified Tour champion was sliding through the grass early on, and had to pass more than a handful of cars in his efforts to charge back to the front of the field.

However, when it mattered most, the Milford, Connecticut, pulled back into Victory Lane for the first time in nearly one year.

The victory in the Starrett 150 was the first of the season for Coby, his 24th career in Whelen Modified Tour competition and the 11th of his career at the historic Stafford half-mile.

“It’s been a long time coming,” Coby said. “We didn’t win at Stafford at all last year, and it seemed to be a place we were always good at. When I have a good car here, I like to try and defend my home-turf. This is great for our team. We are excited to be back in Victory Lane.” 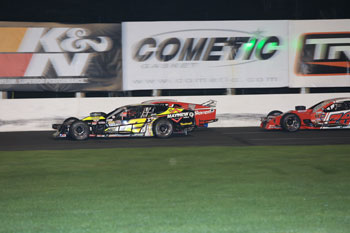 Coby found himself racing Justin Bonsignore for the lead on lap 13 when the two made contact and Coby went sliding through the grass, narrowly avoiding disaster and entering the track back in the 15th position. Luckily for him, the wreck left him with no damage, but from there, it was an uphill battle for the veteran.

He pitted on multiple occasions, slowly worked his way back up through the field, and stayed out during a caution on lap 118, taking the lead of the race and putting himself in position to control the finish.

A caution on lap 140 gave the field one more chance to pass Coby, but no one could make it happen. Woody Pitkat charged through the field after pitting for fresh Hoosier rubber during a caution late and crossed the line second.

The effort was the first podium for Pitkat in Whelen Modified Tour competition since August of 2015 at Bristol Motor Speedway.

“I’m just happy for Danny (Watts) and happy for all the guys that never give up,” Pitkat said. “We have been battling and trying to get better. Obviously, I would like to win. But this is like a win for our team.”

Eric Goodale made a charge through the field late and finished third, followed by Rowan Pennink, who led a race-high 50 laps. Timmy Solomito rounded out the top five.

Justin Bonsignore leads Dowling by 51 points in the championship standings after Dowling was involved in a wreck and finished 25th. Timmy Solomito is third, 64 points from the lead.

The NASCAR Whelen Modified Tour returns to the track on Wednesday, August 8 with the Bud 150 at Thompson Speedway Motorsports Park.