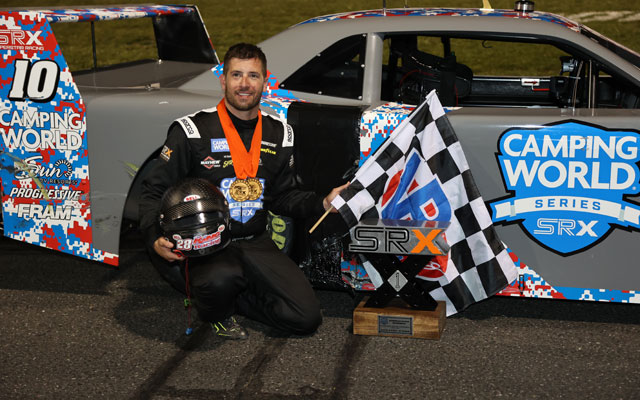 (Stafford Springs, CT)—Stafford Speedway welcomed the Superstar Racing Experience for its inaugural race that was shown live on CBS.  The SRX cars took to the Stafford half-mile for 2 heat races before the 100 lap feature began.  Greg Biffle won the first heat race where the field was inverted for the second heat race, which would set the starting lineup for the feature.  Doug Coby won the second heat to score pole position for the 100-lap main event that he would go on to win in domination fashion, leading 80 of the race’s 100 laps.

The 100-lap SRX feature event took the green flag with Doug Coby and Michael Waltrip leading the field to the green.  Coby took the lead at the drop of the green flag while Tony Stewart quickly took second from Waltrip.  Ernie Francis, Jr. was fourth and Tony Kanaan was fifth.  The caution came out on lap-4 when Francis made contact with Waltrip to send Waltrip into a spin in turn 3.

The race restarted on lap-10 with Stewart nearly taking the lead from Coby but the two cars remained side by side for the lead.  Marco Andretti was third in line followed by Greg Biffle and Francis.  Lap-12 saw Andretti make a 3-wide move in turn 4 to pass both Coby and Stewart to move into the lead.  Biffle took second with Coby falling back to third in line.  Stewart was fourth with Francis still in fifth place.  Helio Castroneves was sixth followed by Kanaan, Bobby Labonte, Waltrip and Paul Tracy.

Biffle took the lead from Andretti on lap-15 and he brought Coby into second place and dropped Andretti back to third.  Stewart got around Andretti for fourth place on lap-18 and Francis followed him by to take fourth and drop Andretti back to fifth.

Coby made a move to the inside of Biffle on lap-24 and he completed the pass on lap-25 to retake the lead.  Stewart was still running in third with Francis fourth and Andretti fifth.  Biffle took a look to the inside of Coby on lap-31 and the two cars touched briefly with Coby maintaining the lead.  Andretti fell back several spots on lap-37 to seventh as Castroneves took fifth and Labonte moved into sixth while Coby continued to lead Biffle, Stewart, and Francis.  A competition caution flew on lap-41 that slowed the field.

On the restart, Coby took the lead although he had to fend off a heavy challenge from Stewart.  Biffle snuck by Stewart to take second with Stewart settling into third place.  Andretti was back up to fourth with Kanaan up to fifth as Waltrip got sideways with damage to his rear wing and came to pit road several laps later.

Castroneves worked his way around Kanaan to take fifth on lap-51 and Kanaan and Francis engaged in several laps of a heavy fight for sixth place before Kanaan fell back to eighth place.  Castroneves made a dive bomb move on Andretti going into turn 3 with the two cars touching and Andretti spinning to bring the caution out on lap-58.

The lap-63 restart saw Biffle take the lead by a nose at the line before Coby went back to the front on lap-64.  Stewart was still in third with Labonte now up to fourth and Castroneves was fifth in line.  Francis was sixth followed by Kanaan, Andretti, Paul Tracy, and Willy T. Ribbs.

The race restarted on lap-98 with Coby taking the lead ahead of Biffle and Stewart.  Neither Biffle or Stewart could get close enough to Coby over the final 2 laps as Coby scored the victory.  Biffle finished second with Stewart, Castroneves, and Labonte rounding out the top-5.  6th through 10th was Francis, Kanaan, Ribbs, Tracy, and Andretti.  Waltrip finished 11th and Bill Elliott finished 12th after retiring early in the race with a mechanical issue.