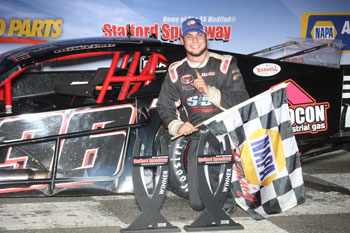 In the 40-lap SK Modified® feature event, D.J. Burnham took the early lead but he would lose the lead to Chase Dowling on lap-4. Matt Galko moved into second with Todd Owen taking third as Burnham slid back to fourth in line. Michael Gervais, Jr. was fifth in line with Eric Berndt all over his back bumper in sixth.

With 14 laps complete, the order was still Dowling up front with Galko, Owen, Berndt, and Mike Christopher, Jr. giving chase. Ronnie Williams was up to sixth with Gervais falling back to seventh in line.

With 10 laps to go, Dowling was in command of the race with Berndt behind him in second. Owen was third with Williams and Michael Christopher, Jr. making up the top-5. Williams got around Owen to take third on lap-33 and he began to close in on Berndt in second.

Dowling took the checkered flag to pick up his first win of the 2018 season. Berndt finished second with Williams, Owen, and Christopher rounding out the top-5. 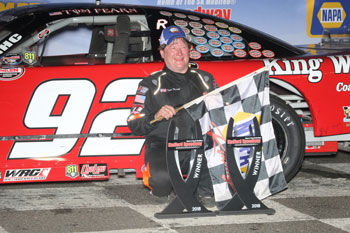 In the 30-lap Late Model feature event, Michael Wray took the early lead with Darrell Keane quickly moving up to second. Al Saunders was third in line with Tom Fearn quickly moving into fourth and Tyler Leary was fifth in line. Fearn went by Al Saunders to take over third on lap-9 and he took second from Keane on lap-13 as Wray continued to lead the race. Al Saunders and Leary were still fourth and fifth with Glen Reen up to sixth. Cliff Saunders spun in turn 4 to bring the caution out with 14 laps complete.

The caution came back out one lap after the restart as Keane got into the wall and came to a stop in turn 3 with Chase Cook taking a half spin in turn 3. The next restart saw Paul Arute go around in the middle of turns 3+4 to bring the yellow right back out.

Fearn nearly took the lead on the restart but Wray held him off and maintained the lead. Leary moved into third with Glen Reen moving into fourth and Kevin Gambacorta fifth as Shawn Thibeault slid back several spots. Fearn took the lead from Wray on lap-17 with Leary, Reen, and Gambacorta making up the top-5.

Fearn led Wray to the checkered flag to pick up his third consecutive win of the 2018 season. Leary finished third with Reen and Gambacorta rounding out the top-5. 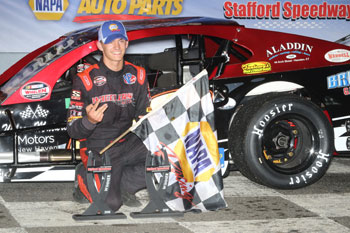 In the 20-lap SK Light Modified feature event, Rich Hammann took the lead at the green while SK Light points leader Brett Gonyaw dropped off the pace on the backstretch with a damaged left front tire. The caution came out with 2 laps complete as Ed Chicoski spun in turn 3 and Gonyaw came to a stop at the entrance to pit road. Under the caution, Mark Bakaj parked his car behind the pit wall and was done for the evening.

Hammann got out of shape on the restart and slid back in the field as Chris Viens took over the lead with Teddy Hodgdon and Marcello Rufrano behind him. Hodgdon took the lead from Viens on lap-4 with Rufrano following him through to take second. Viens fell back to fifth in line as Bryan Narducci was up to third and George Nocera, Jr. took fourth.

Rufrano took the lead from Hodgdon on lap-7 and Narducci followed him by to drop Hodgdon back to third in line. Narducci pulled alongside Rufrano for the lead on lap-8 and they ran side by side for the lead until the caution came out with 9 laps complete for the cars of Joey Ferrigno and Mark Alkas, who spun in turn 3.

Narducci looked like his car didn’t fire off quite as quickly as Rufrano on the restart and he fell back to third in line behind Hodgdon, but he took the spot back from Hodgdon on lap-11. Andrew Molleur was up to fourth with Nocera in fifth. Molleur made a move to take third from Hodgdon on lap-13 while Narducci was slowly closing in on the bumper of Rufrano for the lead.

Narducci caught Rufrano with 3 laps to go and was looking high and low for a way to take the lead. Narducci gave Rufrano a tap to the bumper in turn 3 on the final lap but Rufrano wasn’t fazed as he calmly took the checkered flag to pick up his second consecutive win and third of the 2018 season. 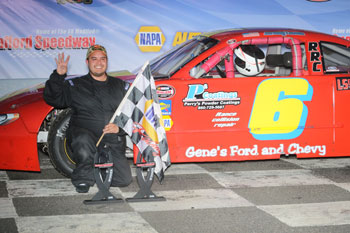 In the 20-lap Limited Late Model feature event, Matt Clement and Duane Provost brought the field to the green flag and they ran side by side for the first lap before Alexandra Fearn made a 3-wide move on lap-2 to take over the race lead. R.J. Surdell moved into second with Ryan Fearn third as Clement fell back to fourth and Provost fell back to sixth, one spot behind Justin Bren.

Ryan Fearn got around Surdell for second on lap-3 and was starting to close in on his sister for the race lead when the caution flew with 5 laps complete for spins on the backstretch by Provost, Clement, and Bren.

Alexandra Fearn took the lead on the restart with Ryan Fearn right behind in second. Surdell was third with Jeremy Lavoie up to fourth and Andy Marchese was fifth. Marchese spun in the middle of turns 3+4 to bring the caution out with 6 laps complete.

Alexandra Fearn again took the lead with Ryan Fearn right behind her. Surdell was third with Lavoie right on his back bumper in fourth and Gary Patnode was up to fifth. Steve Midford got into the turn 1 wall to bring the caution back out with 9 laps complete. Bren brought his car down pit road under the caution and was finished for the race.

Ryan Fearn got a good run on the outside of Alexandra Fearn to move into the lead on the restart. Lavoie was working the inside line against Surdell for third and he was able to take the spot on lap-12 with Patnode still holding down fifth.

Alexandra Fearn came back to the inside of Ryan Fearn on lap-13 and took the lead back with a pass in turn 3. Ryan Fearn got into the back bumper of Alexandra Fearn on lap-16 while dueling for the lead with Alexandra coming down pit road. Ryan Fearn was parked for the remainder of the feature by NASCAR Officials, handing the lead over to Lavoie, who was all by himself out front. Lavoie took the checkered flag to pick up his third consecutive win of the 2018 season. Patnode was hounding Surdell for second, but Surdell was able to hold him off at the line for second. Provost finished fourth with Clement rounding out the top-5. 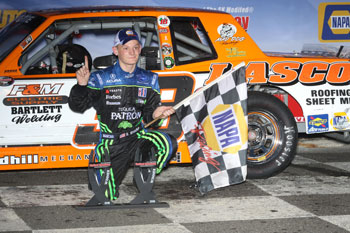 In the 20-lap Street Stock feature event, George Bessette, Jr. took the lead at the green and he immediately began to stretch out his lead. Jason Lafayette was second while the positions were shuffling behind the lead duo with Chris Bagnall working his way into third with Meghan Fuller following in his tire tracks to move into fourth. Travis Hydar was fifth with Nicole Chambrello, Brandon Michael, Mike Hopkins, and Trace Beyer lined up behind him.

At the halfway point, Bessette still enjoyed a comfortable lead over Lafayette with Bagnall and Fuller closing in on Lafayette. Hydar was still in front of the five car train in fifth place with Chambrello, Hopkins, Beyer, and Michael behind him. Samantha Anderson spun in turn4 to bring the caution out with 17 laps complete and set up a 3 lap dash to the finish.