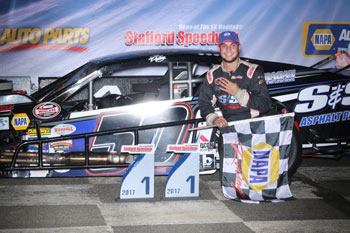 In the 40-lap SK Modified® feature event, Stephen Kopcik took the lead at the green but the field could only complete one lap before the caution came out for spins on the frontstretch by Brendon Bock and Tommy Membrino, Jr. with Austin Pickens and Eric Berndt also involved.

Kopcik again took the lead back under green but not before Michael Gervias, Jr. nearly made it 3-wide with Kopcik and Cam McDermott. Tom Abele, Jr. was fourth and Tyler Hines was fifth with Ronnie Williams and Matt Galko side by side for sixth.

McDermott took the lead from Kopcik on lap-5 with Gervais and Abele now side by side for third and Hines and Galko side by side for fifth. The caution came back out with 6 laps complete for a spin in turn 3.

Back under green, McDermott took the lead but Galko was able to pull alongside and they were side by side with Todd Owen and Kopcik side by side behind them. Hines and Keith Rocco were also side by side, making the front of the field look like a 3 row deep pace lap at race speed. Galko emerged with the lead on lap-9 with Owen taking second. McDermott slotted into third with Hines fourth and Rocco fifth. Kopcik was sixth with Chase Dowling right on his bumper in seventh.

Rocco took third from McDermott on lap-21 and Dowling followed him past to drop McDermott back to fifth in the order as Galko continued to lead Owen. Dowling took third from Rocco on lap-27 while Owen was looking high and low for a way to get around Galko for the race lead.

Dowling continued his charge towards the front as he took second from Owen on lap-33 and was now right behind Galko for the lead. Dowling took the lead from Galko on lap-35 with a pass in turn 2. Owen was third with Rocco in fourth and McDermott in fifth with 5 laps to go.

Once he got out front, Dowling began to pull away from Galko and he scored his division leading fourth win of the 2017 season. Owen finished third with Rocco and McDermott rounding out the top-5. 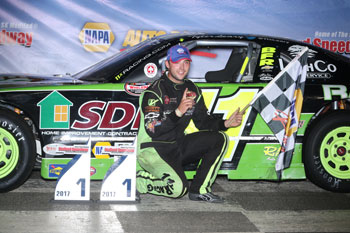 In the 30-lap Late Model feature event, the field took the green and a melee erupted in turn 2 that involved the cars of Josh Wood, Glen Reen, Michael Wray, Tom Fearn, Paul Arute, Rich Hammann, and Kevin Gambacorta that brought the caution out. Fearn came to pit road with an overheating issue, Wood’s team was working on his front end suspension and Mike Quintiliano was penalized to the rear of the field for over aggressive driving by NASCAR Officials.

Michael Wray took the lead on the restart with Reen, Tyler Leary, Michael Bennett, and Matt Vassar making up the top-5. Reen took the lead from Wray on lap-3 and Bennett moved by Leary to move into third on lap-4. Behidn them, Gambacorta had gotten around Vassar to move into fifth.

Reen got loose on lap-10 and lost the lead to Bennett and he fell back to third as Wray moved into second and then Reen spun in turn 2 to bring the caution out with 10 laps complete.

Bennett and Wray were locked in a side by side duel for the lead with Bennett getting clear at the line to take the lead. Wray was second but Reen moved into second on lap-13 with Leary third and Gambacorta got around Wray for fourth place on lap-14. Reen was making a move to the inside of Bennett for the lead on lap-20 when the two cars made contact and Bennett spun to bring the caution out.

Leary took the lead on the restart with Wray slotting into second. Bennett was back to third with Reen already back up to foruth and Gambacorta was in fifth. Bennett made a move for second on lap-24 with Reen following him through and then on lap-25 Reen took second from Bennett as the two cars leaned on each other once again. Bennett used a bump and run to get back by Reen on lap-26 and move into second. Leary was continuing to stretch out his lead with Bennett and Reen fighting for second with Wray in fourth and Gambacorta in fifth.

Reen returned the bump and run on lap-29 and he got back by Bennett to move into second but he was given the black flag to remove him from second. Leary took down his very first Late Model win at Stafford with Bennett, Wray, Gambacorta, and Vassar rounding out the top-5. Reen was penalized back to seventh place, the last car on the lead lap.

In the 20-lap SK Light Modified feature event, Brett Gonyaw quickly took the lead at the drop of the green with Marcello Rufrano right on his bumper in second. Glen Korner was third with Wesley Prucker fourth and Daniel Wesson fifth in the early going. The caution came out with 7 laps complete for a spin in turn 2 that involved the cars of Tony Santangelo, Chris Matthews, and George Nocera, Jr.

Gonyaw took the lead on the restart but he had to contend with Rufrano on his outside. The duo ran side by side for a lap and then it was nearly 3-wide for the lead with Cory DiMatteo sticking his nose in the action before settling back into third. Rufrano took the lead from Gonyaw on the outside groove while Prucker was still fourth and Dan Wesson was fifth.

With 5 laps to go, Rufrano had pulled away by several car lengths from Gonyaw with DiMatteo third, Prucker fourth, and Wesson in fifth. David Arute was applying heavy pressure to Wesson for the fifth spot and he took it on lap-18. Rufrano ran unchallenged to the checkered flag to pick up his first win of the 2017 season. Gonyaw finished second with DiMatteo, Prucker, and Arute rounding out the top-5. 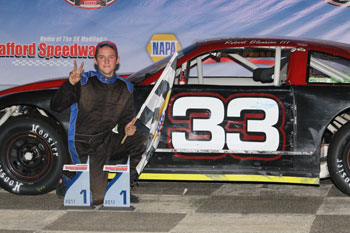 In the 20-lap Limited Late Model feature event, Matt Clement took the lead at the green but the caution came out before a lap could be completed for a spin in the middle of turns 3+4 by Alexandra Fearn. Tyler Trott was sent to the rear of the field for overaggressive driving by NASCAR Officials.

Robert Bloxsom, III took the lead on the restart and took the lead with Clement slotting into second. Duane Provost was third with Bryan Narducci in fourth and Cliff Saunders was fifth. Provost took over second on lap-3 and Narducci and Saunders were now side by side for fourth place. Lavoie got clear of Saunders on lap-6 but he now had Jeremy Lavoie to his inside in a fight for fourth. Narducci took the spot and Lavoie fell back into fifth as Bloxsom continued to lead Provost.

The order remained the same until lap-16 when Lavoie took third from Clement and Al Saunders followed him through to drop Clement back to fifth. Bloxsom was still in command with Provost right on his back bumper. Provost couldn’t get close enough to Bloxsom to make a move for the lead as Bloxsom took down his first win of the 2017 season. Lavoie finished third with Al Saunders and Clement rounding out the top-5. 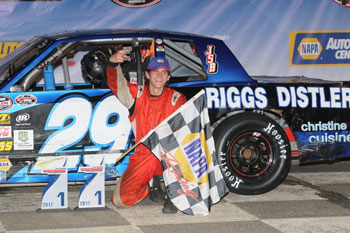 In the 15-lap DARE Stock feature event, Chuck Harrison took the lead at the green and he led the first lap before Chris Bagnall moved to the lead on lap-2. Bagnall’s pass opened the door for Trace Beyer, Johnny Walker, and Zack Robinson to follow him through and drop Harrison back to fifth. Beyer took the lead from Bagnall on lap-3 and Walker followed him into second to drop Bagnall back to third with Robinson right on his bumper in fourth.

Vince Gambacorta took fifth from Harrison on lap-6 as Beyer was starting to slowly stretch out his advantage over Walker at the front of the field. Robinson was still third with Bagnall in fourth. Beyer looked to be on cruise control to NAPA Victory Lane but Richard Ciriello spun in turn 4 to bring the caution out and set up a green-white-checkered finish.

Beyer took the lead on the restart with Walker and Robinson behind him. Walker got loose and slid up the track on the final lap allowing Robinson to move into second but he couldn’t catch Beyer as Beyer took down his second win of the 2017 season. Walker finished third with Gambacorta and Bagnall rounding out the top-5. 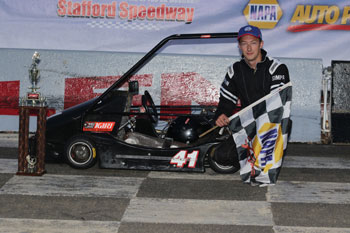 In the 25-lap Senior Champs Wild Thing Karts feature, Max Collins took the early lead with Brian Sullivan right behind him in second. Tim Sullivan was third with Amanda West and Scott Foster, Jr. making up the top-5. Sullivan rode in Collins’ tire tracks until lap -6 when Sullivan moved to the lead. Tim Sullivan followed him through , dropping Collins back to third, but those moves were negated by the caution flag, which came out with 5 laps complete for a spin in turn 3 of the mini mile involving John Aribko, Damon Schuster, and Brandon Tiezi.