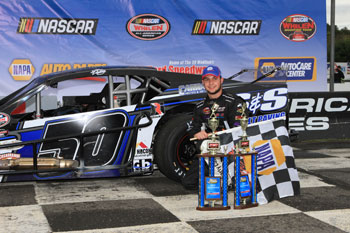 In the 40-lap SK Modified® feature, Ryan Preece used the outside lane to get by polesitter Tyler Hines on the first lap to take the early lead. Ted Christopher quickly moved to the inside of Hines to take over second on lap-2 and Keith Rocco followed in Christopher’s tracks to pull alongside Hines in a fight for third and he took the spot on lap-3. Hines settled into fourth Ronnie Williams fifth before the caution came out with 4 laps complete for Austin Pickens, who came to a stop in turn 2.

Christopher got a great restart and powered his way in front of Preece to take the lead. Rocco and Hines were side by side for third behind Preece with Williams and Chase Dowling side by side for fifth place. Rocco took third with Williams fourth and Pennink moved up to fifth with Hines falling back to sixth on lap-8. Pickens spun in turn 4 to bring the caution back out with 9 laps complete.

Christopher resumed his place at the front of the field on the restart with Rocco moving alongside Preece for second with Williams and Pennink side by side for fourth. Rocco took second on lap-12 and Williams was able to take third as Preece fell back into a duel with Todd Owen for fourth. Bo Gunning spun through the frontstretch infield to bring the caution flag out with 13 laps complete.

Christopher took the lead back under green with Williams now on the inside of Rocco in a fight for second. Behind them Preece and Dowling were side by side for fourth with Pennink and Jeff Baral lined up sixth and seventh place. Williams got clear of Rocco on lap-16 while Preece and Dowling were still side by side as Christopher continued to lead the race.

At the halfway point of the race, Rocco was hounding the back bumper of Christopher for the lead with Williams third, Preece fourth, and Pennink in fifth. Dowling was sixth with Baral, Matt Galko, Todd Owen, and Hines making up the top-10.

With 10 laps to go, it was still Christopher in command followed by Rocco, Williams, Preece, and Pennink. Rocco was looking high and low on Christopher but was now two or three car lengths behind Christopher as the laps continued to click off the scoreboard. Josh Wood brought out the caution out with a plume of smoke from underneath his car with 31 laps complete.

Christopher took the lead on the restart with Williams moving into second. Pennink pulled alongside Rocco in a fight for third but the caution came back out with 32 laps complete for Matt Galko, who took a spin through the backstretch grass.

Christopher again took the lead on the restart with Rocco now on the inside of Williams to retake second. Rocco then made a move to the inside of Christopher for the lead and the two cars touched which set off a chain reaction behind them and collected several cars including Preece, Christopher, Pennink, and Danny Cates.

Rocco was the leader for the restart but Dowling quickly made a move to his inside and took over the lead. Williams was third with Owen fourth and Dan Avery in fifth. The caution came out with 36 laps complete as Owen and Avery spun in the middle of turns 1+2 and collected the car of Baral, which ended on top of Avery’s car to bring the red flag out.

Dowling took the lead on the restart after a lap side by side with Rocco, who fell back to third with Williams moving into second. Tom Abele, Jr. was up to fourth with Bo Gunning in fifth as Dowling took the white flag. Williams made one last bid for the lead but he couldn’t catch Dowling as he took the checkered flag. Eric Berndt spun in turn 1 and Gunning spun in turn 4 on the final lap, making the remainder of the top-5 behind Dowling and Williams Rocco, Christopher, and Abele. 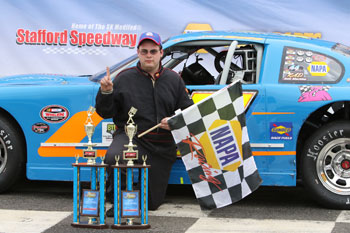 In the 30-lap Late Model feature, Josh Wood powered into the early lead with Kevin Gambacorta in second. The caution came out with 1 lap complete for Paul Arute, who backed into the turn 1 wall.

Wood took the lead on the restart with Michael Bennett moving into second. Bennett took a look to the inside of Wood coming out of turn 4 and they touched but both cars kept going as did the rest of the field. Glen Reen was in third with Tom Fearn and Gambacorta rounding out the top-5. Gambacorta was fifth but he lost that spot to Mike Quintiliano just before the caution came out with 4 laps complete for a spin in turn 2 by Tom Butler.

Wood took the lead on the restart with Reen in second but Butler spun on the restart and lost a lap before the caution came back out with 5 laps complete.

Wood took the lead on the restart but could only complete one lap before the caution came back out for spins in turn 2 by Jim Mavlouganes and Mike Mordino.

Wood took the lead back under green with Reen in second. Bennett was third with Wayne Coury, Jr. in fourth and Michael Wray in fifth. The caution came back out with 10 laps complete as Bennett spun coming through turn 4 and collected Fearn. Coury was black flagged to the rear of the field for over aggressive driving.

Wood took the lead on the restart with Wray getting around Reen to move into second. Quintiliano followed Wray past Reen but Reen came back on lap-13 to retake third. Arute was now recovered to fifth after his lap-1 spin.

Fearn was charging his way back through the field and he took over fifth from Arute on lap-16 as Wood continued to lead the race with Wray, Reen, and Quintiliano in tow.

With 5 laps to go, the order at the front remained the same with Wood continuing to hold down the lead. Wood led Wray to the checkered flag with Reen, Quintiliano, and Fearn rounding out the top-5.