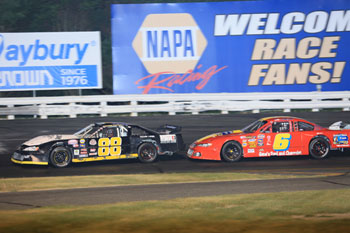 (Stafford Springs, CT)—After winning his first career track championship last season, Palmer, MA native Duane Provost was determined to come back to Stafford Motor Speedway and at least challenge for another title this season. Provost and the #88 Facchini Law Firm team were more than just contenders during the 2017 season as he scored three wins and he finished in the top-5 in 16 out of 17 races this season. But as strong as Provost was this season, a crash in the second race of the year left Provost with a hole to climb out of and doubts about being able to win a second championship.

“I was hoping we were going to be contenders again this season but after the second week we got into the backstretch wall and destroyed the car so I was starting to doubt if we could do this again,” said Provost. “I don’t think I got into the point lead until just the last couple of races. Coming back from that bad finish took a while so it was a long year but we did it. It’s pretty cool. Our circumstances were a lot better this year than last year and the hard driving all year paid off in the end and it’s a great feeling to be champion again. Last year wasn’t the best but this year we had good finishes and we kept the car up there every week and having the most points at the end of the year was pretty solid. I was always hoping that we were going to win it again but it wasn’t until my last win that I really began to think we had a good chance at winning again.” 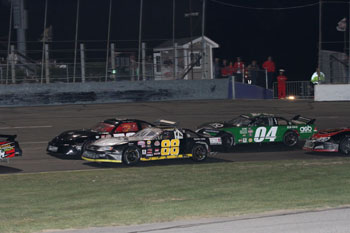 Provost established himself as a championship contender with a second place effort in the season opening NAPA Spring Sizzler but the race 2 crash left him 16 points out of the lead. Provost quickly went about minimizing his points deficit with a second place run followed by 2 consecutive wins in his next three starts after his crash that saw his margin to the point lead shrink from 16 points down to 2 points. Provost then spent much of the summer in a virtual dead heat with Jeremy Lavoie. One week Lavoie would gain 2 points on Provost and then the next week would see Provost gain 2 points back. It wasn’t until the first race of September that Provost was able to take the point lead from Lavoie. Once Provost got into the point lead, he held it through the final 4 races and clinched the championship with a fifth place finish in the NAPA Fall Final feature to win the championship by 6 points over Al Saunders with Lavoie fading back to third, 22 points behind. 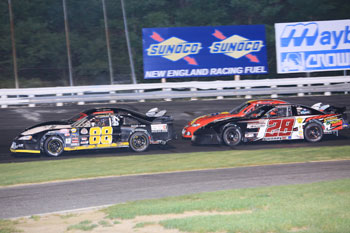 “This year I got my first two races won in a row and now we have two championships in a row, so it’s a pretty cool accomplishment,” said Provost. “It feels pretty good and its a little different circumstances than last season. I worked really hard this year and tried to do everything I could to get up here on the podium every week and finally we’re here celebrating this championship. I have to thank my brother Derek for coming every week and helping me out, Coach Marco at Team Link in Ludlow, Michael Facchini from Facchini Law Firm, Jolly Joe Koziol, Donny at R.A.D. for all the power under the hood, Buzzy for the transmission, Barry Fluckiger for setting the car up all year long and helping me keep the car on the track and straight, New England Racing Fuel Sunoco and Mr. Rooter Plumbing along with 32 Signs for their contingency support throughout the year, NAPA Auto Parts, everyone who makes this thing run, and thanks to all the fans for coming out every week and watching us do this, it means the world to us.”

Provost will officially be recognized as the 2017 Limited Late Model champion at the 48th Annual Stafford Speedway Champions Awards Ceremony to be held on Friday, November 17 at Maneeley’s in South Windsor.