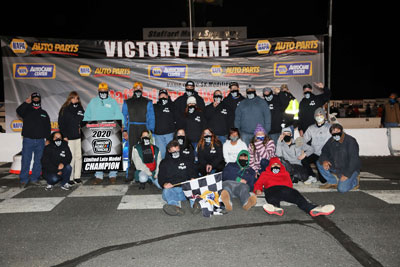 (Stafford Springs, CT)—The race for the Limited Late Model championship at Stafford Speedway came down to the final lap of the final race of the season and ended with Andrew Durand and Alexandra Fearn tied in the standings.  Durand held the tiebreaker over Fearn with 7 wins to Fearn’s 3 wins to make him a track champion for the second time in his career.

Durand entered the 2020 season as the winningest driver in Stafford Limited Late Model history with 25 career wins, even though he hadn’t raced in the division on a weekly basis since the 2010 season.  Despite the nearly 10 year layoff from competition, Durand and the #43 Universal Plastics team resumed their winning ways in 2020 by winning the first 2 races of the season and won 7 races overall on their way to taking home a second career championship.

“I really wasn’t planning on going for a championship this season,” said Durand.  “My plan was to just go race and things kind of fell into line for us with the championship.  After taking so much time off from racing, I really wanted to do the best that I could so we put a lot of extra time and effort into the car.  Towards the end of the season I said to myself that I had to race how I normally race because racing for a championship can stress you out.  My main thing was to just get back out on the track and have some fun and try to win some races.  I have to thank my sponsors Universal Plastics, Hamm’s Welding, Payless Auto Glass, Dan’s Appliances, and a special thanks to Neil Provost for helping get us back out there on the track.” 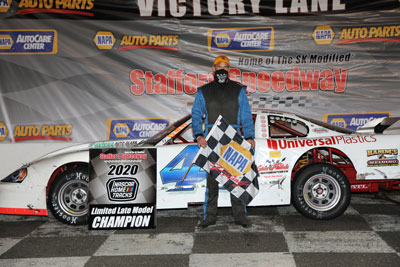 During his first stint in the Limited Late Model division, Durand racked up 25 career wins from the 2005-2010 seasons.  Durand’s 7 wins set a new personal record for wins in a season as his previous career high was 6 back in the inaugural season of Limited Late Model competition in 2005.  Durand returned to Stafford for the final 2 races of the 2019 season to help prepare himself for the 2020 season but mechanical issues plagued him to 11th place finishes in both races and he came into the 2020 season unsure of what to expect from his #43 car.

“I wasn’t expecting to win 7 times but we’ve done it before in 2005 when Michael Bennett won 14 races and we won 6 times,” said Durand.  “We’ve done it before and with a similar amount of cars this year that we had back in 2005, it’s a different kind of racing.  You really have to get to the front before the other guys get up front.  I think it was around halfway through the season that we started to look at points with some potential for the championship at the end of the season but we didn’t think too much about it because there was still a lot of racing left to go and a lot of things can happen to you in that time.  The season went very well for us, I have no complaints.  I guess if I had to complain about something then I’d complain about the night we had a flat tire and we couldn’t finish the race.”

After a nealy 10 year hiatus from racing, it could be easily assumed that the 2020 championship was harder to win than the 2009 championship, but Durand says that wasn’t the case. 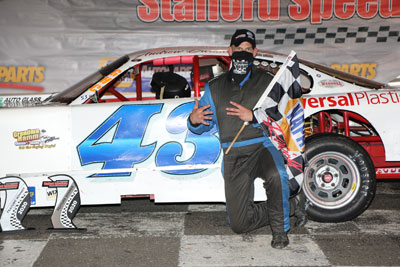 “I think my first championship was a lot more exciting and stressful than this one was,” said Durand.  “I’d say this championship was a lot easier for me stress-wise.  I know how hard it is to win a championship with everyone fighting for it and all it takes is one little thing like a flat tire that can take you out of contention.  You don’t always have to have the fastest car, but you need to be the driver who makes the least amount of mistakes all season long.”

With his second career championship officially in his grasp, Durand is looking to make a move up the full fender ladder at Stafford for the 2021 season.

“It feels good to win the championship this year and now we’re ready to sell my car and build a Late Model for next season,” said Durand.