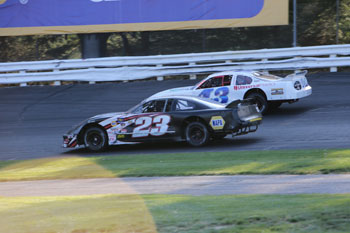 (Stafford Springs, CT)—Stafford Speedway’s Limited Late Model division will see the return of its winningest driver in history during the 2020 season as Chicopee, MA native Andrew Durand comes back to full-time competition. Durand, the driver of the #43 Universal Plastics, ran the final 2 races of the 2019 season, which were his first starts at Stafford since the 2010 season. It was a tribute to a friend that brought Durand back to the track for the first time in nearly 10 years.

“My best friend Neil Provost, who used to race at Stafford, passed away so his passing motivated me to get back to the track and go racing in his memory,” said Durand. “We’ll be taking things one race at a time and we’ll see what we can do but we’re coming to the track to win races. Thanks to Universal Plastics and Joe Hamm for their support and my buddy John, my Dad, and Billy for helping me to put the car back together.” 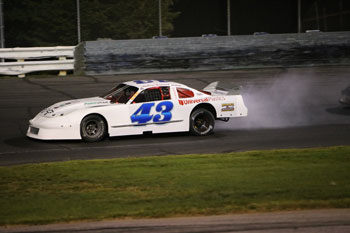 Durand’s two starts in 2019 saw the former track champion struggle with mechanical and tire issues that limited him to 11th place finishes in both of his starts. Durand suffered through a blown rear end in his first start and then 2 flat tires in his second start so he is hoping that he got his bad luck out of the way and he can start fresh in 2020 with the same car he last ran in 2008. Durand was also coming to grips with his car, which had many changes made to it since it last ran in 2008.

“The car is a car that I last ran in 2008 and we put a new front clip and body on the car and it’s got a bunch of new parts and pieces,” said Durand. “We lost the rear end in my first race and then in the second race we had 2 flat tires, so it was tough. We were going out there against people who have ran all year and we were just getting back into it and there’s been a lot of changes on the cars. There’s a different gear rule, we got new shocks, and we had to buy a bunch of other parts to get the car to meet the rules.”

Durand is no stranger to winning races at Stafford. Durand began his Stafford career in 2001 driving in the Street Stock division, where he won 5 races between 2002-2004. In 2005, Durand moved into the newly created Limited Late Model division where racked up 25 feature wins, a total which still stands as the most Limited Late Model feature wins by any driver in the history of the division. Durand also won the track championship in 2009, winning 5 races that season. Durand’s last Stafford victory came on August 20, 2010 but he will be looking to add to his win total in 2020, starting off with the season opening NAPA Spring Sizzler®. Durand won the 2004 Street Stock Sizzler feature and the 2009 Limited Late Model Sizzler feature and he would like to add a third Sizzler win to his resume.

“I’m looking forward to getting back out on the track and seeing if we can do what we used to do back in the day,” said Durand. “You never know what’s going to happen and we’ll be looking to win the Sizzler. In order to win a championship you have to finish races so hopefully we can avoid getting any more flat tires.”

The 2020 Limited Late Model season kicks off with the 49th Annual NAPA Spring Sizzler® on April 24-26. Tickets for the “Greatest Race in the History of Spring” are on sale now by calling the Speedway Box Office 860-684-2783 or online at www.staffordspeedway.com.