Eric Goodale Looking For First Win of 2017 in Stafford 150 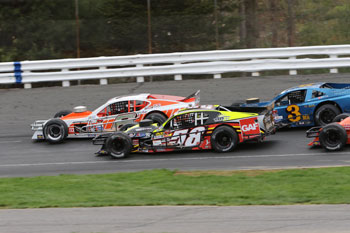 (Stafford Springs, CT)—When the NASCAR Whelen Modified Tour comes to Stafford this Friday, August 4th, one driver eager to pick up a victory is Eric Goodale, driver of the #58 GAF Roofing / Riverhead Building Supply Chevrolet. Goodale comes into the Stafford 150 third in the NWMT points standings and he has posted 4 top-5 and 5 top-10 finishes this season but has yet to reach victory lane. Stafford has been good to Goodale over the past 2 seasons as he has posted 3 top-5 finishes at the Connecticut half-mile in 5 starts and he thinks that he can come out of Stafford with his first win of the 2017 season.

“I’m excited, we’ve had a really fast car at Stafford over the last year or two but we just haven’t been able to put it all together and put a complete race together,” said Goodale. “We’re coming in to Stafford going through a little bit of a slump. We finished 15th our last time out at Loudon and we haven’t had the finishes that we deserve in the open shows that we’ve run. Stafford is a place where we’ve run consistent over the years and we’re looking to get back on track and put ourselves in better position in the championship standings. We’ve been fast all season long and we’ve consistently been a top-5 car regardless if we get a good finish or not. Getting our first win of the season would be huge to get over the hurdle and it would be a big confidence boost for us going forward.” 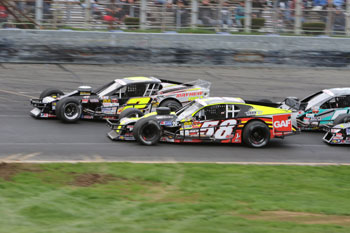 One area that Goodale and the #58 team might have held an advantage over the NWMT field has been negated with the new pit road rules for the Stafford 150, only allowing for one tire change per pit stop. Goodale feels like he has one of, if not the best, teams on pit road but with the new rule in effect, he will have to come up with a strategy move that will get the #58 team up front all while the other 27 teams in the race will be trying different strategies than what they had been used to in prior Stafford races where you could change 3 tires per stop.

“I think we can take advantage of it but the one thing that will hurt is there’s going to be a whole bunch of different strategies being playing out,” said Goodale. “I feel like this year we were able to assemble one of the most talented groups on pit road and when we do a full service stop, we’ve been first off of pit road in a lot of those battles. I can’t say I agree with the one tire rule, but it is what it is and everyone will have to deal with it so hopefully we can make the right strategy call and put ourselves in position to win the race at the end of the night. From our team standpoint, you have the one opportunity to come into the pits and make your adjustments and get back out and we’ve been really consistent on gaining spots on pit road. Now that takes some of this away with the one tire and it evens the playing field across the board, so I think it might hurt us a little more than some other teams. Track position at Stafford is probably more important than any other track we race at on the Tour and I think you’ll see teams with good cars, maybe not winning cars, pull some strategy out of the hat to gain track position and that will throw a wrench into the 7 or 8 cars that are competing for the win.” 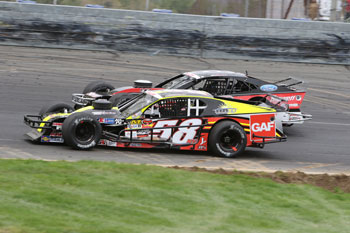 Where the #58 team may be hurt slightly with the new pit rules, Goodale feels like he might benefit from the new group qualifying that will take place for the Stafford 150. Drivers will be grouped into 5 minute qualifying sessions to take as many laps as they need to set a fast time that will determine their starting position. While Goodale hasn’t always been the best qualifier at Stafford, he did qualify third for the NAPA Spring Sizzler® back in April and he thinks that the group qualifying might help him to repeat or even better that third place effort.

“I’m certainly a fan of the group qualifying,” said Goodale. “I was never really a great qualifier and I think the group qualifying helps take some of the pressure off of the driver. Instead of just having two laps that you have to throw down, if you want to run 3 laps, you can run 3 laps or more instead. When we do our mock up qualifying run during practice, I’ve consistently run faster on my third lap so that might help us out to get a good starting spot for the race.”

A good run in the Stafford 150 will also set Goodale down the path to keeping himself and the #58 team in the thick of the championship race. The Stafford 150 kicks off a 5 race in 5 week stretch for the Tour, which is slightly more than half of the remaining 9 races on the 2017 schedule. 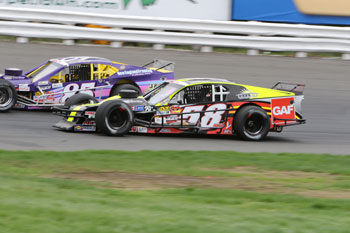 “A good run at Stafford is definitely important,” said Goodale. “We’re coming up on a good stretch for us on the schedule with Stafford, Thompson, and Bristol, so everyone is real excited and it’ll be really important to get off to a good start at Stafford. Consistency will be the key for us, but right now we’re focused on trying to win some races. We’ve been struggling lately with getting finishes that we deserve so our goal first and foremost is try to win the race and if we can’t win then get a top-5 finish.”