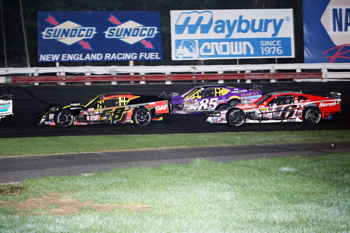 (Stafford Springs, CT)—With the 48th Annual NAPA Spring Sizzler® at Stafford Speedway next up on the NASCAR Whelen Modified Tour schedule, Eric Goodale is looking forward to returning to one of his favorite tracks and maintaining the early season momentum that he and his #58 GAF Roofing team have built. Coming off a podium finish in the last race, Goodale is looking to continue his good fortune at Stafford, where he has a win and 5 top-10 finishes in the last 10 races dating back to 2016 as well as a win in the Bud Light Open 80 last season.

“We had a mechanical failure at South Boston that put us behind but other than that, we’ve been pretty good and we were very happy with a 3rd place finish at Thompson,” said Goodale. “Now we head to Stafford where I like racing and our program is pretty good. We felt like Thompson was one of the tracks where we needed to step our game up the most this year if we wanted to do anything. With the momentum we have from that race, hopefully we can hit the ground running at Stafford and get another good finish for our sponsors GAF Roofing, Riverhead Building Supply, and Complete Chassis Solutions.” 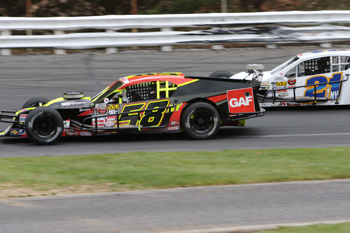 Goodale and the #58 team will come to Stafford with a new Troyer TA3 car that they have run in each of the first three NWMT races this season. The new car has helped Goodale score two top-10 finishes in the first three races of the season, and if not for a mechanical failure at South Boston, the Riverhead, NY native would likely be 3 for 3 in top-10 finishes. With three races under their belt, the team has had ample time to work out any new car blues and Goodale is confident that he will once again be competitive at Stafford.

“We’re bringing our new Troyer TA3 car, which we haven’t raced at Stafford before,” said Goodale. “I like Stafford, it’s a fun track to be at and I really like being able to go fast around the track, and all the guys on the crew love racing at Stafford, so I don’t see any reason why we shouldn’t be competitive. The car is a little different from what we’ve run at Stafford the last couple years and with a new chassis anything can happen but we’re all excited to be coming to Stafford and I think we should be just fine.” 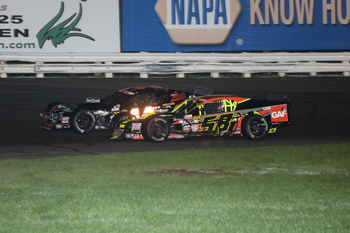 The first step towards another good finish for Goodale at Stafford will be to lay down a lap fast enough in qualifying to get a top-10 starting position. Qualifying has been somewhat of a mixed bag for Goodale and the #58 team at Stafford. In the 14 NWMT races run at Stafford since 2015, Goodale has qualified in the top-10 in half of those starts. But should Goodale have a bad qualifying run, he can always look back to his NAPA Fall Final win in 2017 when he started 18th and found his way to the front in 150 laps.

“A good qualifying lap certainly helps,” said Goodale. “We haven’t been the best qualifiers at Stafford in the past but if you can be in the top-10 to start the race it helps make your pit strategy that much better. When we won the Fall Final a couple years ago, we had a penalty and only got one lap in qualifying and started 18th so it can be done but it’s not the optimal way that you want to go. With a top-10 start you don’t have to race so hard at the beginning of the race and you can sort of pace yourself and set yourself up for different pit strategies that may come into play. When you start back in the pack, you have to make up a lot of track position on your own on the track before you can hone in on a strategy.” 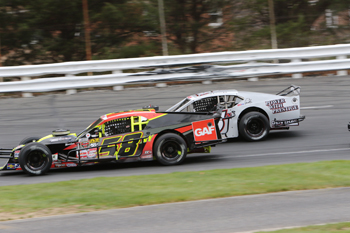 Pit strategy could very well be the determining factor in which driver gets to taste the traditional milk in NAPA Victory Lane. Normally teams could figure on coming to pit road for fresh tires somewhere around the halfway mark of the 200-lap NAPA Spring Sizzler® and racing to the checkered flag. But with the new pit rules allowing only one tire change per pit stop, plus the fact that teams will have to also pit to take on fuel, teams now are faced with a wide variety of strategy options that could either help or hinder their efforts to get to the front of the field.

“The new pit rules have added a whole new angle to the race,” said Goodale. “Normally the strategy would be to come in between lap 100 and lap 130 to take 3 tires but we can’t do that anymore. You have to take on fuel and stop 3 separate times for tires so you have to decide when to pit for tires and how many tires you want to take so it’s a new dynamic. Generally you have an idea of what you want to do but the timing of caution flags can change everything. If your plan was to stop on lap-120 for tires but the caution comes out on lap-105, what do you do? It’s only halfway through the race and Stafford has shown the ability in the past to run 80 to 100 green flag laps in a row and that’s what ended up hurting us at Myrtle Beach.” 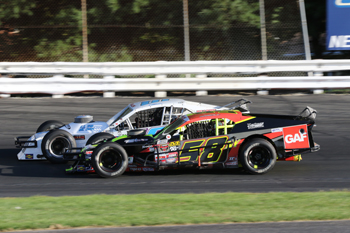 While teams have to decide their pit strategy on the fly during the race, coming down pit road for fresh tires is an area that Goodale is not worried about thanks to his stellar pit crew.

“It’s a lot of fun to come down pit road and give your crew three different opportunities to pick up some spots on pit road,” said Goodale. “I’ll put my crew guys up against anyone on the tour. I know how much faster we can be on a 3-tire stop than other crews so I know how much quicker we can be on a one tire stop than the other crews. Stafford is a track where it’s hard to pass so any time you can pick up a spot or two in the pits is huge.”