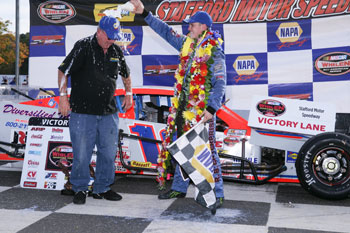 (Stafford Springs, CT)—Stafford Speedway is pleased to name Eric Sanderson, long time car owner and past competitor, as the Grand Marshal of the 47th Annual NAPA Fall Final. The NAPA Fall Final is set for Saturday and Sunday, September 28 & 29 and Sanderson will close out the 2019 Stafford Speedway season with the command to fire engines for the 150 lap event for the NASCAR Whelen Modified Tour.

Sanderson’s racing roots date back to the days of the All-American Sportsman division at Stafford in the early 1970’s. Sanderson got started as a car owner for Warren Bren’s #66 car before taking the wheel himself in the #89 car for the 1972 and 1973 seasons. Sanderson then moved up to Stafford’s modified division behind the wheel of the #43 owned by Ken DePeau in 1974 before stepping down as a driver and becoming a crew member with Everett Manning.

“I got started at Stafford as a car owner for Warren Bren in the All-American Sportsman 6-cylinder division before I drove for a couple of years,” said Sanderson. “I drove a modified for one season in 1974 and I remember the first time I got behind the wheel of the modified I thought, ‘wow, this car is pretty fast’, and then Bugsy Stevens blew by me like I was standing still. Everett Manning was my crew chief for the modified and after I stopped driving I started helping him. We built a Sportsman car for him that became a modified and Everett went on to drive in the SK Modified® division. I had a lot of fun working together with Everett. It’s is a huge honor for me to be the Grand Marshal of the Fall Final and it caught me by surprise when Mark Arute asked me. It’s the first time I’ve ever been asked to give the command and I’m really looking forward to it.” 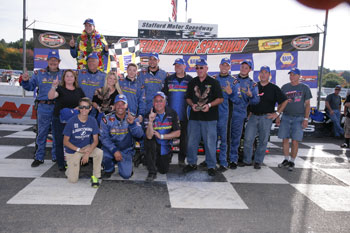 In 1995 Sanderson debuted the #16 NASCAR Whelen Modified Tour car with Chris Kopec behind the wheel. The #16 has since been a staple of the NWMT for over 24 years. Sanderson is a two-time championship winning car owner, taking the NWMT championship with Mike Stefanik in 2006 and Ryan Preece in 2013.

“I was helping Chris Kopec out at Riverside with tires and that’s how we came up with the name Flamingo Motorsports,” said Sanderson. “Chris asked me what I wanted to put on the side of the car and I told him let’s make it Flamingo Motorsports out of Orlando, FL. We had a lot of fun with that, people actually thought we raced flamingos in Orlando. We ran part time on the Tour in 1995 and we’ve been full-time on the Tour since 1996,” said Sanderson. “We’ve had Chris, Rob Summers, Mike Stefanik, Ryan Preece, and now Timmy Solomito driving the car. My best memory in racing was winning our first race with Chris at Holland Speedway in 1999 and then winning our first championship with Mike in 2006. We also won the last Modified Tour race that was held at Martinsville in 2009 with Mike driving the car and I still have that grandfather clock in my office. People have often asked me when I’m going to move up to another division but I love the modifieds and that’s where I want to race.”

“Having Timmy [Solomito] win the race would be the icing on the cake and make the day for me,” said Sanderson. “We’ve won the Fall Final 3 times before with Mike and Ryan and we’d love to make it four wins with Timmy.” 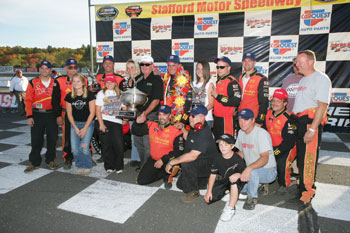 “My father started Sanderson-MacLeod in 1957 and I bought the business after he passed away in 1985,” said Sanderson. “We make all kinds of brushes. Mascara applicators are number one for us but we also do a lot of brushes for medical device cleaners and internal medicine and we also make gun brushes. We started Flamingo Motorsports as Flamingo Racing just to go racing with Chris Kopec and we sold speed parts. We decided we wanted to start to do something for winter so we began to sell snowmobiles and now we’re a full-line dealer selling Kawasaki, Can-Am, Ski-Doo, and Sea-Doo.”

Discount tickets for the NAPA Fall Final Weekend are available at your local participating NAPA Auto Parts Store. The NAPA tickets include general admission for both days along with a lunch buffet on Sunday, all for only $38 per person. For a list of participating NAPA Stores, please CLICK HERE.