(Stafford Springs, CT)—eStafford Speedway is set to host another round of the iRacing Series presented by All Phases Renovations tonight with a 60-lap Late Model feature event.  The first four Friday night events were run with SK Modified® cars while last Friday night saw Street Stocks take to the virtual half-mile. 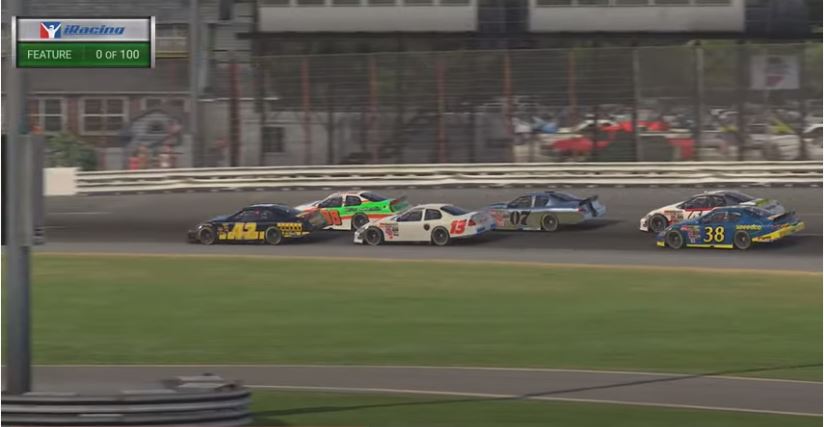 Taking the starring role for Stafford drivers in the LiUNA! 100 were SK Modified® driver Michael Christopher, Jr., who drove a replica of his uncle Ted’s #13 ARCA East Series car to a 4th place finish, Street Stock driver Travis Hydar, who  started deep in the field and drove up to finish 7th, and Stephen Kopcik’s spotter Ryan Blanchard finished behind Hydar in 8th.

“I was going as hard as I could because I knew you could take tires and I felt like I was maybe a little bit better than Parker [Retzlaff], but he could get the power down coming off the corner better than I could,” said Christopher, Jr.  “I thought I was a second or third place car and it was a really stacked field. Bryan [Narducci] and I were on the phone before the race and we were just hoping we could make the field.  The top-6 in qualifying were automatically in the field and we both qualified in the top-5 so we were able to watch the heat races and not worry about that.  The paint scheme was something I made a long time ago and it was pretty fitting for the race. I thought Stafford was a good fit for the ARCA cars and it was different from driving a modified.  The race was a lot of fun and there were a lot of big names in the race.  I wish we could have finished at least third where we started, but I spun the tires on a late restart and we ended up fourth.” 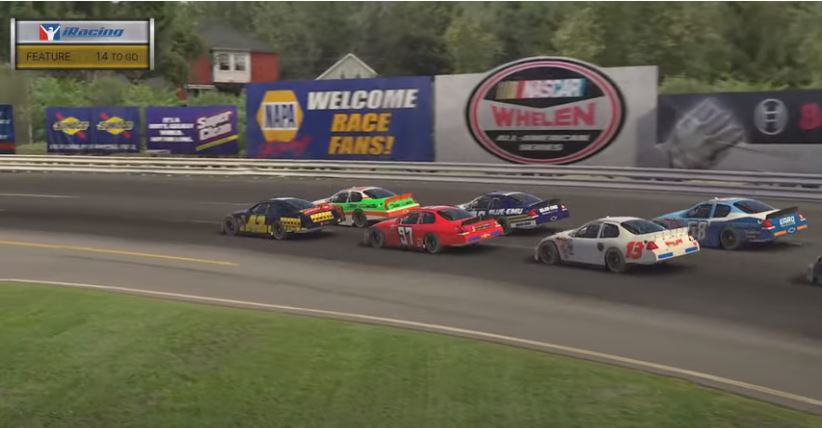 “It was really cool and a great opportunity to run the Grand National race against some of the top tier national drivers,” said Hydar.  “I was pumped when I was able to qualify through the heat race and didn’t have to run the consi.  We took some damage early in the race so I came to pit road and used my one fast repair. Andrew Molleur was spotting for me and helped me avoid the wrecks and navigate our way into the top-10 and finished 7th.  It was pretty cool to see Mike Christopher, Jr. and Ryan Blanchard finish in the top-10 with us.  Those ARCA cars were tough to drive and the tire wear was insane but it was a lot of fun.”

“I think I was the only fan driver that ran the Grand National race and it was really cool to be able to race with Xfinity, Truck, and ARCA guys along with the Stafford regulars,” said Blanchard. “We wrecked on lap-2 and lost 2 laps so we had to overcome that and got both laps back at lap-50.  There was a late caution and I was hoping the leaders were going to pit but they stayed out so I took tires again and was able to get back up to 8th.  I had a good battle with Travis over the final laps and I almost got into him but he was able to hold me off.”

Christopher, Jr. will be in the Late Model race tonight and is looking forward to the Tour Modified race set for next Friday night, May 8.  As an iRacing feature winner back on April 17, Christopher is also locked into the starting field for the Invitational Modified Tour race that is set for May 15th.

“I missed the Street Stock race last week but I’ll be in the Late Model race and I’m really looking forward to the Modified Tour style race, I’ve been asking Stafford for that for a couple weeks,” said Christopher, Jr.  “We won the SK race a couple weeks ago and we won some money from All Phases Renovations so I’m hoping we can win some more money.  It’s pretty cool Stafford has brought some different style races and the Late Model and Tour races should be pretty good and I’m sure the competition will be tight.”

Hydar will be looking to continue his good fortune in the iRacing realm where he has posted two podium finishes in the SK Modified® races held at eStafford as well as finishing fourth in last Friday night’s Street Stock race and 7th in the Grand National race.

“I was really surprised how well I’ve run in the SK races because I wasn’t sure how quickly I could adapt,” said Hydar.  “The street stock race was a little more up my alley with full fender cars and it was pretty cool to be able to run that race against guys who race modifieds as well as full fender guys. I’m planning on running the next 2 Stafford races and I’m really looking forward to another full fender race with the Late Models.” 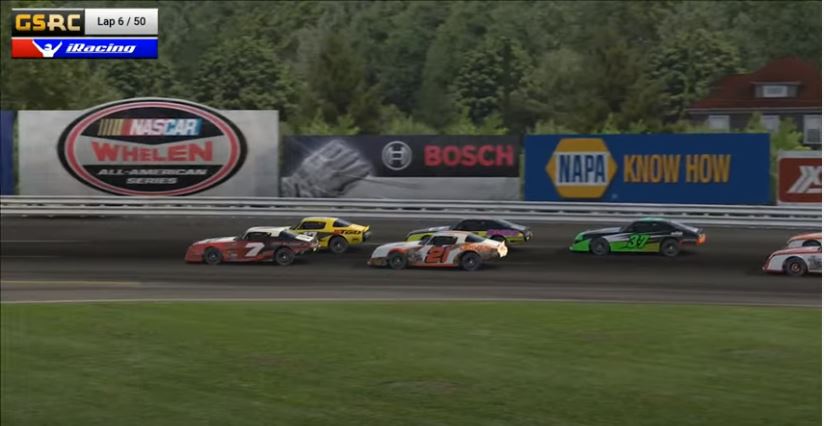 Souza made his eStafford Speedway debut in last Friday night’s Street Stock feature event by leading all 50-laps to take the checkered flag.  Souza had to qualify for the Street Stock race through a preliminary Wednesday night event presented by The Horton Group, but now that he is a feature winner, he is automatically qualified for Friday night racing and will no longer have to go through the Wednesday night qualifiers.

“It was good but it was pretty stressful,” said Souza.  “I had a little bit of everything working for me in that race with good track position starting on the pole and I knew how to drive the car, but it was still tough having to hold off a guy like Andrew Molleur who races every week at Stafford and knows where to get on and off the gas and where to turn into the corners.  I’ve got over 200 iRacing wins but I would rate that Street Stock race as my top win.  Now that we’ve won we don’t have to qualify through Wednesday nights anymore and I’m looking forward to racing in whatever races Stafford has left to offer.  The Late Model and Tour Modified races are going to be tough but it’s a great way to be able to get together with other guys and have some fun on a Friday night.  I have to thank All Phases Renovations because we’d be racing for nothing without their support.  That Street Stock race was the first time I’ve ever collected a decent sum of money on iRacing.  I’ve won $10 or $15 here and there but nothing like $150 so thanks to All Phases for putting that money up for us.  Having some money like that to race for definitely makes the racing more interesting and I’m looking forward to the next 2 Stafford races.”

Perhaps the surprise of the group has been the performance of Blanchard.  Blanchard has only run 2 of the 4 SK Modified® races held at eStafford but he won the Horton Group preliminary events for both of his starts and he finished 2nd and 3rd in the SK races.  Blanchard didn’t qualify for the Street Stock race after getting involved in an incident during his qualifying race but his strong efforts so far have him looking forward to the upcoming eStafford events.

“I’ve been iRacing for the last 3 or 4 years and my buddies Brandon Wilkinson, Teddy Hodgdon, Travis Hydar, and Andrew Molleur have all taught me the speed secrets around Stafford and having that driver input really helps,” said Blanchard.  “I’m really excited for the next 2 Stafford races.  I’m not as excited for the Late Model race as I am for the Tour Modified race but I think they’re both going to be very good races.”

Blanchard is not only active as a driver in iRacing, he also provides paint schemes for drivers.  Ryan can be contacted through his Facebook page or email at ryanblanchard12@gmail.com if drivers would like to get a new iRacing paint scheme.

“I got started with schemes a couple years ago when Jon Puleo asked me to design his SK Light scheme for his rookie season at Waterford where he won the championship,” continued Blanchard.  “That transferred over to iRacing and Travis Hydar, George Bessette, Jr., Teddy Hodgdon, Andrew Molleur, and Jon are always asking me for schemes and it’s always pretty cool when you see a scheme you designed on an iRacing broadcast and it’s even cooler when I’m racing against my schemes.”

The next round of the eStafford Speedway iRacing Series Presented by All Phases Renovations kicks off tonight at 7pm with Late Model cars taking center stage.  Modified Tour cars will be in action next Friday, May 8 and the Invitational Tour Modified race is set for May 15.  Be sure to tune to Stafford Speedway’s YouTube channel to watch all the action.