Posted on June 6, 2019 by Scott Running Posted in News 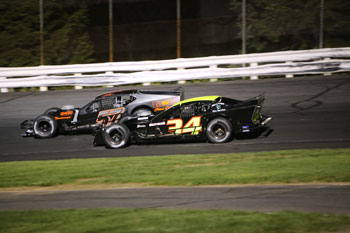 (Stafford Springs, CT)—Open Modifieds return to Stafford Speedway on Friday, June 14 for the Twisted Tea Open Mod 80 and Portland, CT native Dave Etheridge will be looking to record another top-10 finish. In 11 VMRS or Open Mod starts at Stafford dating back to Sept. 2015, Etheridge has piloted his #34 Warner Turf Equipment / Belltown Tire machine to 6 top-5 and 10 top-10 finishes. Etheridge finished 6th in the May 24 Open Mod 80 at Stafford and with a little tweaking on his #34 car, he is looking for another good run.

“The car was good, but we were off just a little bit,” said Etheridge of his May performance. “We’ve been working on the car these last couple weeks and we think we found the problem so we hope we can come back even stronger than we were. The car was good on new tires but when we changed tires, they just didn’t seem to match up. We’re usually pretty good when we come to Stafford so we’ll be looking to have a better run.” 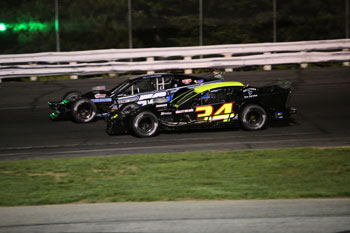 The 2018 Open Mod 80’s were won by Tommy Barrett, Jr. and Eric Goodale, but the May race saw Stafford SK Modified® regulars sweep the podium positions with Keith Rocco leading Todd Owen and Matt Galko to the checkered flag. 5 of the top 10 finishers were SK Modified® regulars and having to overcome their local track knowledge in order to run up front puts drivers like Etheridge at a disadvantage.

“[SK Modified® regulars] definitely have an advantage racing there every week,” said Etheridge. “Knowing how the track changes with the weather and temperature is a huge advantage. We just have to roll with it and make the best of it. We pick and choose where and when we’re going to race the car and there’s not much we can do about guys having local track knowledge. The track isn’t going to change very much from the last race to a couple weeks from now so I don’t think we have to make big changes to the car, which is a positive for us.” 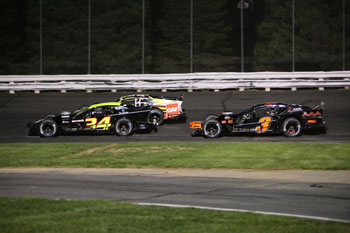 While Etheridge may not have the track knowledge that some of the SK Modified® regulars might possess, he comes to Stafford with a 2-car attack with Anthony Flannery piloting Etheridge’s #25 Leonard’s of Stafford Springs machine. With 2 cars to work with, Etheridge and Flannery can try different things with their car setup during practice and see what will work best for them to help overcome some of the SK Modified® drivers.

“Between Anthony’s guys and my guys, we all work together and his guys have a few different ideas that they like to try and I give them free reign to try something different,” said Etheridge. “I’m all about trying different things and it’s good to show up to the track where I have one setup in my car and Anthony has a different setup in his car and if one works better than the other, we’ll make a change. We get two rounds of practice at Stafford which for us is like four rounds between the two cars and we can compare notes and see what is working better.”

Etheridge was a Stafford regular in years past competing in the ProStock division. Etheridge notched one win each season from 1993-1997 in the ProStock ranks and he would like to add a modified win to that total. 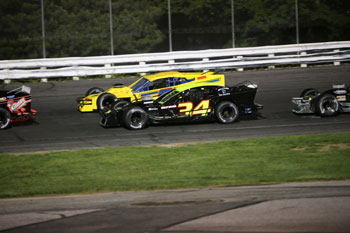 “To win the race you’re going to need a good handling car and maybe try something a little off the wall with strategy to do something different from what everyone else is doing,” said Etheridge. “Pit road can be tough with some of the guys having real fast pit crews so we might have to do something where we can get ahead of those guys on pit road to get track position. We could do a one tire stop, we could short pit, there’s a couple different options we can go with. A win in the Open 80 would be huge for us and our sponsors Belltown Tire, Warner Turf Equipment, Performance Engines, SPAFCO Race Chassis. Stafford is the premier track around and if you win at Stafford, you really have something going on.”

Stafford’s five NASCAR Whelen All-American Series divisions will join the Open Modifieds in feature action on June 14. Tickets for the June 14 Twisted Tea Open Mod 80 are $30.00 for adults, $5.00 for kids 6-14, and as always 5 & under free. Reserved seating is priced at $32.00 for all ages. All tickets include 10% CT Admission Tax. General admission gates open at 5:15pm, with qualifying races beginning at 6:15pm and feature races to follow. Open Modified teams can still register for the June 14 Twisted Tea Open 80 as well as the July 12 Bud Light Open 80 by contacting the speedway office or completing the online form found in the TEAMS section of www.staffordspeedway.com.