(Stafford Springs, CT)—Stafford Motor Speedway kicked off its final race event of the 2018 season with feature events for its Limited Late Model, and Street Stock divisions, as well as a feature event for the Vintage All-Stars and the special Ladies Challenge feature that raised over $35,000 for various charities as part of the Saturday NAPA Auto Parts Fall Final Weekend festivities. Taking feature wins were Ryan Fearn in the Limited Late Model feature, George Bessette, Jr. in the Street Stock feature, Scott Dion in the Vintage All-Stars feature, and Debbie DeSanctis in the Ladies Challenge feature. 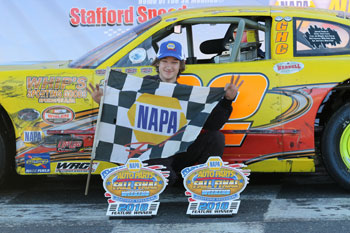 In the 20-lap Limited Late Model feature, Justin Bren took the early lead with Robert Bloxsom, III right behind him but the caution came out with 2 laps complete for debris on the frontstretch.

Back under green Bren took the lead with Ryan Fearn moving into second. Bloxsom dropped back to third in line with Jeremy Lavoie in fourth and Alexandra Fearn in fifth. Ryan Fearn took the lead from Bren on lap-5. Just as Fearn took the lead, Bren tried a crossover move in turn 2 and made slight contact with Fearn, but Fearn was able to maintain control of his car and stayed in the lead.

Lavoie was applying heavy pressure to Bloxsom for third but Bloxsom was able to hold off his challenge. Lavoie was able to make the move for third on lap-15 and he brought Alexandra Fearn with him into fourth as Bloxsom dropped back to fifth with Ryan Fearn still leading Bren at the front of the pack.

Fearn led Bren to the checkered flag to pick up his sixth win of the 2018 season. Bren finished second with Lavoie, Alexandra Fearn, and Bloxsom rounding out the top-5. 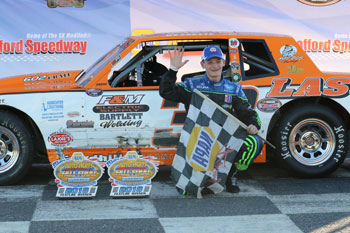 In the 20-lap Street Stock feature, Samantha Anderson took the early lead at the drop of the green flag with Chuck Harrison second. Jason Lafayette was third with Nicole Chambrello quickly moving up to fourth and Johnny Walker following right behind her in fifth. Right behind Walker was Tess Beyer in sixth and George Bessette, Jr. in seventh.

Beyer got by Walker to move into fifth on lap-8 while Lafayette got around Harrison to move into second as Anderson continued to hold the race lead. Harrison slid back to seventh in line as the order was now Anderson, Lafayette, Chambrello, Beyer, Walker, Bessette and Harrison with 10 laps complete.

Chambrello’s car dropped off the pace and she limped back to pit road on lap-13 while Lafayette took the lead from Anderson. Beyer followed in Lafayette’s tire tracks to move into second with Walker fourth and Bessette fifth.

Beyer got around Lafayette to take the lead on lap-17 and the caution came out with 19 laps complete for a spin in the middle of turns 3+4 by William DesJardins to set up a green white checkered finish.

Beyer took the lead on the restart with Bessette nearly making a move for the lead. The two cars raced side by side into turns 3+4 and as they headed towards the white flag, Beyer spun and collected the car of Lafayette. The race stayed green and Bessette led the field to the checkered flag to pick up his fifth win of the 2018 season and put an exclamation point on his championship winning season. Mike Hopkins finished second with Meg Fuller edging out Travis Hydar by a nose for fourth place and Walker rounded out the top-5. 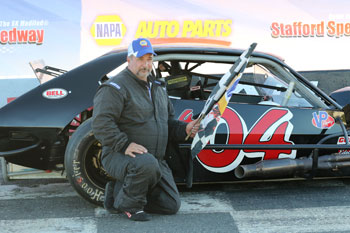 In the 15-lap Vintage All-Stars feature, Scott Dion took the lead at the green with Gregg Massini in second and Jeff Hummel in third. Jocelyn Laliberte was fourth and Glenn Gagner was fifth in the early stages. Gagner spun on the frontstretch to bring the caution out with 4 laps complete. 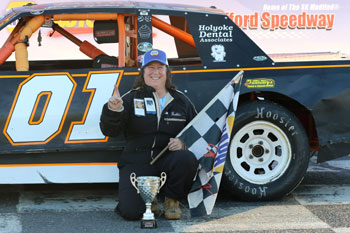 In the 8-lap Ladies Challenge feature event, Debbie DeSanctis took the lead from Nicole LaRose on the opening lap with Lianna Berndt slotting into third. Berndt made a power move to the inside of LaRose on lap-4 but couldn’t complete the pass with DeSanctis still out front. Maina Rufrano was fourth with Gail McClain in fifth. Berndt spun on the backstretch to bring the caution out with 5 laps complete.

DeSanctis took the lead on the restart with LaRose in second. Rufrano was third in line with McClain up to fourth and Cassie Rocco in fifth. DeSanctis led LaRose to the checkered flag to score the win. Rufrano finished third with McClain fourth and Rocco fifth.