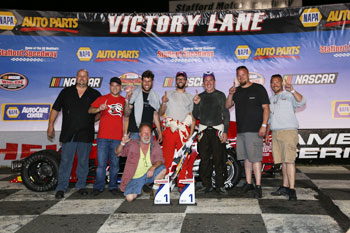 (Stafford Springs, CT)—If at first you don’t succeed, try, try again is a mantra that could be easily applied to George Nocera, Jr.’s efforts this season in Stafford Speedway’s SK Light division. Nocera was one of the top dogs in the Limited Late Model division, finishing second to Kevin Gambacorta by only 2 points in the race for the 2006 championship. From there, Nocera moved with car owner Gary Bienkowski into the SK Light division where he raced in 2007 and 2008 before moving into the Late Model division in 2013. Nocera’s previous best finish in the SK Lights was third place but that all changed this past Friday night when he put his #38 Allstate Fire Equipment machine owned by Ted Christopher into NAPA Victory Lane.

“It’s honestly an amazing feeling, especially having Ted Christopher and his crew helping us out,” said Nocera. “It was about 10 years ago now I tried a season and a half of SK Light racing and we tried to get a win but we were never able to get one. It’s such a great feeling to have people behind you that know what they’re doing and to be able to get back out there and run up front right from the get go. Honestly I thought it was going to take a little longer than it did for us to win a race. It’s still all a little surreal to me because I had no intentions of being able to run up front right away, especially with the large car count that we have right now. I have to thank Allstate Fire Equipment, Waste Material, M&T Enterprises, and T/A Engines for all of their support this season.” 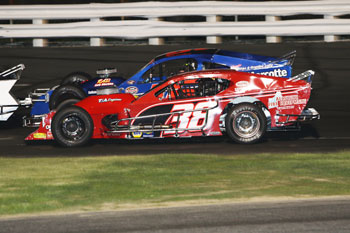 Nocera returned to Stafford in 2013 with Bienkowski in the Late Model division but in 2 seasons of competition, he had only 4 top-10 finishes with a best effort of 8th. Following Bienkowski selling the car, Nocera wasn’t sure he would ever return to racing. But in working for Ted Christopher at M&T Enterprises for his full-time job, Nocera found an avenue that led to him not only being back behind the wheel, but winning races again.

“After Gary sold the Late Model, I thought I was done racing completely,” said Nocera. “I know I would’ve helped Teddy out with his car here and there and when I came back to work for Ted, there’s cars just sitting around and I sat down with Ted and put together a deal to get back out on the track. As soon as I got back racing again, Gary and Jeff came back to help me out with things so it’s a pretty good deal right now. It’s kind of like we got the band back together again. A lot of guys on the crew are gung ho about where we are in the points but I’m just thinking about how we can win more races and not even thinking about points right now. There’s 18 races to go and anything can happen. I think we have a really stout car and there’s no reason why we can’t be back in victory lane again this year.”

The next challenge for Nocera will be the 40-lap Dunleavy’s Modifiedz Night feature on Friday night, June 9th. While Nocera isn’t used to the longer distance races, he has all the confidence in the world that his #38 will be ready to contend for another victory. 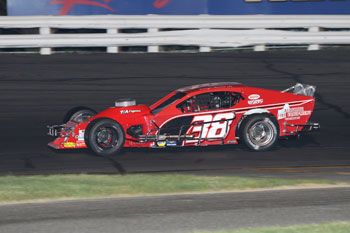 “I’m not really used to the longer laps, I think the longest race I’ve ever done is a 50-lapper in the Late Model,” said Nocera. “I just have to keep my stamina up and save the car, I can’t beat the heck out of it in the first 10 laps. We’re hoping to get a good starting position, save the car for the second half of the race, and then run the car hard in the second half. These guys at Teddy’s shop have been doing this for a long time and they’re used to running 40-laps so they know what’s going on.”

The victory in the May 19th SK Light feature has also given Nocera a new perspective on what to expect going forward in 2017.

“The win has changed everything,” said Nocera. “I’m a lot more confident now and more comfortable in the car. I know we’ll be up front this Friday and the rest of the season. I thought it was going to be a little rough this season with all the new guys that are in the division, but it’s actually turned out to be some pretty good competitive racing and it must be an enjoyment for the fans to watch.” 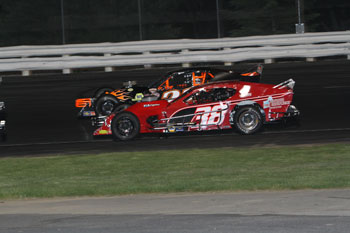 The SK Lights, along with the four NASCAR Whelen All-American Series divisions will take to the track on Friday, June 19th with qualifying beginning at 6:15pm. Tickets for this event are on sale now and are priced at $20.00 for adult general admission tickets, $5.00 for children ages 6-14, and children ages 5 and under are admitted free of charge when accompanied by an adult. Reserved seat tickets are $23.00 for all ages. June 19th is also Military Appreciation Night and anyone who shows a valid military I.D. at the gates will receive a general admission ticket for only $10. All ticket prices include 10% CT Admission Tax. Stafford Motor Speedway offers plenty of free parking along with overnight parking available for self contained Recreational Vehicles. As part of the Dunleavy’s Modifiedz Night festivities there will be a fireworks presentation at the conclusion of feature racing.