Former SK Light Champion Michael Gervais, Jr. Off To A Hot Start in 2018 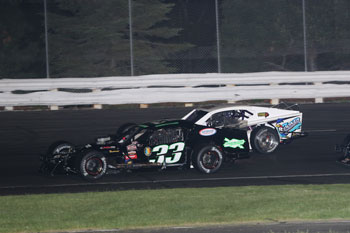 (Stafford Springs, CT)— The 2018 season has given Stafford SK Modified® driver Michael Gervais, Jr. many reasons to smile. Gervais, driver of the #33 Gervais Brothers Roofing Chevrolet owned by Keith Rocco, is off to great start with top-5 finishes in 5 of the first 7 races of the 2018 season to go along with finishes of 7th and 11th in his other two starts. Gervais and the #33 team is currently third in the SK Modified® points standings and thanks to a 4-race stint in the #33 car to close out the 2017 season, Gervais is right where he hoped to be this year.

“At the end of 2017 we ran 4 races in Keith’s car and we were good so I definitely had a good feeling going into this year,” said Gervais. “It definitely shows because we’ve had one of the best starts to a season that we’ve had in quite a while. I expected us to be up front mostly every week from what I felt in the car from those 4 races last year. I think maybe we’ve exceeded our expectations a little because you don’t expect to be in the top-5 every week but when you do, I’ll take top-5 finishes all day long. I try to not see the points but it’s hard to not know where you are at this point of the season. It’s definitely the best start we’ve had to a season and it’s a good feeling to know we’re close to the top instead of having to work our way up to the top. We just need to keep on doing what we’ve been doing.”

Now in his 9th full season of SK Modified® competition, Gervais is looking to add to his career SK Modified® win total of 4. With an average finish of 5.7 through the first 7 races this season, Gervais and crew are closing in on their first win together with the #33 car. 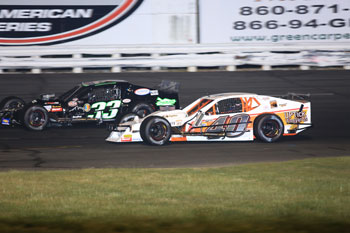 “I feel like we’re pretty close, it’s just a matter of having a little extra luck on our side but we definitely have the car to win a race,” said Gervais.

What better race to score your first win of the season in than the upcoming 5th Annual NAPA Auto Parts SK 5k on June 29. The extra distance 100-lap race will guarantee the winner $5,000 from a purse of over $27,000 with even more money up for grabs thanks to the Gambler’s Challenge presented by Dunleavy’s Truck & Trailer Repair. SK Modified® drivers put $100 into a pot that is matched by Dunleavy and then the winner will pick out of a hat in NAPA Victory Lane to determine if the bonus, which has reached over $5,000 for the past 3 seasons, will be paid out to the winner or split evenly among the top-5, 6th through 10th place finishers, or 11th through 20th place.

“I’m definitely excited for the NAPA SK 5k especially with how good the car has been,” said Gervais. “I’m curious to see how good it will be in the long distance race but I don’t see why it would be too much different from a normal race. Having the confidence that we’ll have a good car going into that race will be a plus. For our first win with the 33 car, this would be the race to get that win in. A win would be huge for all of us on the team as well as for Keith as the car owner I’m sure. Doug Dunleavy is definitely a gift to modified racing. He loves the modifieds and it’s great that he has that passion and is willing to give us drivers something extra to race for in addition to what’s already on the table thanks to NAPA.”

With 5 top-5 finishes already to his credit in 2018, Gervais is well on his way to equaling and surpassing his career high for top-5 finishes in a season of 7, which he set back in 2013. The 2013 season was Gervais’ best season to date in the SK Modified® division, as he scored 2 wins and ended the season third in the points standings. Gervais credits working with Rocco as one of the reasons why he’s been able to find the level of success that he has reached thus far in 2018. 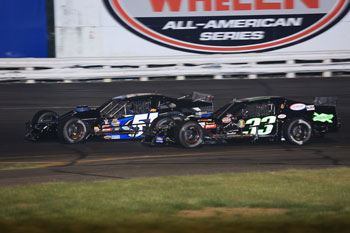 “Really it’s been awesome,” said Gervais. “Keith knows a lot and it seems like every time we talk about how the car was after a practice or a heat race, we always seem to have the same ideas. I think it’s easier talking with another driver about what the car is doing because they’ve just been in the same situation as you behind the wheel. In the SK Lights we never won a race but we were very consistent. I think we only had 1 DNF that year as well and in my second year in SK Modifieds® we ended up third in points when I won two races and this season kind of reminds me of that season as well as our championship season. This year has been a 10 out of 10 for us so far and that’s thanks to all of our supporters; Gervais Brothers Roofing, Long Island Performance, Arbitell Convenience Stores, Island Coffee, Baybrook Remodelers, and Stafford Pools.”

The 5th annual NAPA Auto Parts SK 5K is set for Friday, June 29. With $5,000 guaranteed to win and over $30,000 in posted awards, the 100-lap big money race will be an event not to miss. Discount tickets for the NAPA SK 5k are available at participating NAPA Auto Parts stores. For a full list of the 72 participating locations throughout Connecticut, Massachusetts, New York, Rhode Island, and Vermont, please call the speedway office or visit us on the web at www.staffordmotorspeedway.com/participating-napa-auto-parts-stores. Tickets for the NAPA SK 5K are available and on sale now at the Speedway Box Office. Tickets are priced at $30.00 for adult general admission tickets, $5.00 for kids ages 6-14, and kids 5 and under are admitted free of charge when accompanied by an adult. Reserved seating is priced at $32.00 for all ages. All ticket prices include 10% CT Admission Tax. Stafford Speedway offers free parking with free overnight parking for self-contained RV’s available. There will also be a barbeque taking place on the midway with some great food available to race fans for only $10.

For more information on the June 29th NAPA Auto Parts SK 5K, or to order tickets, contact the Stafford Motor Speedway track office at 860-684-2783 or visit us on the web at www.staffordspeedway.com.