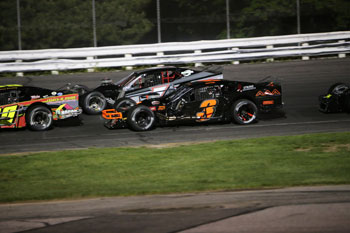 (Stafford Springs, CT)—Fresh off of a third place finish in the May 24 Open Mod 80 at Stafford, Matt Galko is looking forward to the June 14 Twisted Tea Open Mod 80 and feeling good about his chances of putting his #3 AAA Consulting machine in NAPA Victory Lane. While Galko and his family have always owned his SK Light and SK Modified® cars throughout his career, the May 24 Open Mod 80 was Galko’s debut as a driver/owner of a Tour-type modified car after having made a handful of starts over the past several seasons for the Norm Perry owned #76 team.

“That was the first race where I’ve driven a Tour style modified that we owned and with all the early season rain, it was actually the debut of the car on the track this season,” said Galko. “Overall it was fantastic. You can’t complain too much with a third place finish. I’m very confident in our ability to get the job done, but I don’t want to get too overconfident because we still have to race against the best guys in the business. I’m expecting everyone else to step up their game and be even more competitive. We’re working hard in the shop on our car and hopefully we can progress a little more than everyone else. Our goal originally was to get a podium finish and we got that done in our first race so now our goal is to try to get a win. We’re going into this race with a little higher expectations and it would be great to be able to take home some Twisted Tea’s at the end of the night.”

Even though the May 24 Open Mod 80 was the debut race for Galko’s tour-type #3 machine, the car showed the speed of a seasoned veteran and car combination. Galko dominated his qualifying heat race, leading all 10 laps after starting from pole position. With a +/- rating used to determine the feature starting lineup, Galko began the 80 lap race from 11th and was up to fourth before a slow pit stop dropped him back to 10th in the running order, meaning Galko twice drove through half the field in order to secure his podium effort.

“We started 11th and got up to fourth when the pit stops came around but we made a couple mistakes on pit road and then I stalled the car leaving, so we fell back to around 10th and had to come back through the field again,” said Galko. “By the time we got back up to third place, Keith [Rocco] and Todd [Owen] had built up such a lead that we ran out of laps. I think my car was equal to or if not better than those guys and I was hoping for a late caution because I think we might have had something for those guys. We came up a little short of the win but we were very happy with a third place finish. Stash Butova helped us out setting the car up and making the calls. It was beneficial to have a guy like that to bounce ideas off of and rely on to make the calls. All I had to do was focus on driving the car.” 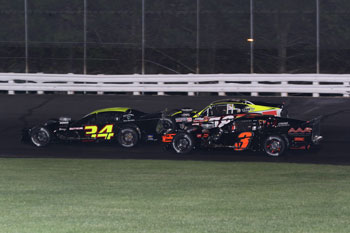 While some teams came to the Open Mod 80 with seasoned pit crews, Galko’s crew was made up of family and friends who were all volunteering their time to help Galko out. With a little tweaking on the car and some improvements getting on and off pit road, Galko feels like he can once again be a threat to win the Twisted Tea Open Mod 80.

“It’s tough to compete on pit road with teams like the Goodale’s,” said Galko. “I had a bunch of friends volunteering on the pit crew with no previous practice. We kind of got together before the race and put a game plan together on who was going to do what. I made a couple mistakes like rotating a tire on the guys while they were changing so that messed them up a little and I stalled the car, so there’s a lot of improvement I can make as the driver on pit road and now that the guys have some experience, I think we’ll be better. I have to thank all my sponsors J.M. Rose Lawn Care, Fazzino’s Auto Parts, NAPA Auto Parts, AAA Consulting, Casa Rosa Landscaping, John Digger, DMW Graphics, A & R Auto Body, Pettit for the awesome power, Troyer Race Cars, and all my friends and family who come out to support me. We found out very quickly that supporting two cars is a lot more work than just one so it helps to be surrounded by good people. I couldn’t do this without everyone’s help and support.” 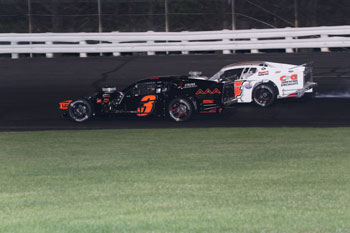 Stafford’s five NASCAR Whelen All-American Series divisions will join the Open Modifieds in feature action on June 14. Tickets for the June 14 Twisted Tea Open Mod 80 are $30.00 for adults, $5.00 for kids 6-14, and as always 5 & under free. Reserved seating is priced at $32.00 for all ages. All tickets include 10% CT Admission Tax. General admission gates open at 5:15pm, with qualifying races beginning at 6:15pm and feature races to follow. Open Modified teams can still register for the June 14 Twisted Tea Open 80 as well as the July 12 Bud Light Open 80 by contacting the speedway office or completing the online form found in the TEAMS section of www.staffordspeedway.com.