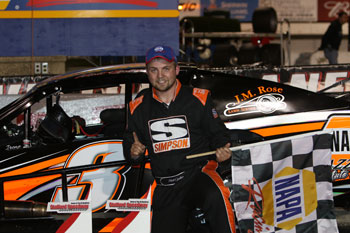 In the 40-lap SK Modified® feature event, Dan Avery took the lead at the green and he led the first lap before a melee broke out in turn 2 when Tony Membrino, Jr. spun in turn 2 in front of the entire field. Nearly two-thirds of the field were involved in a pileup and brought the caution out.

Avery took the lead back under green with Matt Galko hounding him for the race lead while he was side by side with Cam McDermott for second. Mike Christopher, Jr. was fourth and Glen Reen was fifth. Galko finally got by McDermott and he took the lead from Avery on lap-5. McDermott followed Galko by Avery and Christopher, Jr. took third from Avery on lap-8. Reen was now side by side with Chase Dowling for fifth with Dowling taking the spot on the outside on lap-9.

On lap-12 Ryan Preece went around Dowling in the outside groove to move into fifth place as Galko continued to hold the lead with McDermott, Christopher, Jr., and Avery lined up behind him. The caution came out with 13 laps complete as Josh Wood’s car was smoking heavily and came to a stop at the exit of pit road.

Galko took the lead again with McDermott, Avery, Dowling, and Christopher, Jr. lined up behind him. The caution came back out with 14 laps complete for Tommy Membrino, Jr., whose car came to a stop at the entrance to pit road.

Galko took the lead on the restart with McDermott holding onto second. Dowling was third with Avery and Preece side by side for fourth. Preece took the spot from Avery on lap-18 after the two cars crossed over and Preece was now on the inside of Avery. Ronnie Williams tried to follow Preece by Avery but he settled back into line in sixth.

Dowling was continuing to charge his way towards the front as he took second from McDermott and his move opened the door for Preece to follow him through as McDermott fell back to fourth. With 10 laps to go, Dowling had caught up to Galko and he began working him over for a way to take the lead. That pass materialized on lap-33 as Dowling went to the lead in turns 1+2. Preece was third with McDermott and Williams making up the top-5. The caution came out with 35 laps complete for McDermott, who spun in turn 4.

The race restarted with Galko making a power move to the inside of Dowling in turn 3 to pull alongside in a duel for the lead. The two cars ran side by side lap after lap with neither driver giving an inch. The caution came out with 38 laps complete for Christopher, Jr., who got sideways in turn 4 and kicked up debris on the track.

Galko took the lead on the restart but Dowling was still on his outside and they took the white flag side by side. Preece was right on the leaders’ bumpers if one of them slipped up but Galko was able to get a slightly better run coming out of the last corner and he beat Dowling to the checkered flag by a half car length to pick up his first career SK Modified® feature victory in his fifth season in the division. Preece finished third with Williams and Rowan Pennink rounding out the top-5. 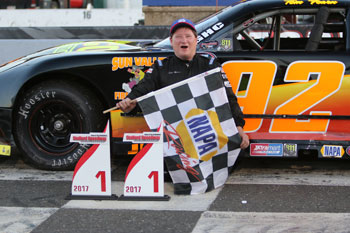 In the 30-lap Late Model feature event, Skip Breunig spun at the start and had damage to the right front of his car and Josh Wood also spun to bring the caution out right at the start.

Paul Arute led the field to the green flag and he took the lead at the start while behind him, Tom Fearn went three wide with Jim Mavlouganes and Wayne Coury, jr. to move into second. Mavlouganes took third with Coury in fourth and Glen Reen was up to fifth.

Fearn took the lead from Arute on lap-4 with Coury now in third, Reen in fourth, and Michael Wray was up to fifth as Mavlouganes fell back to sixth in the running order.   With 10 laps complete Fearn was still in command with Arute, Coury, Reen, and Mavlouganes lined up behind him. The caution came out with 11 laps complete as Breunig spun in turn 3.

Reen spun in turn 2 to bring the caution back out on the restart. The field completed one lap before the caution flag came back out for a spin by Kevin Gambacorta in turn 3. Fearn took the lead on the restart with Wray in second. Arute got around Rich Hammann to take third with Reen going three-wide on the restart to move up to fifth after his earlier spin. Reen took fourth from Hammann on lap-15 as Fearn continued to lead Wray and Arute. Hammann spun backwards into the turn 2 wall to bring the caution out with 17 laps complete.

Fearn took the lead again on the restart with Reen moving into second. Coury was third with Wray fourth and Gambacorta back up to fifth after his earlier spin. Arute slid back to 10th as he got stuck in the outside groove and Tyler Leary, Wood, Michael Bennett, and Mavlouganes all went past.

Fearn led Reen to the checkered flag to pick up his first win of the 2017 season. Reen came home in second with Coury, Wray, and Gambacorta rounding out the top-5. 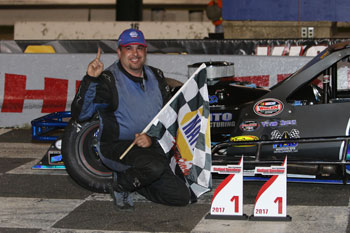 In the 20-lap SK Light feature event, Jay Goff and Joey Ferrigno led the field to the green and they ran two laps side by side before Goff got clear into the lead. Glenn Griswold was third with David Arute in fourth.

Ferrigno took the lead from Goff on lap-10 and as they hit the halfway point the running order was Ferrigno followed by Goff, Arute, Griswold and Glenn Korner, Jr. The caution came out with 13 laps complete for a spin in turn 4 by Noah Korner.

Back under green Ferrigno took the lead with Arute moving up to second. Griswold was still third with Glenn Korner fourth and Goff in fifth when the caution came out with `5 laps complete for a spin in turn 1 that involved Marcello Rufrano and Marc Burke.

The restart saw several cars, including Glenn Bartkowski, Rick Williams, Tony Santangelo, Dan Wesson, and Glenn Korner, all spin in turn 2 to bring the caution back out. Ferrigno again took the lead on the restart with Griswold and Arute side by side for second. Goff was fourth with George Nocera, Jr. and Chris Matthews side by side for fifth. Nocera was on the charge as he got by both Arute and Griswold in the closing laps but he came up short of Ferrigno as Ferrigno picked up his first win of the 2017 season. Griswold finished third behind Ferrigno and Nocera with Arute and Goff rounding out the top-5. 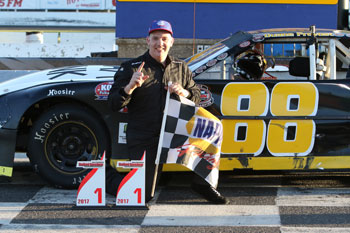 In the 20-lap Limited Late Model feature event, Ryan Fearn took the lead at the drop of the green flag with his sister Alexandra right behind him. Alexandra slid back several spots as R.J. Surdell moved into second and Al Saunders moved into third. Alexandra continued to slide backwards until she was able to slide into line in eighth. Saunders moved into second on lap-6 as he and Surdell touched with Surdell recovering to maintain the third position. Robert Bloxsom, III was up to fourth and Duane Provost was on the charge and up to fifth with 7 laps complete.

Bloxsom was working Surdell over for third and he was able to make a pass on lap-9 with Bryan Narducci, Provost, Cliff Saunders, and Tyler Trott all following him through as Surdell fell back to ninth. Al Saunders got sideways on lap-12 which allowed Bloxsom to move into second. Bloxsom would lose second one lap later to Narducci and Provost nearly spun out as he tried to follow Narducci by Bloxsom. Provost would take third on lap-14 with Cliff Saunders now alongside Bloxsom for fourth as Ryan Fearn was cruising out front. Surdell spun in turn 1 to bring the caution out with 17 laps complete and erase the large lead that Ryan Fearn was enjoying.

Narducci and Fearn were side by side for the lead on the restart and when they hit turn 3, the two cars touched with Narducci nearly spinning out to bring the caution back out. Fearn was sent to the rear of the field by NASCAR Officials for overaggressive driving, which put Provost and Cliff Saunders on the front row for the restart with Blosxom and Matt Clement in the second row.

Provost took the lead on the restart with Clfif Saunders in second. Clement and Bloxsom were side by side for third with Jeremy Lavoie up to fifth. Provost led Cliff Saunders to the checkered flag to pick up his first win of the 2017 season. Bloxsom finished third with Lavoie and Beyer rounding the top-5. Clement spun on the final lap in turn 2 and he finished the race in 9th. 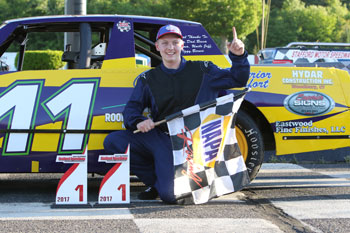 In the 15-lap DARE Stock feature event, Paul Bourdon, Jr. led the field to the green but he nearly got sideways in the first corner and he slick all the way to the back of the pack as Travis Hydar took the early lead with Greg DeMone, George Bessette, Jr., Michael Hopkins, and Johnny Walker making up the top-5. DeMone was quickly overtaken on lap-2 and he slid all the way back to eighth place as Bessette, Hydar, Hopkins, and Walker all moved up a spot.

Hopkins took second on lap-6 but Walker took that spot from him on lap-7 as Hydar continued to lead the race. Zack Robinson was locked in a side by side battle with Hopkins for third with Robinson getting clear into third place on lap-10. Trace Beyer was up to fourth and Brandon Michael was up to fifth as Walker had closed in on the back bumper of Hydar in a fight for the lead with 4 laps to go.

Once Walker caught up to Hydar, he was unable to get close enough to make a move for the win as Hydar took down his very first career feature victory at Stafford. Robinson finished third with Hopkins and Beyer rounding out the top-5.