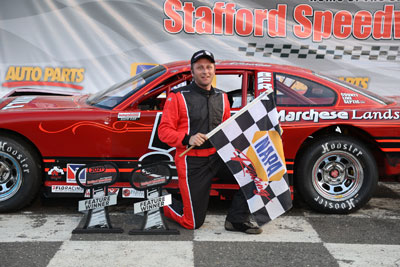 (Stafford Springs, CT)—When the green flag flew on the first Late Model feature of the 2021 season back on April 24 for Stafford Speedway, Kevin Gambacorta kicked off his 21st consecutive season of weekly competition at the Connecticut half-mile facility.  Over the years, Gambacorta has made his name familiar to full fender race fans with 18 feature wins spread across the Late Model, Limited Late Model, and Street Stock divisions to go along with 3 career track championships.  Gambacorta’s most recent victory on May 21st came as a result of some unusual circumstances.

Gambacorta has piloted his own car ever since he made his Stafford debut back in the Street Stock division in 2001 and that’s how he started this season.  Gambacorta was driving his familiar #23 Lavigne Law Dodge and also put together a backup car.  When he experienced a mechanical issue in his #23 car several weeks ago, he turned to an old friend, Andy Marchese and took over the driving duties of the #5 Marchese Landscaping Chevrolet.  After a disappointing 19th place finish on May 14th where Gambacorta had to deal with 2 flat tires during the race, he came back on May 21st and drove the #5 car to NAPA Victory Lane for his first feature win nearly 2 years to the day with his last win coming on June 7, 2019.

“A couple weeks ago in practice I broke a spindle in my car,” said Gambacorta.  “In the process of starting to get things fixed, I got to thinking about my future in the Late Model division and I needed to come up with a plan on where I wanted to go before I got trapped in a box.  Andy is a good friend of mine and I knew his car was only a year or two old and it has the best of everything on it.  Andy agreed to let me drive his car so I called Bob Fill and told him what the plan was and asked if he would work with me.  Bob was on board and originally I was looking to get 3 races and see if I liked everything and if it worked for me but now my deal with Andy is I’m going to drive the #5 car for the rest of the season.  I just sold my #23 car and our plan is to start building a second car that will be a twin to the car that Andy has now so we have 2 cars for next season.” 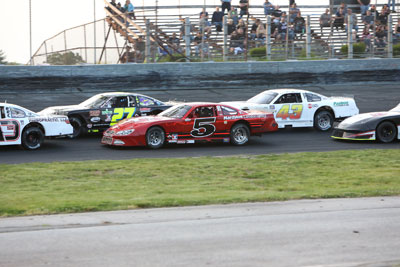 Normally any time a driver changes cars it takes time to get used to the feel and handling characteristics of the car, but for Gambacorta the transition from his #23 car to Marchese’s #5 car was an almost seamless transition.

“I had a feeling the first week I drove the car that if we didn’t have 2 flat tires that we would have had a good shot at winning that race,” said Gambacorta.  “I felt very comfortable in the car and I was able to drive back through the field even though we were a lap down.  I had been doubting myself because it was almost 2 years since I last won a race but that race helped me get my confidence back.  I was telling myself right before that first race in Andy’s car that I might go out and finish 15th or something like that and it might be a couple of races before I got comfortable in that car.  I’ve run the same car for the last 15 years in the Limited Late Model and then Late Model divisions so I figured if I had the chance to try something new without going out and buying everything first then I should take advantage of that opportunity.” 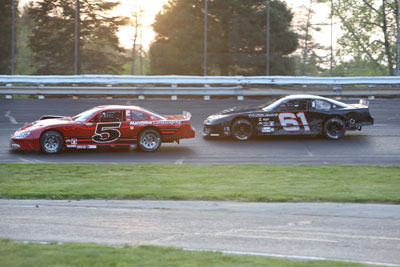 Gambacorta’s new ride not only has him feeling confident about winning races again, but it has also helped alleviate the stress of running his own team with very little crew help.

“The last 2 races, I’ve been more relaxed at the track than I’ve ever been before,” said Gambacorta.  “Bob [Fill] comes down after every practice to look at the car and he made a change on the car before the feature last week just as I was getting strapped in.  I have no idea what he did and I guess I don’t really care what it was because it worked and I don’t have to worry about that stuff any more.  Alex Grab is working with me on tires, so I don’t have to worry about that either.  Normally I’d get out of the car after a practice round or heat race and I’d have no one to lean on so I’d be thinking about maybe check this or change that and I’d be all over the place.  It’s a lot more relaxed now.”

With a renewed confidence and less stress at the track, Gambacorta is now targeting more feature wins as well as making a run at the Late Model championship.  Gambacorta is only 28 points, or 14 positions on the track, behind Michael Wray for the Late Model points lead and he is looking to become the first driver in Stafford history to win track championships in three different divisions. 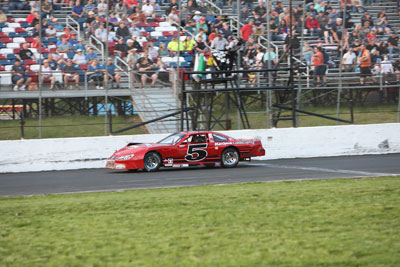 “I think as long as we have good luck we should be a top-5 car every week,” said Gambacorta.  “We obviously want to win more races and right now we’re only 28 points out of the lead so Andy is excited to go try to run for a championship.  I’ve wanted to win a Late Model championship for a long time now and Andy would be more than thrilled to win a championship as a car owner so that’s kind of where our talk is right now.  Andy has really good equipment and I have good people all around me so now if I struggle, we can keep things going in the right direction.  I have to thank all my sponsors, Lavigne Law, LifeCare Family Chiropractic, Cold Creek Tavern, Hometown Pizza, Conventional Builders, CT Axle and Spindle Service, Marchese Landscaping, Right Image Signs, Neil’s Fine Wine and Liquors, and Auto Machine.  We didn’t have them on the car last week, which I felt really bad about, but they’ll all be on the car this Friday and for the rest of the season.”

Gambacorta will look to notch his second consecutive win this Friday night, May 28th starting with qualifying heats at 6pm followed by feature events starting around 7pm.  Tickets are available online at StaffordSpeedway.com/tickets and will also be available at the gates day of show.  General Admission tickets are $20 for adults, $5 for kids 6-14, and free for kids 5 & under.  Reserved seating is priced at $25 for all ages and pit passes are $35 with a valid 2021 Stafford Competition License and $40 without a Stafford license.  If you are unable to attend the event tune into the live stream on FloRacing, the official streaming partner of Stafford Speedway.