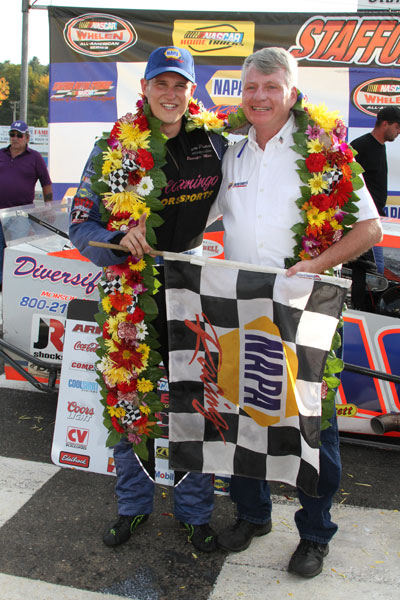 (Stafford Springs, CT)—Stafford Motor Speedway has announced that NAPA Canton store owner Gary Barnes will serve as the Grand Marshal of the 45th Annual NAPA Auto Parts Fall Final Weekend. Barnes will send the NASCAR Whelen Modified Tour to the green flag for their 150-lap race with the most famous words in motorsports.

“I’m really thrilled to be the Grand Marshal,” said Barnes. “It’s something that I never expected and I’m really looking forward to the opportunity. It’s a huge honor. We’ve been in business for 27 years and we’ve been with NAPA for almost the entire 27 years. It’s been a great relationship with NAPA and we’re proud to be NAPA Store owners and also to be part of Stafford Speedway along with NAPA. Partnering with the track is something that we could never do on our own but to be part of the NAPA group and to be able to have such a presence at Stafford, it’s been great and Stafford does a really great job of promoting NAPA. From the announcers with Ben Dodge and Matt Bucker to all the drivers who go to victory lane, they all thank NAPA for participating at Stafford and that is a big thing for us as store owners.”

Barnes has owned and operated the NAPA Canton location for the past 27 years and he has sponsored the SK Modified® teams of Curt Brainard and Ryan Preece and more recently he has been helping the SK Light teams of Cory DiMatteo and Glenn Korner.

“We’ve been with Ryan Preece and done the most with him and it’s been a thrill of a lifetime,” said Barnes. “We’ve been fortunate to travel with Ryan wherever he might be racing, whether its SK’s at Stafford, the Modified Tour, or the Cup and Xfinity races he’s run. We’ve done some things with Curt Brainard over the years with Curt being from Canton and we’ve enjoyed our relationship with Curt. We also help out Cory DiMatteo and Glenn Korner in the SK Lights and the cool thing about our relationship with them is that we do business with both of their fathers. We’re very fortunate to have been able to work with the drivers that we have over the years.”

Ryan Preece kicked off the 2017 season by winning the NAPA Spring Sizzler back in April and he won the Stafford 150 in August. A third NASCAR Whelen Modified Tour win at Stafford would be extra special for Barnes and his NAPA Canton team.

“It’s always exciting for us when Ryan races at Stafford because that’s his home track,” said Barnes. “Winning the first two Tour races at Stafford, especially the NAPA Spring Sizzler, it would be tremendous if he were able to win the NAPA Fall Final. I know the Sizzler was a race that had been on his list for a while that he wanted to win because it’s such a prestigious race and it would be a nice bookend to the season if he can win the Fall Final.”