(Stafford Springs, CT) — In just two short seasons, George Bessette, Jr. has gone from Wild Thing Kart graduate and Stafford rookie to Street Stock champion.  The Danbury, CT native claimed the 2018 Street Stock championship with a dominant season that saw the 15-year old finish outside the top-8 only twice with a division leading 5 wins.  Bessette will return to the Street Stock division to defend his title while also keeping one eye looking towards the SK Light division with plans to move to open wheel competition full-time in 2020. 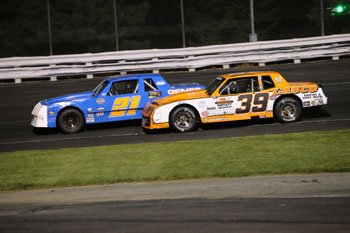 In addition to the Street Stock championship, Bessette will also have his sights set on the Royal Screw Machine Products Street Stock Triple Crown, which will pay a total of $4,500 to the top-10 drivers including $1,000 to the winner.  Each of the RSMPCO.com Triple Crown events will be 30-laps in distance, Bessette won the only 30-lap race on the schedule last season for the Street Stock division.

“I see there’s some pretty big money on the line for the Street Stock Triple Crown,” said Bessette.  “It’s a pretty cool deal to be a part of and our goal is to finish in the top-3 every week and we’ll try extra hard to be in the top-3 for those triple crown events.  We have some pretty good experience from last year with a 30-lap race and we just have to be patient and hopefully things will fall into place for us like they did last year.  We know the car is pretty good for 30-lap events. I think these races are going to make everyone drive a little harder than usual and it’ll be pretty interesting for the fans to watch.  It’s great to have sponsors like Royal Screw Machine Products putting up a bonus like this for one of the lower divisions in the weekly program at Stafford. I have to give them a big thank you for doing this program for the Street Stock division.” 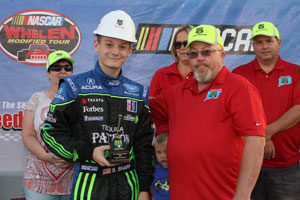 Norm Sears winning three DARE Stock titles in a row from 2006-2008, Bessette would be the third consecutive driver to win back to back titles in the DARE/Street Stock division, following Frank L’Etoile, Jr. in 2014-2015 and Johnny Walker in 2016-2017.

“We’re going to give it our best effort to defend the championship,” said Bessette.  “It would be pretty cool to be in the record books as a back to back champion. There’s going to be a lot of drivers looking to beat us and we just have to do the same things that we did this past season.  It won’t be easy for sure. There’s some new guys coming in who will be quick and we’ll have to give it 110% every week. It would be a storybook ending for us if we could go back to back. I won’t be disappointed if we don’t win the championship again, I would just say that we got beat.  We have some great support from Lasco Roofing and Sheet Metal, Lee Seward Plumbing & Heating, Bagelman, Goodhill Mechanical, the Joie of Seating, Fine Line Building, F & M Electric, Northeast Carpet, and everyone who helps out on the car, and it would be great to win another championship for all of them.  I’m so fortunate to have all these people helping me out. I’m only 16 and it’s like having extra fathers and uncles.”

As the defending champion of the Street Stock division, Bessette knows his #39 Chevrolet carries a bull’s-eye on the back bumper as he will be the car that everyone in the division is looking to dethrone.  If Bessette can continue his high level of consistency with his finishes, he shouldn’t have too much to worry about. In the 38 Street Stock races held from 2017-2018, Bessette has finished in the top-5 17 times for a 68% ratio and he has 34 top-10 finishes for an 89% ratio to go along with 6 wins.

“I think the biggest challenge for us will be the fact that everyone wants to beat the kid and take us down since we won the championship last year,” said Bessette.  “We’re not going to back down, we’re going to be racing just as hard for the championship as we were last year. I think the key is to stay smooth and consistent coming up through the field.  With the handicapping we usually start around 10th every week so it’s a matter of keeping a cool head.  Sometimes I’ll catch myself doing something wrong and I’ll say to myself just relax and calm down, there’s still a long way to go.  Like my father always says to me, just take your time and you’ll wear them out. I’m going to take whatever the car will give me. If we have a second place car, then I’m going to finish second.  If we have a winning car, then I’ll try to win the race.”

Bessette will begin his quest for back to back Street Stock championship with the 48th Annual NAPA Spring Sizzler® on April 26-28. Tickets for the “Greatest Race in the History of Spring” are on sale now by calling the Speedway Box Office 860-684-2783 or online at www.staffordspeedway.com.