(Stafford Springs, CT)—Stafford Speedway returned to NASCAR Whelen All-American Series racing action with the Street Stock division taking center stage with the extra distance R.A.D. Auto Machine Street Stock 30. George Bessette, Jr. took down the extra distance win while other feature winners on the night included Michael Christopher, Jr. winning his second race of the season in the SK Modified® feature, Tom Fearn scored his 12th Late Model win of the year and in the process clinched the track championship, Bryan Narducci made a last lap pass on Marcello Rufrano for the second consecutive week to score his fifth win of the season, and Ryan Fearn won his fourth Limited Late Model feature of the season. 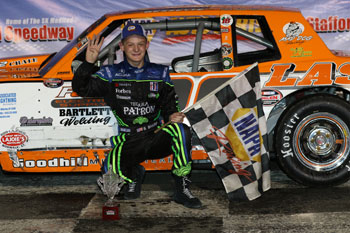 In the 30-lap R.A.D. Auto Machine Street Stock event, Richard Ciriello took the lead at the green with Samantha Anderson behind him in second. Greg DeMone was third in the order with Chuck Harrison and Jason Lafayette side by side for fourth. Anderson made a move to the inside of Ciriello on lap-4 to take over the race lead. The caution then came out with 4 laps complete as Meghan Fuller spun in turn 2 and collected the car of Tess Beyer.

Anderson took the lead on the restart with Ciriello second but the field could only complete one lap before the caution came back out for a spin by David Macha in turn 3 after contact from Beyer. Beyer was black flagged and parked for the remainder of the race for the contact with Macha.

DeMone got a good run on the restart and he took the lead from Anderson. Brandon Michael moved into second with Johnny Walker taking third as Anderson slid back to fourth, just in front of Travis Hydar. Michael moved to the front on lap-8 and he brought Walker with him into second as DeMone fell back to third. Hydar was now fourth with Nicole Chambrello up to fifth.

Walker made a bid for the lead on lap-11 in turn 4 but Michael was able to hold him off and retain the lead. Walker’s move cost him second as Hydar took the position before the caution came out for a spin in turn 2 by Ciriello.

Harrison spun in turn 1 and collected the car of Fuller to bring the caution right back out on the restart. The next restart saw Michael streak into the lead with Walker glued to his back bumper. George Bessette, Jr. worked his way up to third with Hydar fourth and DeMone back to fifth. This was the order when the caution came out with 20 laps complete for a spin on the backstretch by Rob Sears.

Michael and Walker were side by side for the lead on the restart with Bessette right behind them. Michael got clear on lap-21 and Bessette got by Walker to move into second. Hydar was all over Walker’s bumper in fourth with DeMone still fifth. Bessette nearly spun coming out of turn 4 as he tried to take the lead from Michael before the caution came out with 24 laps complete for a spin in turn 3 by Macha.

Michael and Bessette were now side by side for the lead on the restart with Walker looking for a way to get around both cars. Macha and William DesJardins came together and spun on the backstretch to bring the caution back out with 25 laps complete.

Bessette got a good run in the outside lane and he took the lead from Michael, who nearly spun as he tried to keep the lead. Walker moved into second with Hydar taking third. Chris Bagnall moved into fourth as Michael fell all the way back to fifth. Michael got back around Bagnall on lap-28 to move in to fourth. Bessette led Walker to the checkered flag to pick up his fourth win of the 2018 season. Hydar finished third with Michael and Bagnall rounding out the top-5. 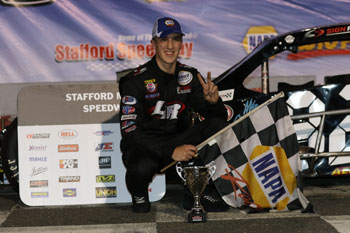 In the 40-lap SK Modified® feature event, Tyler Hines and Tony Membrino, Jr. led the field to the green and they raced side by side with Matt Galko third, Michael Gervais, Jr. fourth, and Chase Dowling fifth. Keith Rocco brought the caution out with 3 laps complete by stopping on the track with a flat left front tire. Rocco was given a one lap penalty for drawing an intentional yellow flag.

Membrino took the lead on the outside of Hines with Michael Christopher, Jr. following him by Hines. Christopher and Dowling then both moved around Membrino on lap-5 and began a side by side fight for the lead. Woody Pitkat was up to third driving Dan Avery’s car with Glen Reen fourth and Gervais fifth. Just behind Gervais was Todd Owen and Eric Berndt with Membrino falling back to eighth.

With 15 laps complete, Christopher had cleared Dowling and was pulling away while Dowling was locked in a wheel to wheel fight with Pitkat for second. Reen was still in fourth with Gervais holding fifth. Pitkat won the duel with Dowling to get clear into second place on lap-19 while Ronnie Williams was charging his way to the front by moving around Owen to take seventh place.

Williams took sixth place from Berndt on lap-23 while Reen was starting to apply heavy pressure to Dowling in a fight for third. Williams continued his charge to the front by taking fifth place from Gervais on lap-30 as Christopher was still leading the race with Pitkat in second. Dowling and Reen were still side by side for third with Williams now stuck behind the two cars. Dowling nearly had Reen cleared on lap-34 but Reen was able to stay wheel to wheel with Dowling with Williams looking for any opening he could get to pass them both.

Christopher cruised to his second feature win of the 2018 season with Pitkat coming home second. Dowling edged out Reen by inches at the line for third with Williams rounding out the top-5. 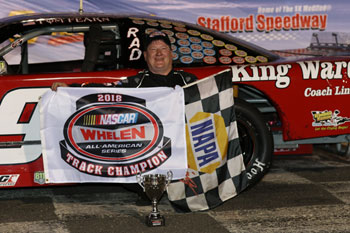 In the 30-lap Late Model feature event, Tyler Leary took the lead at the start of the race with Glen Reen, Darrell Keane, Al Saunders, and Kevin Gambacorta lined up behind him. Reen slipped up the track which allowed Keane to take second, Fearn third, and Saunders fourth as Reen slid back to fifth. Reen spun coming out of turn 4 to bring the caution out with 8 laps complete. Reen rejoined the race at the rear of the field.

Leary took the lead on the restart with Fearn moving into second and then taking the lead from Leary in turns 3+4. Keane took second from Leary on lap-10 while Paul Arute was up to fourth and Saunders was fifth. Arute spun in turn 1 after contact with Saunders, which collected the car of Michael Wray and brought the caution out. Arute pulled behind the wall on pit road while Wray came to pit road for repairs.

Fearn took the lead on the restart with Keane right behind him in second. Leary was third with Saunders fourth and Reen back up to fifth. This was still the running order at the halfway point of the race.

Fearn led the field to the checkered flag to score his 12th win of the 2018 season. Keane finished second with Leary, Saunders, and Reen rounding out the top-5. Fearn’s victory, combined with Leary’s third place finish, locked up the 2018 track championship for Fearn.

In the 20-lap SK Light feature event, Wesley Prucker took the lead at the green but he had Andrew Molleur to his inside and Bryan Narducci to his outside with both drivers looking to take the lead. Molleur took the lead on lap-3 with Marcello Rufrano slotting into second. Narducci and Prucker were side by side for third with Teddy Hodgdon in fifth.

Narducci was applying heavy pressure to the back bumper of Rufrano for the lead and several times he made moves to the inside of Rufrano but Rufrano was able to hold off his challenges. Lap after lap Narducci would dive to Rufrano’s inside but was unable to complete a pass. Narducci use the high line in turns 1+2 on the final lap to get a good run going down the backstretch and going into turn 3 he again pulled alongside Rufrano. The two cars drifted up the track in turn 4 with Narducci emerging with the race lead and he took the checkered flag for his fifth win overall and second consecutive of the 2018 season. Molleur also got by Rufrano in the final corner to come home second with Rufrano, Bakaj, and Hodgdon rounding out the top-5. 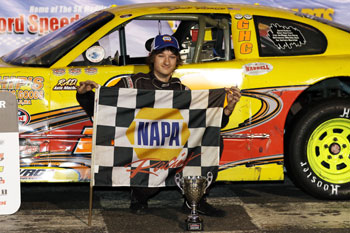 In the 20-lap Limited Late Model feature event, R.J. Surdell spun coming out of turn 2 at the start of the race and collected the car of Andy Marchese to bring the caution out before a lap could be completed.

Matt Clement took the lead on the resetart with Ryan Fearn and Gary Patnode side by side for second place. Duane Provost was quickly up to fourth with Jeremy Lavoie in fifth. Fearn moved to second and Provost moved to third on lap-3, which dropped Patnode back to fourth in line.

Fearn took the lead from Clement with a pass in turns 3+4 on lap-4 with Provost still third. Lavoie pulled alongside Patnode in a duel for fourth place on lap-6 and he took the spot on lap-7. Alexandra Fearn followed in the tire tracks of Lavoie to move into fifth and drop Patnode back to sixth in line. At the halfway point Ryan Fearn was still out front with Clement, Provost, Lavoie, and Alexandra Fearn all giving chase.

Ryan Fearn went unchallenged to the checkered flag to pick up his fourth win of the 2018 season. Clement finished second with Provost, Lavoie, and Alexandra Fearn rounding out the top-5.