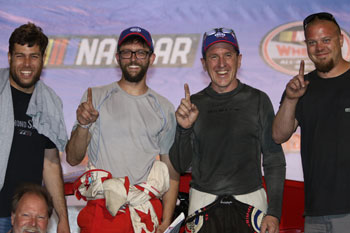 (Stafford Springs, CT)—For Stafford SK Light driver George Nocera, Jr., the 2017 season was a year that brought the highest of highs and the lowest of lows to the Plainville, CT native and the #38 Allstate Fire Equipment team.

Prior to the 2017 season, Nocera teamed up with Ted Christopher to drive one of his modifieds in the SK Light ranks and the first half of the season Nocera took down his first career victory on May 19th and led the SK Light points standings for 5 consecutive weeks. When August rolled around, Nocera saw his fortunes take the wrong kind of turn on the track as he scored three finishes of 14th or worse in his last 5 races and an accident in the September 1st feature sidelined him for the remainder of the season. But Nocera has expectations to return to his winning ways for 2018.

“I can’t wait to get back behind the wheel,” said Nocera. “We got into a wreck late in the season and the car was sitting in Teddy’s shop and once he passed away, that kind of put everything on hold with the car. I let the family know that I was interested in buying the car so they let me put the car back together. We bought the car and brought it back to my house, and now we’re ready to go racing. It’s an overwhelming feeling just to be in one of Teddy’s cars and it’s a great feeling to be back on the track. I didn’t really think we would have this chance but we were given this opportunity and now we have to make the most of it.” 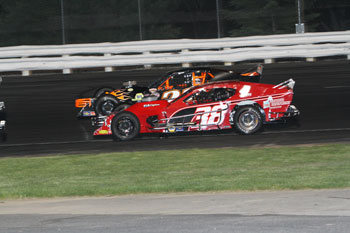 Nocera will be looking for redemption in the extra distance, big money Dunleavy’s Modifiedz Night feature scheduled for May 25th. Nocera was battling for the lead in last year’s Dunleavy’s Modifiedz Night feature for what would have been his fourth podium in five races, but he came together with Cory DiMatteo while making a move for the lead and ended his night early, leaving him with a 15th place finish.

“I’d love to have a good run in that Dunleavy’s race and redeem myself from last year,” said Nocera. “Looking back I made a bonehead move at the end of the race with less than 10 laps to go and I drove right over Cory’s {DiMatteo] left rear. That was pretty bad and I need to redeem myself. We started in the back for that race and we were able to work our way towards the front and I’m hoping we can do that again and put the car back in NAPA victory lane.”

To go along with his win last year, Nocera also posted two seconds, a third, and two fourth place finishes in his 13 starts. Nocera got his first win at Stafford in 2005 while in the DARE Stock division and he won a total of 10 Limited Late Model feature events from 2006 to 2011. After working on the car during the winter, Nocera is confident that he can get the car back into NAPA Victory Lane and he can once again enjoy the feeling of winning a race in a car that belonged to his mentor and friend, Ted Christopher. 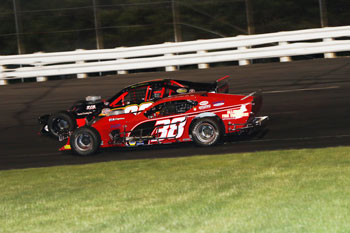 “I definitely think we have what we need to get back to victory lane,” said Nocera. “Last year was honestly one of the best feelings I’ve ever had with Teddy standing next to me in victory lane. I don’t think anyone else besides maybe Tony Stewart has won races in Teddy’s equipment so that win felt really good. There’s a lot of young guys coming up and there’s a lot of good guys in the division so we’ll have to see how things go in the first few races for us.”

The 2018 SK Light season kicks off with this weekend’s 47th Annual NAPA Auto Parts Spring Sizzler®. Tickets for the “Greatest Race in the History of Spring” are on sale now at the Speedway Box Office. Tickets are priced at $40.00 for adult general admission tickets, $5.00 for children ages 6-14, and children ages 5 and under are admitted free of charge when accompanied by an adult. Reserved seating is priced at $42.00 for all ages. As always, Stafford Motor Speedway offers free parking with overnight parking available. Tickets are good for both Saturday and Sunday admission. All ticket prices include 10% CT Admission Tax. Discount Tickets are now available at participating NAPA Auto Parts stores. For a full list of the 72 participating locations throughout Connecticut, Massachusetts, New York, Rhode Island, and Vermont, please call the speedway office or point your web browser to www.staffordmotorspeedway.com/participating-napa-auto-parts-stores.