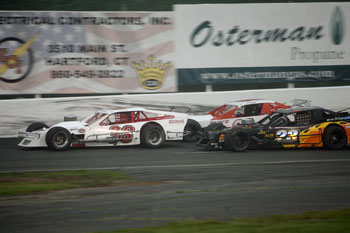 (Stafford Springs, CT)—When the green flag drops on the 2017 SK Light season at Stafford Motor Speedway, Plainville native George Nocera, Jr. will be back in the starting field for the first time since the 2008 season with a fairytale story and a well-known car owner.

Being a lifelong Plainville resident, Nocera grew up a fan of Ted Christopher, who tops the career championships and feature win list at Stafford notching the most of any driver in the history of the half-mile. Nocera is familiar with open-wheeled racing competing in the SK Light division in 2007 and 2008 for car owner Gary Bienkowski. George will now pilot a car that owned by his racing idol Christopher and sponsored by Allstate Fire Equipment and M&T Enterprises.

“It was a couple of months back I was joking around with some of my friends about trying to get back out there and we started looking at some cars,” said Nocera. “We ended up talking with Teddy and we’re going to rent a car from him for the season. Just being able to race one of Teddy’s cars is the biggest thing ever for me. Being from Plainville, my father would take me to the track and I was always a Teddy fan growing up. This whole situation is so surreal to me, I almost feel like one day I’m going to wake up from this dream and it’ll all be over.”

In his career at Stafford, Nocera has driven every type of car except for an SK Modified® machine. From 2005-2014 Nocera competed in the DARE Stocks, Limited Late Models, SK Lights, and Late Models. Nocera had 3 wins in his only season of DARE Stock competition in 2005, and he grabbed 10 feature wins in the Limited Late Model division from 2006-2011. Nocera’s best SK Light finish was a series of third place finishes during his abbreviated 2008 campaign. George is confident that he has everything he needs in place in order to collect his first career open wheeled feature victory.

“There’s a small group of my friends that are going to help me out along with Teddy’s crew chief Mike O’Sullivan, who said he’d help us out with tires and things that I’m not too familiar with on the car,” said Nocera. “With his help I think we can be good because he’s helped Teddy to many wins and championships. The car is an old Mystique car and there’s not much for us to do. We have to change the gear and a couple of other things and we have a motor from T/A so we’re ready to get racing. I feel confident, I’ve been driving cars long enough that we should be able to be a contender with everyone else right away. We have good equipment with one of Ted’s cars and I don’t see why we couldn’t go out and get on the podium or even be a contender for the championship. If we can’t contend for the championship, I’d like to at least get a couple of wins because I haven’t won in the SK Lights yet. I grew up watching Teddy race and it would be mind blowing if we could win this year in one of his cars.” 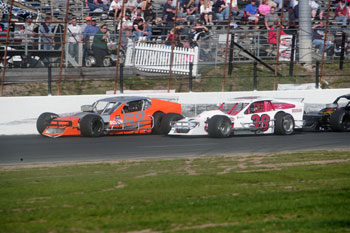 If there is one area where Nocera might be rusty upon his return to Stafford, it would be the competition that he will be facing each Friday night. With 43 drivers registered for the SK Light division, Nocera will face an interesting mix of veteran, young, and rookie drivers as he looks for his first career SK Light win.

“There’s going to be a big field of cars this season and I think the biggest challenge for us might be to just survive,” said Nocera. “I think we were the 40th car to register this season and I see a lot of familiar faces and some younger drivers on the list. I’m sure that they can all drive so it’s going to be a very competitive season for sure and we can’t wait to get started. It might take a couple of practice sessions to get going because most of the guys aren’t used to working on SK Lights, which are a little underpowered compared to the SK cars. But I definitely think we can be one of the fastest cars right away.”

Nocera also has his eyes set on the May 26th Dunleavy’s Modifiedz Night, where the SK Lights will race a 40-lap feature instead of their usual 20-lap distance and there will be a guaranteed purse of $10,000 up for grabs with the race winner looking at a payday of over $2,500 with contingency bonuses and the purse money.

“We’re all looking forward to the Dunleavy’s Night, that race is kind of what turned our heads that we needed to put something together and get back to racing at Stafford,” said Nocera. “We can’t wait for that race and that will be one of the longest races I’ve ever ran in my career. I just have to keep my head and be there at the end.”

The 2017 SK Light season kicks off with the 46th Annual NAPA Auto Parts Spring Sizzler on April 28-30. Tickets for the “Greatest Race in the History of Spring” are on sale now at the Speedway Box Office. Tickets are priced at $40.00 for adult general admission tickets, $5.00 for children ages 6-14, and children ages 5 and under are admitted free of charge when accompanied by an adult. Reserved seating is priced at $42.00 for all ages. As always, Stafford Motor Speedway offers free parking with overnight parking available. All tickets are good for both Saturday and Sunday admission. All ticket prices include 10% CT Admission Tax.