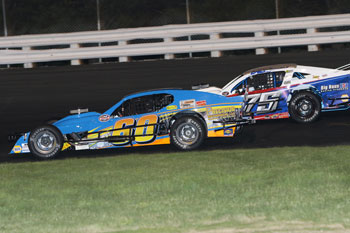 (Stafford Springs, CT)—Prior to the start of the 2017 season, Stafford SK Light driver Glenn Griswold had no plans to be racing. Enter car owner Ed Chicoski, who originally contacted Griswold to ask how he could help Chicoski land behind the wheel of a car for the 2017 season. After Chicoski bought a car that Griswold put together for him to drive, Chicoski went out and bought a second car. Originally meant to be a backup to his #45 machine, that second car became the #60 car that Griswold has piloted all season long.

“Ed Chicoski owns [the #45 and #60 cars] and I’m the lucky guy that gets to drive his backup car,” said Griswold. “Ed was looking to drive a car and he called me over the winter and asked me what I could do to help get him in a car. I told him that I didn’t own a car and if he wanted to buy a car, I’d work on it for him. Ed purchased Josh Galvin’s #13 car over the winter and I put it together. Right before the season started, Ed said let’s get another car so he bought the #77 car that was run at Stafford by Anthony Massaro back in 2011 and 2012 and we put that together. Originally I wasn’t going to be racing at all this season. When Ed bought the #60 car, that gave me the opportunity to run some shows.” 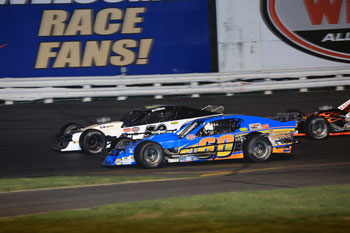 After not having a ride lined up, Griswold has made the most of his opportunity behind the wheel of the #60 Precision Mechanical Chevrolet. Griswold recorded back to back third place finishes in early June and he was as high as second in the points at the end of June. A series of bad finishes in July plus a wreck that sidelined him for a race has dropped Griswold out of championship contention but he is still in the top-10 in the standings and any misfortunes during the season were washed away this past Friday night when Griswold drove the #60 into NAPA Victory Lane for his first SK Light win at Stafford since 2014.

“We definitely knew if the car was right we could win,” said Griswold. “We bought the 60 car the week before the season started so it’s been a work in progress. The car had been sitting for 5 years and the first couple of races that we ran it, the motor seemed a little flat, so we had it freshened and we started going good until we got wrecked. Last Friday night was a huge win. We bust our butts in the shop 4 or 5 nights a week and it’s a huge accomplishment for a little team out of Vernon. We do all our own chassis work and sheet metal, and we have to give a big thanks to Dan Petrowsky for putting a front clip on the car and making it 100%. We’ve been in the top-10 points since the first race and we were as high as second in points before we had a couple of bad weeks and we’ve been right around 8th or 9th in the standings. For this season to be Ed’s first as a car owner, it’s a pretty big accomplishment to have a car in the top-10 in the points for a guy who had never been in racing. I definitely have to thank Tom Magnum, Tim Fogg, and Pete, he’s a young kid that came along with us this season, and Precision Mechanical and Earthlight Technologies for sponsoring us this season.” 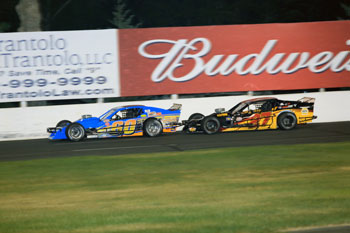 Griswold is currently only 10 points behind 8th place in the standings and with 4 races left in the 2017 season, he is looking to get back to victory lane before the end of the season.

“I think we can win again,” said Griswold. “I’ve been doing this for a long time and I feel like our chassis setups are just as good as anyone’s out there.

Griswold will try to go back to back this Friday night as part of the First Responders Appreciation Night program at Stafford. All First Responders (EMT, Fire, Police) will receive a general admission ticket for only $10 by showing their I.D. at the admission gate. Regular tickets are priced at $17.50 for adult general admission, kids 6-14 are $5.00 and kids 5 & under are free. Reserved seating is available for $20 for all ages. All ticket prices include 10% CT Admission Tax. Stafford Motor Speedway offers plenty of free parking along with overnight parking available for self contained Recreational Vehicles.