(Stafford Springs, CT)—Stafford Speedway returned to NASCAR Whelen All-American Series racing action on Friday, June 9th with the Dunleavy’s Modifiedz Night. Stafford’s SK Lights took center stage with a 40-lap feature that paid over $14,000 in total posted awards while the SK Modifieds® ran an extra 10-laps in feature distance for an extra $4,000 in their purse. Taking down the biggest win of the night was Brett Gonyaw, who took the checkered flag and a pay check of over $2,700 in the 40-lap SK Light feature. Ronnie Williams took the checkered flag in the extra distance SK Modified® feature, Michael Wray won the Late Model feature, Duane Provost took down his second consecutive Limited Late Model feature win, and Johnny Walker won the DARE Stock feature. 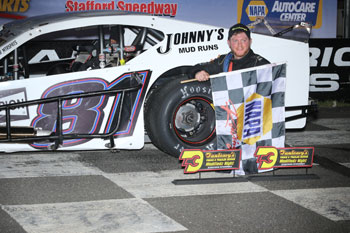 In the 40-lap SK Light feature event, Keith Caruso took the lead at the green on the outside of Noah Korner. Korner was side by side with Todd Douillard for second with Glenn Korner side by side with Jay Goff for fourth behind them. Goff got clear into fourth on lap-4 as Noah Korner and Douillard were still side by side for second. The caution came out with 5 laps complete for a multi car wreck coming out of turn 2 involving Tony Santangelo, Marcello Rufrano, Wesley Prucker, and several others.

Caruso powered into the lead on the restart with Noah Korner all over his back bumper. Goff slotted into third with Glenn Korner fourth and Douillard in fifth. Dan Wesson got around Douillard to move into fifth on lap-7 and up front, Noah Korner made a move to the inside of Caruso to take the lead by a nose at the line. Another multicar accident in turn 3 involving Rufrano, Glenn Griswold, Joe Graf, Jr., and Chris Matthews brought the caution back out with 10 laps complete.

Noah Korner used the outside groove to his advantage as he got a good run through turns 3+4 after the restart to power his way past Caruso to take over the race lead. Goff was third with Wesson right behind him in fourth and Glenn Korner was fifth. Wesson took third from Goff and he began to close in on Caruso in second as Noah Korner had pulled away to a several car length lead. Chris Viens and Joey Ferrigno spun in turn 4 to bring the caution out with 18 laps complete.

Caruso took the lead from Noah Korner on the restart with Wesson and Goff side by side for third. Glenn Korner was fifth with David Arute and George Nocera, Jr. side by side for sixth. Noah Korner retook the lead on lap-21 and Wesson moved into second. Noah Korner got loose in turn 4 and overcorrected his car and took a hard hit into the turn 4 wall to bring the yellow and red flags out. Korner was able to climb out of his car and walk to the ambulance. Wesson was sent to the rear of the field under the caution for over aggressive driving.

Nocera took the lead on the restart with Cory DiMatteo taking second. Caruso was third with Brett Gonyaw in fourth and Douillard was fifth with Goff right behind him in sixth. DiMatteo made a move for the lead on lap-33 and when he made his move, Nocera made contact with DiMatteo and Nocera spun along with Douillard getting into the wall and Caruso’s great run came to an end as he came to a stop in turn 4 to bring the caution out. This put Brett Gonyaw into the lead with Goff second, Bob Charland third, Prucker fourth, Glenn Griswold fifth, and Geoff Nooney in sixth for the restart.

Charland was hounding Gonyaw for the lead but Gonyaw was able to fend off his challenges and he took the checkered flag for the first win of his career at Stafford. Griswold finished third with Goff and Rick Williams rounding out the top-5. 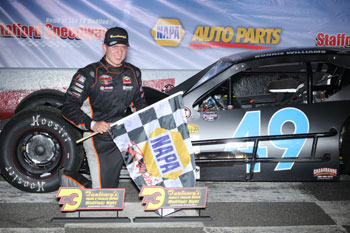 In the 50-lap SK Modified® feature event, Tony Membrino, Jr. took the lead at the drop of the green with Jeff Baral moving into second. Michael Gervais, Jr. fell back to third but quickly worked his way back to the outside of Baral in a duel for second with Stephen Kopcik and Glen Reen side by side for fourth. Gervais got clear into second on lap-2 with Baral, Kopcik, and Reen lined up single file behind him. Gervais made a move to the inside of Membrino on lap-5 but Membrino was able to hold him off and keep the lead.

Gervais took the lead on the restart with Reen going 3-wide with Todd Owen and Membrino to move into a side by side duel with Owen for second as Membrino fell back to fourth. Rowan Pennink took fourth from Membrino on lap-9 and Membrino fell back another spot as Ronnie Williams moved into fifth. Dan Avery got into the turn 3 wall after some mid-pack contact to bring the caution out with 10 laps complete.

Reen shot into the lead on the restart with Owen and Gervais side by side for second. Williams and Pennink were side by side for fourth but the caution came back out with 12 laps complete as Cam McDermott spun in turn 3.

Reen took the lead back under green with Owen taking second. Gervais was third with Williams and Pennink side by side for fourth. Williams got to the inside of Gervais and took third on lap-14 with Matt Galko getting around Pennink to move into fifth. Galko then got around Gervais to move into fourth on lap-15.

The action continued at the front as Owen went by Reen to take over the race lead on lap-18 but Reen came right back in turns 3+4 with a crossover move to retake the lead. Gervais took a quick trip through the frontstretch grass but he was able to rejoin the race at the rear and the race stayed green. Reen was the leader with Williams, Owen, Galko, Pennink, and Ted Christopher making up the top-6 on lap-20.

Williams made a power move entering turn 3 on lap-24 to overtake Reen and move into the race lead. Owen, Galko, Penninnk, and Christopher still made up the top-6 behind Williams and Reen. Owen got out of shape on lap-26, which allowed Galko to make a pass and take over third and Pennink was now side by side with Owen in a fight for fourth. The caution came back out with 28 laps complete as Membrino and D.J. Burnham came together in turn 3.

Williams took the lead on the restart with Galko moving up to second and Owen moving up to third as Reen fell back to fourth in the order. Pennink was fifth with Ryan Preece now up to sixth and Rocco was seventh. Reen went high and lost two spots on lap-34 as Pennink and Preece were both able to move around him. Christopher then got by Reen on lap-35 to drop him back to seventh in the running order as Williams continued to lead Galko and Owen.

With 10 laps to go, Williams held the lead with Galko, Owen, Pennink, and Christopher all giving chase. Christopher was working the outside lane against Pennink but was unable to put a pass together. Williams held Galko off to the checkered flag to pick up his first win of the 2017 season. Owen finished third with Pennink and Christopher rounding out the top-5. 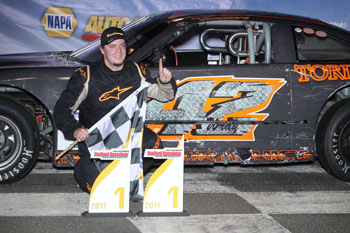 In the 30-lap Late Model feature event, the action was fast and furious at the front of the field at the drop of the green with Michael Wray moving into the lead, Paul Arute into second. The action continued to head up behind them as Michael Bennett quickly moved into third with Josh Wood fourth and Tom Fearn was streaking through the field and he was up to fifth on lap-5.

Fearn took fourth Wood on lap-7 and Bennett got around Arute to move into second as Wray continued to lead the race. Kevin Gambacorta was able to get around Wood for fifth as the field clicked off 10 laps on the scoreboard with Wray still out in front of Bennett, Arute, and Fearn.

Gambacorta got by Fearn to move into fourth on lap-16 as Wray and Bennett had pulled away from Arute in third. Gambacorta and Fearn were closing in on Arute and as they completed lap-20, Gambacorta was right on Arute’s back bumper. Gambacorta took the spot from Arute on lap-21 and Fearn tried to follow him by, but Arute was able to maintain fourth.

While Fearn couldn’t get by Arute, Gambacorta was able to get around both Fearn and Arute to move into third but no one could catch Wray as he took the checkered flag in a dominating performance. Bennett finished second with Gambacorta, Arute, and Fearn rounding out the top-5. 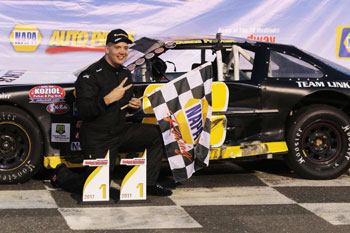 In the 20-lap Limited Late Model feature event, Ryan Fearn took the early lead with Alexandra Fearn in second. Bryan Narducci was third with Jeremy Lavoie fourth and Al and Cliff Saunders in fifth and sixth. Lavoie made a move to the inside of Narducci for third on lap-6, but he had to fall back in line as Ryan and Alexandra Fearn continued to set the pace out front.

Lavoie was under attack from Al Saunders on lap-11 and he fell from fourth back to sixth as Saunders and then Duane Provost both got by. R.J. Surdell was now alongside Lavoie for sixth on lap-13 as the two Fears continued to lead Narducci. Going into turn 1 on lap-15, Narducci and Alexandra Fearn touched with Fearn backing hard into the turn 1 wall and Al Saunders also spun to bring the caution and red flags out with 14 laps complete. Fearn was able to get out of her car and walk to the ambulance.

Provost got around Ryan Fearn to take the lead on the restart and the field completed the lap before Matt Clement spun in turn 4 to bring the caution back out.

Provost took the lead back under green with Lavoie taking second from Fearn. Robert Bloxsom, III and R.J. Surdell were side by side for fourth but Bloxsom spun through the backstretch grass to bring the caution out with 17 laps complete. 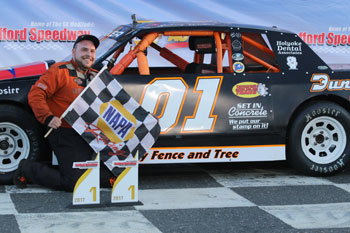 In the 15-lap DARE Stock feature event, Chris Bagnall took the early lead at the green with Chris Sanford and George Bessette, Jr. behind him but the field could only complete one lap before Nicole Chambrello and Richard Ciriello spun in turn 4 to bring the caution out.

Bagnall took the lead on the restart with Bessette quickly moving up to second. Johnny Walker was third with Brandon Michael fourth and Michael Hopkins in fifth. Walker took second from Bessette on lap-3 and he took the lead from Bagnall on lap-4 with a move in turns 3+4. Michael was also on the move as he took third from Bessette on lap-5 and Hopkins followed him by to drop Bessette back to fifth on lap-5.

Zack Robinson got by Hopkins to move into fourth on lap-9 as Walker continued to lead Bagnall and Michael. Robinson continued his charge as he took third from Michael on lap-10 and he began to close in on the top-2 but the caution came out with 10 laps complete as Sanford spun in the middle of turns 3+4.

Walker took the lead on the restart with Robinson right on his back bumper. Bagnall was third with Michael in fourth and Bessette in fifth. Robinson couldn’t catch Walker as he took down his first win of the 2017 season after three consecutive second place finishes. Bagnall finished third with Bessette and Michael rounding out the top-5.