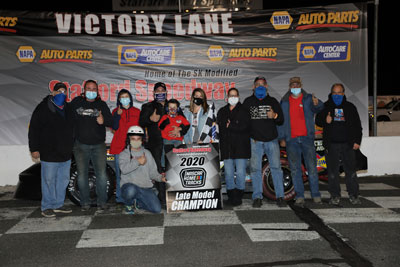 (Stafford Springs, CT)—While a championship is a special occasion for any driver in their racing career, for Stafford Late Model driver Adam Gray, his 3rd Stafford Late Model title carries with it some extra meaning.  Prior to the 2019 season, long time crew member and family friend of both Gray and his father Barry, Leon Chartier, passed away.  Chartier made Gray promise that he would one day return to Stafford after not racing from 2016-2018 and win a race.  Gray checked that box last season and he one-upped his feature win from last season with 6 more wins this year en route to his third career championship at Stafford.

“Leon and my father started racing together and Leon was like a second father to me,” said Gray.  “Leon helped my father and myself for years and his shop is where we work on our cars.  As long as I’m racing his name will always be on my car.  Leon got sick and he pulled me aside one day and told me that one day I was going to go back to Stafford and win a race.  We won that race last year and that was pretty cool and this year we did one better for him and won the championship.  It was heartbreaking and heartwarming all at the same time.  Knowing that we were doing this for him but not having him with us was the heartbreaking part.  I sat in the car for a little bit last Friday night after the race was over and I had tears in my eyes and I kept looking up and saying ‘I did it for you.’  It’s pretty cool to be able to accomplish something and have more meaning behind it than just racing.” 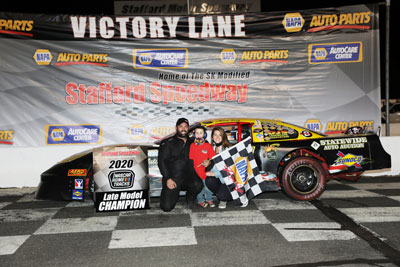 “We had some phenomenal races this year,” said Gray.  “Other than Wayne Coury and Ryan Fearn, we were the only repeat feature winners and this season kind of followed in the tracks of our 2014 championship.  We had a few more DNF’s than we’ve had in the past but we had strong finishes and we finished up front.  It’s special to look at the all-time wins list and champions list for the Late Model division at Stafford and see my name surrounded by some pretty darn good drivers like Tom Fearn, Chuck Zentarski, Woody Pitkat, Ryan Posocco, and Jim Peterson.  Those are all guys who I learned from when I first came to Stafford to go Late Model racing.  I have to thank Meadows Motor Car, Leon’s Auto Repair, Gregg Orhlen Construction, Statewide Auto Auctions, Donny from R.A.D. Auto Machine, Williams Race Gears, Hawley’s Auto Body and Repair, Hi Tech Transmissions, Barrco Automotive, Waddell Communications and my entire crew.” 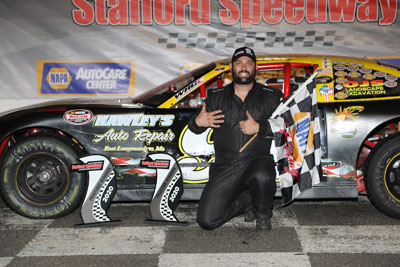 “We were just coming to Stafford to have some fun and try to win some races on a part time schedule this year,” said Gray.  “Early in the season I was going to miss a race at Stafford because my father was racing but that got rained out and then it got to the point where we were invested and we saw the possibility of winning a championship so we put some other things on the back burner and focused on Stafford.  As a crew we kind of decided after we had a couple of good runs and we won 2 races in a row to go the full season.  Those two wins were very motivating for us.”

“You would think because of the shortened season due to the pandemic going on that things would be a little easier, but the short season didn’t leave you any room to make errors,” said Gray.  “If you got behind, then you were going to have a hard time to make up any points you lost.  The fortunate thing for us was the couple of nights when we had a bad night, the guys who were second, third, or fourth in points also had a bad night.  This season was more of a grind because there wasn’t 20 races where you had more opportunities to make up for points.”