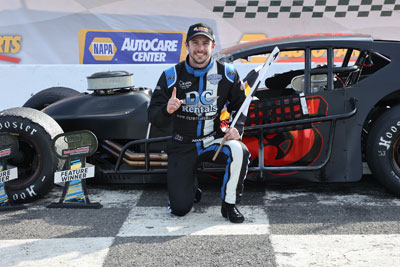 In the 40-lap SK Modified® feature, Tyler Hines and Marcello Rufrano led the field to the green flag with the two cars still side by side at the completion of lap 1.  Hines had the lead by a nose at the line to complete lap 2 before he got clear to the lead on lap-3.  Stephen Kopcik charged by Rufrano to move into second with Ronnie Williams moving into third to drop Rufrano back to fourth place before Michael Christopher, Jr. spun in turn 4 to bring the caution out with 4 laps complete.

Hines took the lead on the restart with Williams taking second from Kopcik.  Kopcik slotted into third in line with Todd Owen and Rufrano lined up behind him.  Wesley Prucker made contact with the frontstretch wall and damaged his right front suspension and limped back to pit road on lap-7 but the race stayed green.  Michael Gervais, Jr. was sixth in line behind Hines, Williams, Kopcik, and Owen with Teddy Hodgdon seventh, David Arute eighth, Andrew Molleur ninth and Troy Talman tenth.  Owen and Rufrano both went by Kopcik on lap-10 to move into third and fourth wile Hines and Williams were starting to pull away from the field in the front two positions.

Talman pulled behind the wall on pit road on lap-18 and his crew went to work under the hood of his #3 car.  At the halfway point of the feature Hines was still out in front with Williams giving chase.  Owen was third followed by Rufrano, Gervais, and Molleur when the caution came back out for Tyler Leary, who spun coming out of turn 4.

Hines again took the lead on the lap-21 restart with Owen moving into second.  Williams was third but behind them Molleur and Wesson spun with Wesson collecting the car of Jon Puleo to bring the caution back out with 21 laps complete.

Williams took a look to the inside of Hines on the restart for the race lead but he fell back in line behind Hines and was side by side with Owen for second before taking second on lap-23.  Gervais was up to fourth behind Owen with Kopcik, Joey Ternullo, Jr., Keith Rocco, Rufrano, Arute and Noah Korner making up the top-10.

Again Hines and Williams were beginning to pull away from Owen, Gervais, and Rocco but their margin was erased by the caution with 30 laps complete for spins in turn 4 by Kopcik and Korner.

Hines took the lead on the restart with Williams slotting into second and Owen third.  Gervais was fourth followed by Rocco, Ternullo, Christopher, Jr., Chase Dowling, and Rufrano.  The caution came back out with 34 laps complete for a spin in turn 4 by Korner with Hines and Williams still at the front of the pack.

Hines and Williams again took the top 2 spots on the restart but the caution came back out with 36 laps complete for a spin in the middle of turns 3+4 by Ternullo and Christopher, Jr. to set up a 4 lap dash to the finish.

The restart saw the caution come right back out as Tom Bolles, Korner, and Leary all spun on the backstretch.  The next restart saw Hines take the lead with Rocco pulling alongside Williams for second.  Rocco took second on lap-38 with Dowling and Owen side by side for fourth place and Gervais in sixth.

Rocco closed in on the back bumper of Hines during the final lap but Hines held him off to the line to score his first career SK Modified® feature win.  Williams finished third with Dowing and Gervais rounding out the top-5. 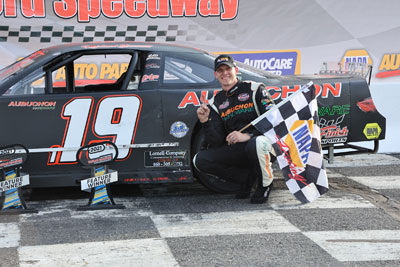 In the 30-lap Late Model feature, Michael Wray led the field to the green flag and he took the early lead.  Michael Bennett worked his way past Ryan Fearn to take second.  Fearn came back to take second on lap-2 but the caution came out for Andrew Durand, who spun into the turn 1 wall and Tom Butler, who came to a stop against the frontstretch wall.

Wray powered to the lead and pulled out to a commanding lead over Wayne Coury, Jr. in second.  Tom Fearn was third with Bennett and Ryan Fearn lined up behind him.  Tom Fearn drifted up the track in turn 3 on lap-4 and slid back to seventh place as Ryan Fearn got by Bennett to move into third.  Al Saunders was fifth with Jim Mavlouganes up to sixth with Wray and Coury showing the way out front.  Mike O’Sullivan spun in turn 4 to bring the caution out with 9 laps complete.

Wray took the lead back under green with Bennett taking second from Coury.  Adam Gray followed suit and took third from Coury on lap-11 with Tom Fearn back up to fifth.  Under the caution period, Ryan Fearn brought his car to pit road where he eventually pulled behind the wall.  Mavlouganes did a 360 spin on lap-13 but kept going and the race stayed green.

Bennett was closing in on the back bumper of Wray for the lead with Gray closing in on Bennett’s back bumper.  Bennett made a move to the inside of Wray on lap-16 with Gray taking things 3-wide going into turn 3.  Bennett led the lap by a nose on the outside and he took the lead on lap-17.  Gray settled into second with Wray falling back to third.  Coury was now fourth in line with Tom Fearn fifth with 18 laps complete.

With 5 laps to go, Bennett was still in command with a comfortable lead over Gray in second.  Wray was third in line followed by Coury, Tom Fearn, Kevin Gambacorta, Cliff Saunders, Paul Arute, John Blake, and Al Saunders.  Bennett led the field to the checkered flag to pick up his first win of the 2021 season and his first Stafford late Model win since the 2017 season.  Gray finished second with Wray, Coury, and Tom Fearn rounding out the top-5. 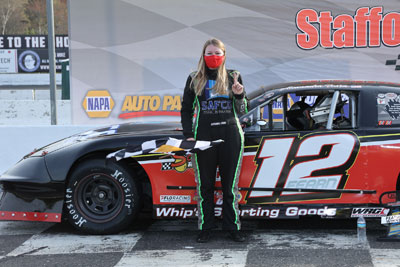 In the 20-lap Limited Late Model feature, Jeremy Lavoie took the early lead with Alexandra Fearn right behind him in second.  Gary Patnode was third in line followed by Matt Clement and Rich Hammann.

At the halfway point of the race, Lavoie and Fearn were still running nose to tail for the lead with Patnode in third, Hammann fourth, and Jay Clement fifth.  Fearn was able to finally get to the inside of Lavoie on lap-12 and she took the lead from Lavoie on lap-13.  R.J. Surdell spun coming out of turn 2 to bring the caution out with 15 laps complete.

Fearn’s car stumbled coming back up to speed on the restart, which allowed Lavoie to power his way into the lead but the caution came back out with 16 laps complete for a spin in turn 4 by Patnode.

Fearn had no problem coming up to speed on the restart as she powered into the lead with Lavoie in second.  Hammann was third in line followed by Jay Clement and Patnode was already back up to fifth after his spin.  Fearn led Lavoie to the checkered flag to pick up her first win of the season.  Hammann finished third with Jay Clement and Hopkins rounding out the top-5. 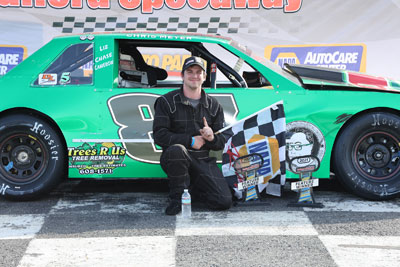 In the 20-lap Street Stock feature, Chris Meyer and Frank L’Etoile, Jr. led the field to the green.  Meyer immediately grabbed the lead with L’Etoile following in his tire tracks.  Travis Hydar was third in the early going with Nickolas Hovey fourth and Adrien Paradis, III fifth.  L’Etoile slowly reeled Meyer in and he took the lead from Meyer on lap-4.  Meyer came back to L’Etoile’s inside with a crossover move in turns 1+2 but settled back into second.  Johnny Walker spun in turn 1 to bring the caution out with 5 laps complete.

John Orsini got out of shape and came to a stop in the turn 4 grass to bring the caution out right after the restart.  The next restart attempt saw L’Etoile power back into the lead with Hydar pulling alongside Meyer for second.  Hydar took second from Meyer on lap-6 with Hovey in fourth and Daltin McCarthy in fifth.  Paradis was sixth followed by Bert Ouellette, Jason Finkbein, David Macha, Sr., and Tommy Hanley.  Christopher Phelps spun to bring the caution back out with 8 laps complete.

L’Etoile again took the lead on the restart followed by the side by side duo of Meyer and Hydar, Hovey, and McCarthy.  McCarthy spun in the middle of turns 3+4 to bring the yellow flag back out with 10 laps complete.

L’Etoile took the lead back under green while Hydar and Meyer were once again side by side for second place.  Hydar took the spot from Meyer on lap-12 with Hovey in fourth and Finkbein in fifth.  Paradis was sixth in line followed by Walker, Macha, Kyle Johnson, and Chris Danielczuk.  Tommy Hanley did a 360 spin in turn 2 but was able to keep going and the race stayed green.

Hydar was starting to apply heavy pressure to the back bumper of L’Etoile for the lead with 3 laps to go.  Hydar dove under L’Etoile going into turn 1 on lap-19 but he slid up the track which allowed L’Etoile to retake the lead  coming out of turn 2 and going down the backstretch.  Walker spun to bring the caution out with 19 laps complete to set up a green white checkered finish.

L’Etoile and Hydar brought the field to the green and they took the lead on the restart.  Coming out of turn 4 to the white flag, Meyer made a 3-wide move and he took the lead going into turn 1.  Hovey followed right on his back bumper and moved into second.  Hovey gave Meyer a tap to his back bumper in turns 3+4 but Meyer was able to hold him off to the checkered flag.  Finkbein finished third with Johnson fourth and L’Etoile fifth.