(Stafford Springs, CT)—iRacing is a one stop shop for Simracing. Returning for the 2019 season, iRacing.com, the global leader in online racing simulation, will present a weekly $125 bonus to the winner of the Late Model feature. Developed as a centralized racing and competition service, iRacing has evolved into the next generation of sim-racing software used by professional drivers and casual gamers alike. At Stafford, the list of drivers that prepare for the season by using the iRacing service is long with countless drivers improving their craft online.

“It’s really amazing how many drivers are on the iRacing platform,” explained Stafford Motor Speedway General Manager Mark Arute. “Pretty much all the young drivers are on iRacing, logging countless laps before they turn their first laps in a real car. The iRacing service helps them become competitive quickly and really fine tune their skills. We want to thank Tony Gardner and the entire team at iRacing for continuing their support of Stafford Speedway and the Late Model division.” 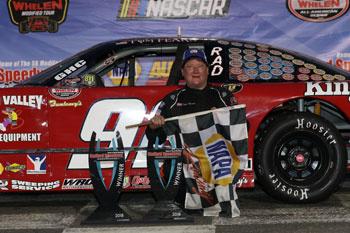 The 2018 Late Model season was dominated by Stafford veteran Tom Fearn. Fearn and the #92 team racked up an incredible 12 wins over 21 events and set multiple records including a summer stretch of 6 consecutive wins while also passing Ryan Posocco to become the all-time winningest driver in Stafford Late Model history. Fearn is set to return to Stafford weekly racing in 2019 in search of his 6th Stafford track championship but will have tough competition with nearly all of the top-10 in points returning to full-time competition in 2019.

Though the season was dominated by Fearn, 6 other drivers reached NAPA Victory Lane with Mike Wray, Glen Reen, and Darrell Keane each scoring 2 wins and Paul Arute, Al Saunders, and Kevin Gambacorta each scoring 1. Competition will be high in 2019 with many new names and returning drivers expected to compete including Scott Cook, Dave Wray, and Ed Ricard. Also expected to rejoin the Late Model field for select shows in 2019 is two-time Stafford Champion Adam Gray who is known for his aggressive driving style and is no stranger to NAPA Victory Lane. 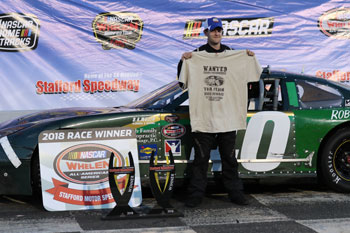 “The 2019 Late Model field is shaping up to be strong,” continued Stafford General Manager Mark Arute. “We have had a good group of drivers move into the Late Models from the Limited Late Model division and 2019 looks to have more of the same with both RJ Surdell and Ryan Fearn entering the Late Model ranks.”

To take the green flag for iRacing and join the thousands that compete online check out www.iRacing.com

The Late Model division kicks off their season at the 48th Annual NAPA Auto Parts Spring Sizzler® on April 26-28. Tickets for the “Greatest Race in the History of Spring” are on sale now at the Speedway Box Office. Tickets are priced at $40.00 for adult general admission tickets, $10.00 for children ages 6-14, and children ages 5 and under are admitted free of charge when accompanied by an adult. Reserved seating is priced at $45.00 for all ages. As always, Stafford Motor Speedway offers free parking with overnight parking available. All tickets are good for both Saturday and Sunday admission. All ticket prices include 10% CT Admission Tax. Discount Spring Sizzler® tickets will be available beginning in March at participating NAPA Auto Parts stores.