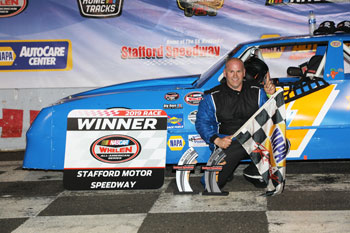 In the 30-lap Casagrande Builders Street Stock event, Adrien Paradis, III took the lead at the start but Jason Lafayette pulled alongside Paradis on lap-2 and he took the lead by a nose at the line. George Bessette, Jr. got by Paradis to move into second on lap-3 with Travis Hydar taking third. Meghan Fuller took fourth with Zack Robinson taking fifth on lap-5 and Mike Hopkins took sixth as Paradis slid all the way back to seventh place.

The top-5 ran in line until lap-10 when Fuller got by Hydar to move into third. Fuller’s move opened the door for Robinson to take fourth and drop Hydar back to fifth place.

At the halfway point of the race Lafayette was still holding the lead with Bessette giving chase. Robinson spun in turn 1 to bring the caution out with 17 laps complete.

The restart saw a pileup of cars going into turn 3 involving Chris Danielczuk, Tess Beyer, and Tyler Trott that brought the yellow and red flags out.

Lafayette and Bessette were side by side for the lead on the restart and they ran 2 laps door to door before Lafayette got clear in to the lead. Fuller then got by Bessette on lap-21 to move into second. Bessette settled into third with Hopkins up to fourth and Robinson was back up to fifth after his earlier spin.

With 5 laps to go, Lafayette and Fuller had stretched out their lead over Bessette in third. Steve Kenneway and Travis Hydar spun on the backstretch to bring the caution out with 28 laps complete and set up a green white checkered finish.

Lafayette and Fuller were side by side for the lead and they took the white flag still side by side with Bessette in third. Lafayette got clear of Fuller in turns 3+4 on the final lap and he took the checkered flag to pick up his first win of the 2019 season. Fuller held off Bessette for second with Robinson and Johnny Walker rounding out the top-5. 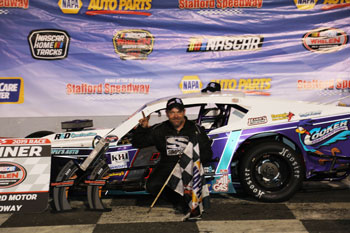 In the 40-lap SK Modified® feature event, Stephen Kopcik pulled out to the early lead with Joey Cipriano immediately applying heavy pressure. Ronnie Williams and was third with Glen Reen taking fourth from Tyler Hines after several laps of side by side racing. Hines spun in turn 3 and collected the car of Nick Salva to bring the caution out with 5 laps complete.

The race went back to green with the top 3 rows all side by side. Kopcik and Cipriano for the lead, Williams and Reen for third, and Hines and Andrew Molleur for fifth. Kopcik got clear to the lead on lap-7 with Williams moving into second. Reen and Cipriano were side by side for third before Reen took the position on lap-10. Todd Owen was up to fifth behind Cipriano with Molleur, Hines, and Michael Christopher, Jr. behind Owen.

Williams took the lead from Kopcik on lap-11 but Kopcik came back with a strong move to the inside of Williams on lap-13 to retake the lead. Williams got back to the inside of Kopcik on lap-15 and had the lead by a nose at the line. Reen was now right behind the lead duo of Williams and Kopcik with Owen in fourth and Cipriano in fifth. Christopher took sixth from Molleur on lap-18 with Dan Wesson in eighth place. David Arute brought the yellow out with a spin on the backstretch and 23 laps complete on the scoreboard.

Williams took the lead on the restart with Kopcik right behind him. Owen was third in line with Reen fourth and Wesson fifth. Tony Membrino, Jr. and Marcello Rufrano spun through the frontstretch grass to bring the caution back out with 25 laps complete.

Williams and Kopcik resumed their duel for the lead on the restart, racing side by side until lap-28 when Williams got clear into the lead. Owen worked his way into second with Kopcik back to third. David Arute came to a stop facing the wrong way on the track and Troy Talman spun through the backstretch grass to bring the caution out with 28 laps complete.

Williams took the lead on the restart with Owen slotting into second. Owen didn’t stay behind Williams for very long as he pulled to the inside of Williams on lap-30 and they ran side by side for the lead. Wesson and Matt Vassar touched coming down the frontstretch and Vassar had damage to his right front and went through the frontstretch and came back on to the track and collected the cars of Salva, Joey Ternullo, Jr., D.J. Burnham, Max Zachem and Rufrano to bring the caution out with 31 laps complete.

The restart saw Reen make a bold 3-wide move to get by both Williams and Owen and take the lead. Owen slotted into second right on Reen’s bumper with Williams, Eric Berndt, and Kopcik making up the top-5. Owen got to the inside of Reen on lap-34 and had the lead by a nose at the line. They ran lap-35 side by side with Owe again the leader by a nose before Owen got clear into the lad on lap-36.

As the leaders completed lap-38, Reen drove to the inside of Owen for the lead while Williams was right behind them in third. Kopcik and Berndt were side by side for fourth when the fast and furious action was interrupted by the caution flag, which flew with 38 laps complete for a spin on the backstretch by Ed Spiers and set up a green white checkered finish.

On the restart, there was a pileup on the backstretch involving Talman, Tom Bolles, Cory DiMatteo, Burnham, Wesson, and Hines that brought the caution back out. The next restart saw Owen and Reen side by sidd again with Williams and Bernd side by side behind them. The leaders took the white flag still side by side. Owen cleared Reen in turn 4 on the final lap and he picked up his second consecutive SK Modified® feature win. Reen nipped Williams at the line for second with Kopcik and Berndt rounding out the top-5. 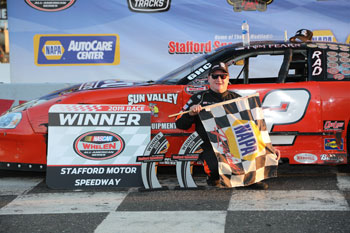 In the 30-lap Late Model feature event, Al Saunders spun in turn 3 to bring the caution out before a lap could be completed. Michael Bennett took the lead on the restart with Tyler Leary, Ryan Fearn, and Cliff Saunders lined up behind him. Tom Fearn quickly worked his way up to fifth before the caution flew again with 2 laps complete as Darrell Keane spun in turn 2 and Richard Ciriello spun on the backstretch.

Bennett took the lead again on the restart with Leary slotting into second. Ryan Fearn was third but Tom Fearn was all over his back bumper in fourth with Cliff Saunders fifth. Tom Fearn took third from Ryan Fearn on lap-6. Adam Gray was on the move as he moved into fifth on lap-7 as Cliff Saunders slid back in line to eighth place. Fearn got around Leary to move into second on lap-8 and he began to slowly chip away at the margin Bennett had built up out front.

The hot battle was now for fourth place with 12 laps complete as Gray was applying heavy pressure to Ryan Fearn. Gray was able to make the pass on lap-13 and he brought Al Saunders with him into fifth as Ryan Fearn slid back to sixth.

Tom Fearn caught Bennett on lap-20 and nearly made a pass in turn 2 but Bennett was able to hold him off. Leary was right behind Fearn in third and he was looking to get by both Fearn and Bennett to move in to the lead. Ryan Fearn spun in the middle of turns 1+2 to bring the caution out with 20 laps complete.

Bennett took the lead o the restart with Tom Fearn and Leary behind him. Kevin Gambacorta dropped off the pace on the restart and he limped back to pit road where he parked his car behind the wall.

The action at the front heated up on lap-23 as Fearn got by Bennett to take the lead. Bennett gave Fearn a tap in turn 4 and both cars got sideways with Fearn maintaining the lead while Al Saunders came through to second. Leary came to a stop in the middle of turns 1+2 to bring the caution back out with 25 laps complete.

Fearn took the lead back under green with Gray taking second. Al Saunders was third with Bennett fourth and Cliff Saunders side by side with Trace Beyer for fifth place. Gray couldn’t get close enough to Fearn to make a bid for the lead as Fearn scored his second consecutive win and third win of the 2019 season. 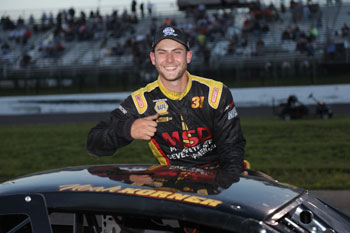 In the 20-lap SK Light feature event, Robert Bloxsom, III took the early lead with Wesley Prucker in second. Jonathan Puleo was third in line with Noah Korner and Bryan Narducci side by side for fifth. Prucker got by Bloxsom to take the lead on lap-6. Bloxsom came right back to the outside of Prucker but settled back into second. Narducci was now third with Puleo and Korner side by side for fourth.

Narducci was looking to take the lead from Hodgdon and he made the pass on lap-9. Teddy Hodgdon spun in the middle of turns 3+4 to bring the caution out with 9 laps complete. Alina Bryden spun coming out of turn 2 on the restart to bring the caution back out before a lap could be completed.

Narducci powered into the lead on the restart with Prucker in second. Korner and Bloxsom were side by side for third with Joey Ferrigno and Puleo side by side for fifth. Korner took second from Prucker on lap-13 and the caution came out with 13 laps complete as Mark Bakaj and Mikey Flynn touched with Bakaj taking a ride into the frontstretch grass.

Narducci took the lead on the restart with Korner moving into second. Prucker didn’t come up to speed as quickly as everyone else on the restart and he fell back to fifth as Steven Chapman took third and Puleo was fourth in line. Chapman was applying heavy pressure to Korner’s back bumper for second when the caution flew with 17 laps complete for a spin on the backstretch by Sami Anderson.

Narducci took the lead on the restart with Korner right behind him in second. Chapman and Puleo were side by side for third with Prucker holding off Alexander Pearl for fifth place. Korner couldn’t get close enough to Narducci to make a bid for the lead as Narducci took the checkered flag. Following post race inspection, Narducci’s car was found to be underweight after it lost lead on the track during the race and Puleo’s car exceeded the maximum left side weight allowed and both cars were penalized to the rear of the field with Narducci finishing 22nd and Puleo 23rd. This made Korner the winner for the second time in 2019 with Chapman, Prucker, Pearl, and Chris Matthews making up the top-5. 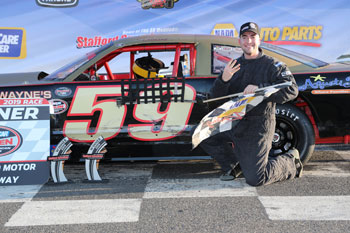 In the 15-lap Limited Late Model feature event, Alexandra Fearn and Matt Clement split Kyle Casagrande at the start to move into first and second with Jeremy Lavoie taking third as Casagrande slid back to fourth after getting loose in turn 1 on the start. Gary Patnode was fifth but he got by Casagrande to move into fourth on lap-3.

Clement made a move to take the lead with a pass coming out of turn 2 on lap-4. That move opened the door for Lavoie to follow Clement through and move into second and drop Fearn back to third in line. Patnode was still fourth with Casagrande rounding out the top-5.

With 10 laps complete, Clement still held the lead with Lavoie giving chase. Patnode made a move to take third from Fearn on lap-11 with Casagrande still running fifth.

Clement led Lavoie to the checkered flag to pick up his fourth win of the 2019 season. Patnode finished third with Fearn and Casagrande rounding out the top-5.