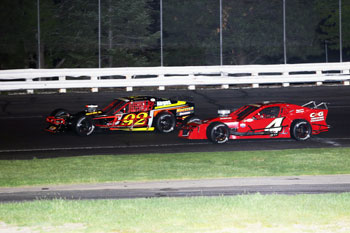 (Stafford Springs, CT)—When the Valenti Modified Racing Series comes to Stafford this Friday, August 31 for the Lincoln Tech 80, Jeff Gallup, driver of the #4 C+G Surfacing Chevrolet, will be looking to turn the speed that he has shown at Stafford during the 2018 season into a victory.

“Stafford is a premier half-mile track and we always look forward to racing there,” said Gallup. “Whenever we race at Stafford, it’s always a date that we have circled on the calendar and we love racing there whenever possible. Any time we go to Stafford we feel like we have a good shot at winning the race. The first time I was there in a tour modified I finished third so we’re hoping we can repeat that and maybe go a couple of spots better this time.”

Gallup led 30 laps in the May VMRS 80 and he ran in the top-5 in both Open Modified 80 shows that were held in June and July. Unfortunately he couldn’t maintain that speed throughout the entire 80 lap distances and his finishes of 10th, 12th, and 8th have been frustrating for the Monson, MA native. 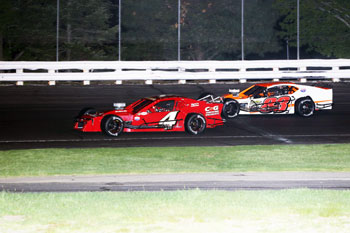 “It’s been frustrating at Stafford this year,” said Gallup. “We’ve led laps, we’ve been fast, and hopefully we can be fast again. I’m pretty confident with what we’re doing with the car. The key for me is making the tires last for 80 laps. We’ve shown that we have the speed to run with the leaders, we just need to be fast at the right point of the race. We need to go slower in order to go faster at the end of the race.”

Unlike the Open Modified 80 races where drivers could change tires during the race, VMRS rule dictate that drivers must run the qualifying heat race and the feature on the same set of tires. Gallup will have to devise a strategy behind the wheel that will allow him to show the speed at the end of the Lincoln Tech 80 as he has demonstrated in previous 3 Stafford starts this season.

“I usually put my race strategy together after running the heat race and see where we’re starting the race,” said Gallup. “If we start in the top-5 we can ride a little but if you start in the back, you want to get in the top-5 as quickly as you can to try to position yourself for the end of the race. We’re coming back with a similar setup as our other Stafford starts this year and hopefully the car will be just as good as it was earlier this season. I like to go as hard as I can in the heat race so I know what I have in the car for the feature.” 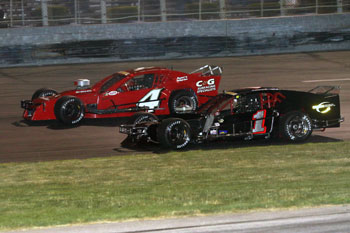 With Stafford being Gallup’s home track, he would like for nothing more than to join his father Richie on the Stafford winners list. Richie Gallup scored a total of 7 SK Modified® feature wins at Stafford between 1984 through 1992 and Jeff Gallup is confident that he will have a car that is capable of winning the Lincoln Tech 80.

“There’s always tough competition at Stafford with guys like Keith, Woody, and Chase in the 25 car, but the only reason we go to the rack is to win the race,” said Gallup. A win at Stafford would mean a lot to me. I’ve been watching races at Stafford since I was 5 years old and my dad has won a few SK races there so it would be nice to add my name to the winners list at Stafford too.”

Tickets for Friday night’s Lincoln Tech VMRS 80 are priced at $30.00 for adult general admission, $5.00 for children ages 6-14, and children ages 5 and under are admitted free when accompanied by an adult. Reserved seat tickets are $32.00 for all ages. All ticket prices include 10% CT Admission Tax. Stafford Motor Speedway offers plenty of free parking along with overnight parking available for self contained Recreational Vehicles. Grandstand gates will open at 5:15pm with VMRS qualifying heats starting at 6:30pm and feature events immediately following VMRS qualifying.