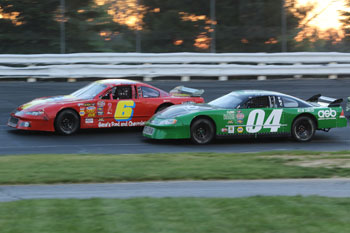 (Stafford Springs, CT)—With the 2017 season at Stafford Motor Speedway approaching the halfway mark, Limited Late Model driver Jeremy Lavoie is enjoying his best season to date at the Connecticut half-mile. Through the first 8 races, Lavoie has posted top-5 finishes in each of the 8 races behind the wheel of the #6 Aspen Hill Farms Ford, including his first career Limited Late Model feature victory on May 19th. Lavoie points to a new chassis as well as some help from chassis man Rob Russell for not only his speed, but his consistency.

“I think we’ve definitely honed in on the setup this season,” said Lavoie. “The car is really good and some people think we’re crazy because we’re still trying to find more speed in the car. I think there’s more speed to find and Rob Russell has been a big help for us with the chassis. We got a new front and rear clip from Rob Russell Chassis during the off-season and he’s been there for any information that we might have needed. He’s pretty excited to have 2 of his cars in the points lead between us and Glen Reen and he always checks in with us every Friday to see how we’re doing or if there’s anything we need, so a big thanks to Rob for all of his help. I think we felt we were going to be competitive with the new chassis and for us to continuously finish in the top-5 like we have so far, I think it’s pushed my team and myself to be better and think outside the box and not just settle for what we have. Everyone else is working on their cars to be better so we have to do the same because the competition is stiff in the Limited Late Model division. It’s been a thrill ride so far and I have my whole family behind me as my crew, my father Ken, my sister Marcy, my Aunt Gail and Uncle Gene, and my grandfather Joe. There’s also about 10 people in the stands each week with Aspen Hill Farms shirts on. Also a big thanks to Aspen Hill Farms and Gene’s Ford and Chevrolet, they’ve both poured a lot of money into our program and without their support, we couldn’t be where we are today.” 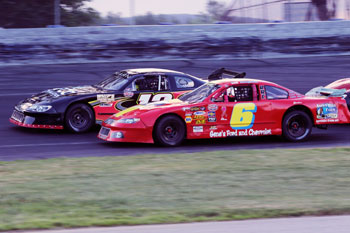 After winning 5 DARE Stock features in only two season, including 4 wins during the 2013 season, Lavoie entered the 2017 season still in search of his first Limited Late Model win. Lavoie notched that milestone back on May 19 and it marked a turning point for both Lavoie’s and his team’s confidence going forward.

“The win was huge for us,” said Lavoie. “To win in the Limited Late Model division is tough. They don’t give them to you, you really have to work for them and we had to work hard that night. I think there were about 4 or 5 restarts or more. Once you get that first one, you feel like you can do it again, you just have to be consistent and have a little luck on your side. It was a huge achievement for sure and I’m proud to be able to say I’ve won in both the DARE Stock and Limited Late Model divisions. The win opened a lot of eyes and all the competitors congratulated me afterwards, which really felt good to have the small racing community we have at Stafford offer me congratulations. After trying so hard and being so close to getting that win for the last 3 years, it felt like a huge weight was lifted off of my shoulders. It was an awesome feeling and no one can ever take that win away from us.” 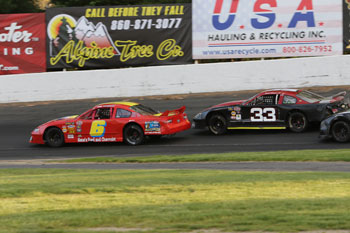 Lavoie is currently leading the points race in the Limited Late Model division, but he has several contenders close behind him. He leads defending Limited Late Model champion Duane Provost by only 8 points with Al Saunders 24 points behind in third and Bryan Narducci 26 points behind in fourth. Lavoie has previous experience racing for a championship during his 2013 season in the DARE Stock division in which he won 4 races, but he was lacking the one thing that he has found this season… consistency.

“Our main goal is to finish races,” said Lavoie. “If you don’t finish, you don’t get the points and you can lose a lot of points in just one race. I think patience is a big key. We don’t try to win the race on the first lap, and if you should lose a spot or two, you try to get those spots back a lap or two later. I’m not expecting to finish in the top-5 every week for the rest of the season because anything can happen, but if we could do that, it would be awesome. We go over the car every week to make sure it’s the best it can be when we get to the track on Friday and try to go to the front. We had one year in the DARE Stocks that we won 4 races, but the consistency just wasn’t there for us. Once we won a couple races that year, we had to add weight to the car and that really threw us off a bit. I think that having the same car to work with every week now will give us a better chance at staying towards the front. We just have to keep an eye on who we’re racing in the points and where they finish and where we finish. We also have to be smart and not do anything that would jeopardize a good finish.” 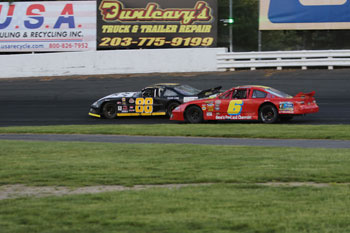 Lavoie and the rest of the Limited Late Model field will be back in action this Friday night, July 28th as part of the 5-Star Series program with a special appearance by the Wild Thing Karts Senior Champs division. Tickets for this Friday night’s program are priced at $17.50 for adult general admission tickets, $5.00 for children ages 6-14, and children ages 5 and under are admitted free of charge when accompanied by an adult. Reserved seat tickets are $20.00 for all ages. All ticket prices include 10% CT Admission Tax. Stafford Motor Speedway offers plenty of free parking along with overnight parking available for self contained Recreational Vehicles.